No free citizen of a self-governing Republic, should ever forget where we come from. Or the prices paid by our forebears, to get us here.

John McCrae was a physician and amateur poet from Guelph, Ontario. Following the outbreak of WWI, McCrae enlisted in the Canadian Expeditionary Force at the age of 41. He had the option of joining the medical corps based on his training and his age, but volunteered instead to join a fighting unit as gunner and medical officer. McCrae had previously served in the Boer War, this would be his second tour of duty in the Canadian military.

McCrae fought in one of the most horrendous battles of WWI, the second battle of Ypres, in the Flanders region of Belgium. Imperial Germany launched one of the first chemical attacks in history, attacking the Canadian position with chlorine gas on April 22, 1915. The Canadian line was broken but quickly reformed, in near-constant fighting that lasted for over two weeks.

Dr. McCrae later wrote to his mother, describing the nightmare. “For seventeen days and seventeen nights”, he wrote, “none of us have had our clothes off, nor our boots even, except occasionally. In all that time while I was awake, gunfire and rifle fire never ceased for sixty seconds … and behind it all was the constant background of the sights of the dead, the wounded, the maimed, and a terrible anxiety lest the line should give way”. 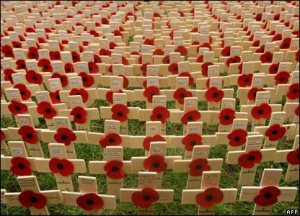 On May 3, Dr. McCrae presided over the funeral of his friend and fellow soldier Alexis Helmer, who had died in the battle. He performed the burial service himself, when he noted how quickly the red poppies grew on the graves of the fallen. He composed this poem the next day, while sitting in the back of an ambulance. 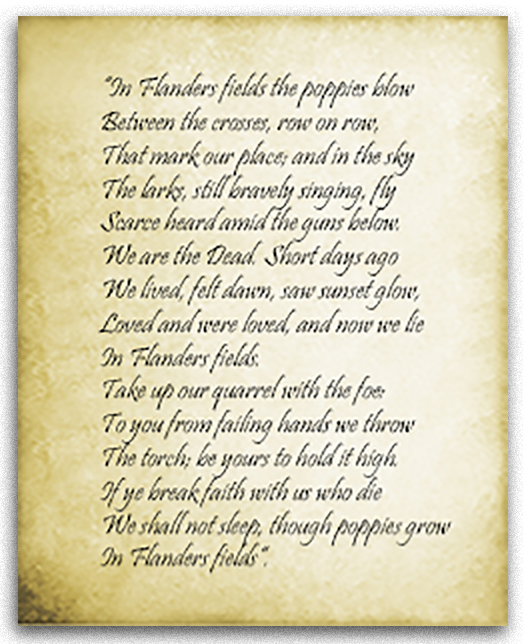 Moina Michael was browsing through the Ladies Home Journal when she came across McCrae’s poem. It was Saturday morning, November 9, 1918, two days before the armistice. She was so moved that she made a personal pledge to “keep the faith”, vowing always to wear a red poppy as a sign of remembrance of the dead. She scribbled down a response on the back of a used envelope, calling her poem “We Shall Keep the Faith“. 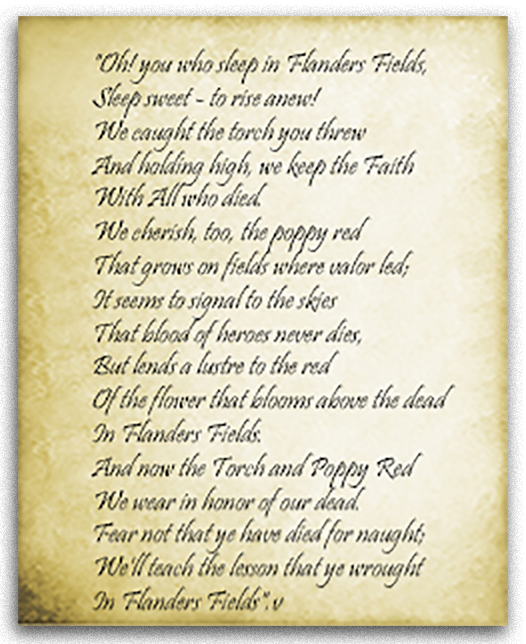 The vivid red flower blooming on the battlefields of Belgium, France and Gallipoli came to symbolize the staggering loss of life in that war. Since then, the red poppy has become an internationally recognized symbol of remembrance of the lives lost in all wars. I keep a red poppy pinned to my briefcase and another on the visor of my car.  A reminder that no free citizen of a self-governing Republic, should ever forget where we come from. Or the prices paid by our forebears, to get us here.