In 1872, American poet and author Julia Ward Howe proposed that the second of June be set aside each year, as a “Mother’s Day for Peace”.  While Howe’s effort proved unsuccessful, the modern conception of Mother’s Day was established 36 years later, by Anna Jarvis. 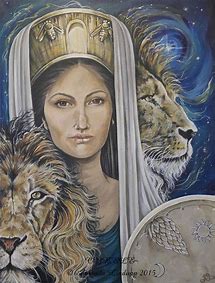 The earliest discernible Mother’s day dates back to 1200-700BC and descending from the Phrygian rituals of modern day Turkey and Armenia. “Cybele” was the great Phrygian goddess of nature, mother of the Gods, of humanity, and of all the beasts of the natural world, her cult spreading throughout Eastern Greece with colonists from Asia Minor.

Much of ancient Greece looked to the Minoan Goddess Rhea, daughter of the Earth Goddess Gaia and the Sky God Uranus, mother of the Gods of Olympus.

Over time the two became closely associated with the Roman Magna Mater, each developing her own cult following and worshiped through the period of the Roman Empire.

In ancient Rome, women partook of a festival, strictly forbidden to Roman men. So strict was this line of demarcation that only women were permitted even to know the name of the deity. For everyone else she was simply the “Good Goddess”. The Bona Dea.

In the sixteenth century, it became popular for Protestants and Catholics alike to return to their “mother church” whether that be the church of their own baptism, the local parish church, or the nearest cathedral. Anyone who did so was said to have gone “a-mothering”. Domestic servants were given the day off and this “Mothering Sunday”, the 4th Sunday in Lent, was often the only time when whole families could get together. Children would gather wild flowers along the way, to give to their own mothers or to leave in the church. Over time the day became more secular, but the tradition of gift giving continued.

Julia Ward Howe, the American poet and author best known for writing “The Battle Hymn of the Republic”, wrote an impassioned “Appeal to womanhood” in 1870, a pacifist reaction to the bloodshed of the Civil War, and the Franco-Prussian War. 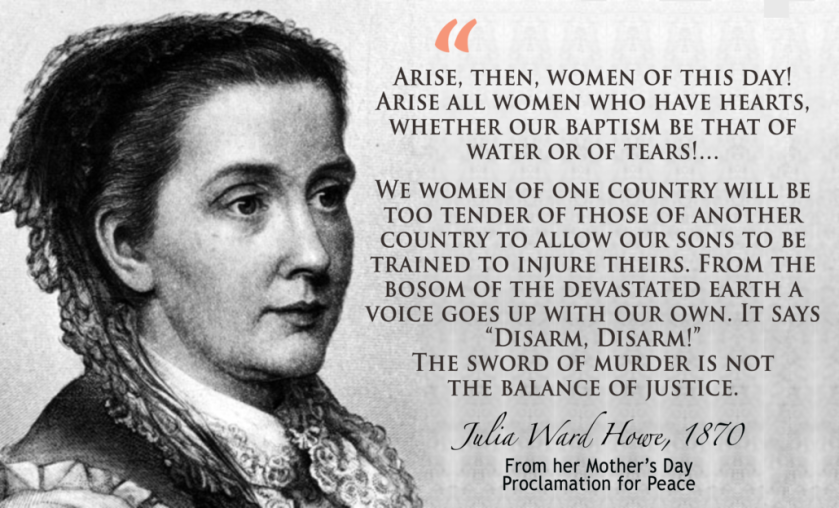 Two years later, Howe proposed that the second of June be set aside each year, as a “Mother’s Day for Peace”.  While Julia Ward Howe’s effort proved unsuccessful, the modern conception of Mother’s Day was established 36 years later, by Anna Jarvis. 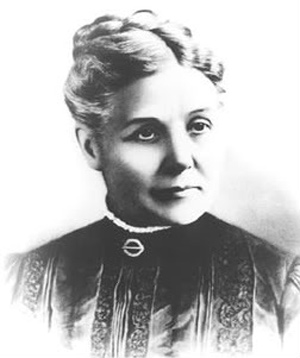 Ann Maria Reeves Jarvis was a social activist in mid-19th century western Virginia. Pregnant with her sixth child in 1858, she and other women formed “Mothers’ Day Work Clubs”, to combat the health and sanitary conditions leading at that time to catastrophic levels of infant mortality.  Jarvis herself gave birth between eleven and thirteen times in a seventeen year period.

Only four lived to adulthood.

Jarvis had no patience for the sectional differences that led the nation to Civil War, or which led her own locality to secede and form the state of West Virginia in order to rejoin the Union. Jarvis refused to support a measure to divide the Methodist church into northern and southern branches. She would help Union and Confederate soldier alike if she could. It was she alone who offered a prayer when others refused for Thornsbury Bailey Brown, the first Union soldier killed in the vicinity.

Following Jarvis’ death in 1905, her daughter Anna conceived of Mother’s Day as a way to honor her legacy and to pay respect for the sacrifices made by all mothers, on behalf of their children.

Anna Jarvis resolved that Mother’s Day be added to the national calendar and a massive letter writing campaign, ensued. On May 9, 1914, President Woodrow Wilson signed a measure declaring the second Sunday of May, to be Mother’s Day.

Anna Jarvis believed Mother’s Day to be a time of personal celebration, a time when families would gather to love and honor their mother.

She’d worked with the floral industry in the early days, to help raise the profile of Mother’s Day. By 1920, Jarvis had come to resent what she saw as the commercialization of the day. Greeting cards seemed a pale substitute for the hand written personal notes she’d envisioned.

Jarvis protested at a Philadelphia candy maker’s convention in 1923, deriding confectioners, florists and even charities as “profiteers”. Carnations had by this time become symbolic of Mother’s Day.  Jarvis resented that they were being sold at fundraisers. She protested at a meeting of the American War Mothers in 1925 where women were selling carnations, and got herself arrested for disturbing the peace.

Soon she was launching an endless series of lawsuits against those she felt had used the “Mother’s Day” name in vain.

During the last years of her life, Anna Jarvis lobbied the government to take her creation off of the calendar, gathering signatures door-to-door to get the holiday rescinded. The effort was obviously unsuccessful.  The mother of the modern Mother’s Day died broke and childless in a sanitarium in 1948, her personal fortune squandered on legal fees.

Today, some variation of Mother’s Day is observed from the Arab world to the United Kingdom. In the United States, Mother’s Day is one of the most commercially successful days of the year for flower and greeting card sales, and the biggest day of the year for long-distance telephone calls. Church attendance is the third highest of the year, behind only Christmas and Easter. Many churchgoers celebrate the day with carnations: colored if the mother is still living and white if she has passed on. This story is dedicated to two of the most beautiful women in my life.  Ginny Long, thanks Mom, for not throttling me all those times you could have.  And most especially, for all those times when you SHOULD have.  Sheryl Kozens Long, thanks for 25 great years.  Rest in peace, sugar.  I wish you didn’t have to leave us, quite so soon.