From catering the wedding reception of a President to feeding millions of GIs in World War 2, the most familiar face on your supermarket shelf was no figment of an ad-exec’s imagination.

He’s one of the most familiar faces on the supermarket shelf, right up there with Aunt Jemima and the Pillsbury Doughboy. That smiling, grandfatherly face with the red bandana and the tall chef’s hat. Like those other two a fictional character, the product of some brand development meeting, produced by the art department and focus-grouped by panels of consumers. As the story goes, the face behind the spaghetti and meatballs is the amalgamation of three names, the men behind the company:  Boyd, Art and Dennis.

Only in this case, Boyd, Art & Dennis are the fictional characters.  The face you remember pulling out from your old Dukes of Hazard lunchbox was quite real, I assure you. I’ve been best buddies with one of his relatives, for nigh on fifty years.

Some 25 million legal immigrants passed through Ellis Island between 1892 and 1924, among them Ettore Boiardi, Born in Piacenza, Italy, in 1897.  By age 11, Boiardi was assistant chef at “La Croce Bianca“.  The boy moved to Paris and then to London, honing his restaurant skills along the way.  He arrived at Ellis Island on this day in 1914, age 16 and following his brothers Mario and Paolo to the kitchen of the Plaza Hotel in New York.

The Plaza Hotel menu was heavy on the French in those days and Ettore began to add some Italian. A little pasta, a nice tomato sauce.  Before long, he was promoted to head chef.

According to his New York Times obituary, Boiardi was so talented that President Woodrow Wilson chose the man to cater the reception for his marriage to his second wife Edith, in 1915.

After World War 1, Boiardi supervised a homecoming dinner at the White House, for 2,000 returning soldiers.

Boiardi’s spaghetti sauce was famous by this time.  Ettore and his wife Helen opened a restaurant in Cleveland in 1926, Il Giardino d’Italia (The Garden of Italy), patrons often leaving with recipes for his sauces and samples, packed in cleaned milk bottles. It wasn’t long from there before the two were giving cooking classes and selling sauce, in milk jugs.

Maurice and Eva Weiner were patrons of the restaurant, and owners of a self-service grocery store chain. The couple helped develop large-scale canning operations. Before long Ettore and Mario bought farm acreage in Milton Pennsylvania, to raise tomatoes. In 1928, they changed the name on the label, making it easier for a tongue-tied non-Italian consumer, to pronounce.  Calling himself “Hector” for the same reason, Ettore said “Everyone is proud of his own family name, but sacrifices are necessary for progress.”

Meanwhile back in New York, Paolo (now calling himself “Paul”), made the acquaintance of one John Hartford, President of A&P Supermarkets. The Chef Boy-Ar-Dee company, was on the way.

During the Great Depression, Hector would tout the benefits of pasta, praising the stuff as an affordable, hot and nutritious meal for the whole family.

World War II saw canning operations ramped up to 24/7 with the farm producing 20,000 tons of tomatoes at peak production and adding its own mushrooms, to the annual crop. The company employed 5,000 people producing a quarter-million cans, a day.  Troops overseas couldn’t get enough of the stuff.  For his contribution to the war effort, Hector Boiardi was honored with the Gold Star for Excellence, by the War Department. 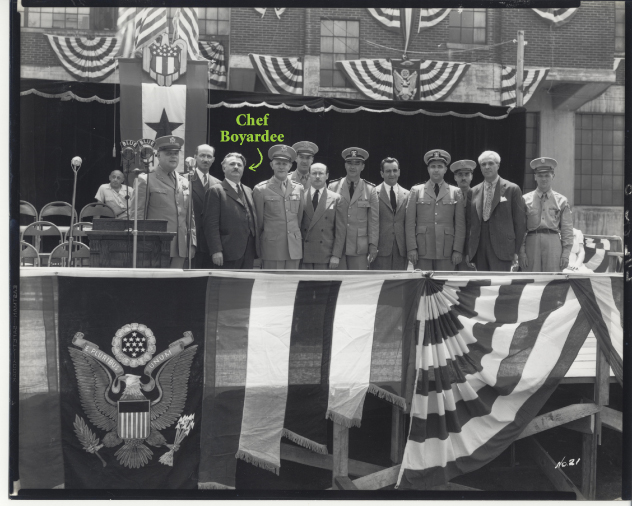 Such rapid growth is never without problems, particularly for a family business. Hector sold the company to American Home Foods in 1946, for the reported sum of $5.96 million.

Boiardi stayed on as company spokesman and consultant until 1978.  Forty years later, Advertising Age executive Barbara Lippert named the 1966 Young & Rubicam “Hooray for Beefaroni” ad patterned after the Running of the Bulls, as the the inspiration for Prince Spaghetti’s “Anthony” series and the famous “Hilltop” ad for Coca Cola.

One of the great “rags to riches” stories of our age, Hector Boiardi continued to develop new products until his death in 1987, amassing an estimated net worth of $60 million dollars.  He is survived by his wife of 64 years and the couple’s one son, Mario.  His face may be found smiling back from your grocery store shelf, to this day. 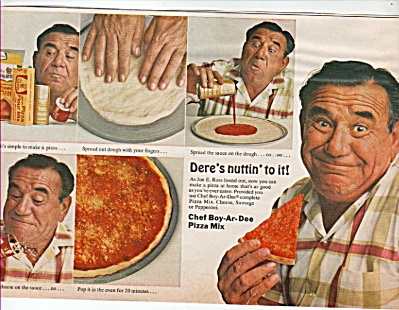