The little fox terrier Titina would accompany Captain Nobile on his every mission. This time she resisted, with everything a little dog could muster.  Maybe it was a premonition, and maybe not.  For the first time Nobile ignored the little dog’s behavior and picked her up, to bring her on board. 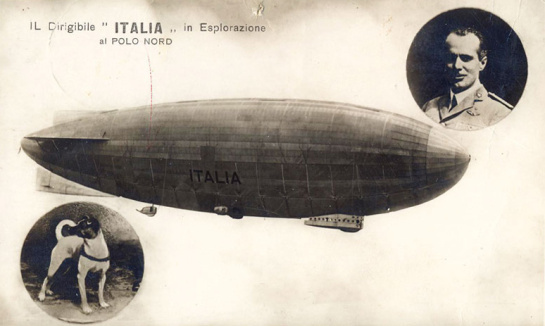 The semi-rigid airship Italia departed from Milan on April 15, 1928, headed for the Arctic.  Italia carried some 17,000 pounds of fuel and supplies, a crew of 13, two journalists, three scientists and an expedition mascot.

A favorite of the rising Fascist party in Italy, Captain Umberto Nobile was never far from his beloved dog, a little Fox Terrier he called Titina.

Before each mission, Nobile would pay close attention to the mood and demeanor of the terrier.  Some said even more so, than to that of his men.

Titina would accompany Nobile on his every mission but this time she resisted, with everything a little dog could muster.  Maybe it was a premonition, and maybe not.  For the first time Nobile ignored the little dog’s behavior and picked her up, to bring her on board.

Two years earlier, the Norge (“NOR-gay”) had demonstrated that such an airship, could reach the north pole.  This time they were coming back, for further exploration.

The first of five planned sorties began on May 11, before turning back only eight hours later in near-blizzard conditions.  The second trip took place in virtually perfect weather conditions with unlimited visibility.  The craft covered 4,000 km (2,500 miles), setting the stage for the third and final trip.

Strong tailwinds aided the passage as Italia traveled north along the Greenland coast, arriving at the north pole only 19 hours after departing Spitzbergen.

Though wind conditions prevented scientists from descending onto the ice sheet, the midnight arrival was itself, a victory.  Nobile dropped an Italian flag at the pole and a cross, personally given him by the Pope.  Jubilant radio messages were sent as the triumphant crew polished off a bottle of cognac, in celebration.

Trouble began almost immediately, as the tailwinds that brought them to the pole were now strong headwinds heading south to King’s Bay. Fuel consumption was doubled as the airship struggled to make headway.  After 24 hours, they were only halfway back.

A cascade of events took place on the morning of the 25th, causing Italia to be tail-heavy and falling at a rate of two feet per second. Captain Nobile ordered Chief technician Natale Cecion to dump ballast chain, but the steep deck angle complicated the task. Seconds later, the airship hit the jagged ice below, smashing the control cabin and spilling ten crew members and a Fox Terrier, onto the ice.

“The wide 50-meter-long red strip of aniline paint that had seeped from the spherical containers the airship’s crew used for measuring altitude resembled a bloodstained trail left by an injured beast”. – Czechoslovakian physicist, Frantisek Behounek

With a broken leg and feeling as though his intestines were damaged beyond repair, Captain Nobile thought to himself, at least he wouldn’t have to witness the prolonged death agonies, of his comrades.  Senior Cecione likewise suffered a broken leg.  Engine operator Vincenzo Pomella was already dead.

Now relieved of the gondola’s weight, the envelope of the ship began to rise with a gaping tear where the control cabin used to be.

What followed was a pure act of selfless heroism, a remarkable display of calm under the most extreme sort of pressure. As the airship

floated away, Chief Engineer Ettore Arduino threw everything he could get his hands on, down to the men on the ice. These were supplies intended for the descent to the pole, but they were now the only thing that stood between life and death.

Arduino himself and the rest of the crew drifted away with the now helpless airship.

Ten men and a dog were stranded on the drifting ice pack.

Those who were able to  do so immediately set about, searching for supplies.  They scavenged across the ice and found a radio, and jury-rigged a mast from crash debris.  A tent was set up and dyed a bright red, using that same aniline paint.

A colt revolver was found along with a box of cartridges.  Five days later, Swedish meteorologist Finn Malmgren would use it to kill a polar bear, adding considerably to their food supplies.

The aftermath of the Italia disaster is a story in itself, a rescue unfolding over nearly two months and involving six countries, 18 vessels, 21 aircraft and 1,500 men.  Many would-be rescuers became stranded themselves or vanished into the arctic, never to be seen again.  Rescue operations were brought to a halt with seventeen dead, between Italia’s crew and her rescuers.

The famous polar explorer Raould Amundsen, the man who first reached the pole in 1926, disappeared on June 18 while on a rescue mission with Norwegian pilot Leif Dietrichson, French pilot René Guilbaud, and a three-man French crew.

The American woman Bess Magids, engaged to be married to Amundsen, was already on the way to Norway, for the wedding that would never take place.

Forty-nine days would come and go, before the last of the crash survivors and stranded would-be rescuers, would be found.  The red tent was relocated several times to avoid getting wet, on the shrinking ice pack

Umberto Nobile was a subject of scorn, for allowing himself to be rescued before his men.  And for bringing Titina, thus elevating the life of the dog over the lives of his men.   Titina herself was sick with scurvy when rescued from the ice and went to a dentist, to have several teeth removed.  Rumor has it that Nobile had them replaced, with gold teeth.

The fate of the journalist, the three mechanics and the scientist who drifted away on the Airship Italia remains a mystery, to this day.