Taken individually, either power possessed the potential to destroy the world order.  The mind can only ponder the great good fortune of we who would be free, that these malign governments turned to destroying each other.

In the 18th century, the Founding Fathers gave us a Republic, centered on individual liberty, delegated and diffuse authority and checks & balances. Unique in world history, it was a governing model, based on an idea.

In this election year of peace and prosperity, news media and candidates alike speak of “Socialism”.  A top down ideology where individual liberty is subsumed by the collective, and cosmic chance is all that separates benign governance, from authoritarianism.

Taken individually, either power possessed the potential to destroy the world order.  The mind can only ponder the great good fortune of we who would be free, that these malign governments turned to destroying each other.

The Nazi conquest of Europe began in 1938. Within two years, every major power on the European mainland was either neutral, or occupied.  Great Britain alone escaped Nazi invasion, as the shattered defenders of the island nation fled the beaches of Dunkirk.

The National Socialist “Thousand-year Reich” was allied for a time with the Union of Soviet Socialist Republics, thanks to the Molotov-Ribbentrop non-aggression pact of August, 1939.

We in the west understand World War 2 in terms of European and Pacific “Theaters”.  Yet the most shattering conflict of this most destructive war in history unfolded not in those places, but the Eastern Front, between the two former allies.

This was a Race war, Slav against Teuton.  The Ragnarök of Norse mythology.  The all-destroying Götterdämmerung of Wagnerian opera.  Of an estimated 70–85 million deaths attributed to World War II, approximately 30 million occurred on the Eastern Front.  95% of all Wehrmacht casualties between 1941 and 1944, took place on the “Ostfront”.  The former allies fought out the most ferocious battle of that bloodiest theater of the war, in the streets and the sewers of Stalingrad.

Wilfred von Richtofen, cousin of the famous “Red Baron” of WWI, opened up with his heavy bombers on August 23rd, dropping over 1,000 tons of high explosive on Stalingrad.

Most of the cattle, grain and rail cars surrounding the city were shipped out, in advance of the German assault.  Government propagandists boasted of the “harvest victory”, and yet most of Stalingrad’s civilian residents remained, leaving the city short of food.  Making matters worse, the Luftwaffe bombed Volga River shipping, sinking 32 vessels and crippling another 9 in the narrow waterway.  The most vital link in the city’s supply chain, was cut off.

In the beginning, Soviet defense suffered extreme manpower shortages.  One part of the early defense fell to the 1077th Anti-Aircraft Regiment, a primarily female unit comprised of young volunteers with little training and the wrong weapons to engage ground targets. These women were all alone at this point with no support from other units, yet they traded shot for shot with the German 16th Panzer Division until all 37 AA guns had been wiped out or overrun. When it was over, 16th Panzer soldiers were amazed to learn, they had been fighting women.

Stalingrad was quickly reduced to rubble, with the German 6th Army controlling 90% of the city.  Still, the the Soviet defense held on.  General Vasily Chuikov commanding the weak 62nd army well understand the overwhelming power of the Blitzkreig and insisted on “Hugging the Enemy”, to nullify German air power.

With backs to the Volga, they fought for the very sewers of the city, men and women alike reduced to a primitive level of existence. The Germans called it “Rattenkrieg”. “War of the Rats”.  One German infantryman wrote home to his family, “Animals flee this burning hell of a city. The hardest stones do not last for long. Only men endure”.

As many as 80,000 Red Army soldiers lay dead by the middle of October, 1942. Counting German losses and civilian deaths, the battle cost a quarter million lives up to this point. And it was barely halfway over. 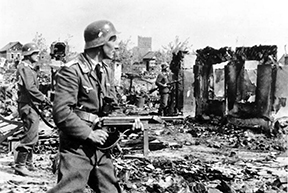 Ice floes in the Volga further cut off supplies.  Defenders were reduced to cannibalism as a massive Soviet counter-attack assembled on the German’s exposed left flank.

By November, General Georgy Zhukov had assembled over a million fresh troops and three Air Armies, for the assault on Stalingrad.  1,500 tanks and 2,500 heavy guns arrived fresh from the factory, many departing with paint, still wet.

The rumble of artillery, the “Great Soviet God of War” could be heard across the steppe as the Soviet counter-attack commenced in a blinding snowstorm on November 19, 1942.

German General Friedrich von Paulus sent a telegram to Adolf Hitler, requesting permission to withdraw.  The response from the Fuhrer:  the 6th Army should fight “to the last soldier and the last bullet.”  Von Paulus send a second telegram on the 22nd.  The 6th Army was surrounded. 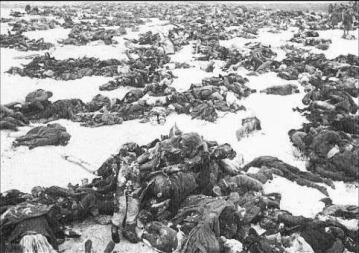 German forward movement came to an end on the Eastern Front in February, 1943, when 91,000 freezing, wounded, sick and starving Germans surrendered to the Red Army.

Even then, thousands of troops refused to lay down arms and continued to fight from the cellars and the sewers, holding on until early March.

Disease, death marches, cold, overwork, mistreatment, and malnutrition all took their toll on the prisoners.  Nearly 110,000 went into captivity following the Battle of Stalingrad.  Fewer than 6,000 lived to return to Germany.

Nigh on 80 years later, my fellow Americans face one of history’s “hinge” moments.  Do we choose the self-governance of We the People, with all of its many warts and short-comings.   Or do we abandon self-government to cosmic chance, and the rule of a self-interested, few.