By day 9 of the evacuation, 338,226 soldiers had been rescued from the beach.  For those, the “Miracle of Dunkirk” ended on June 4.  For approximately 40,000 British and another 40,000 French soldiers left behind in the confusion, a special kind of hell had just begun. 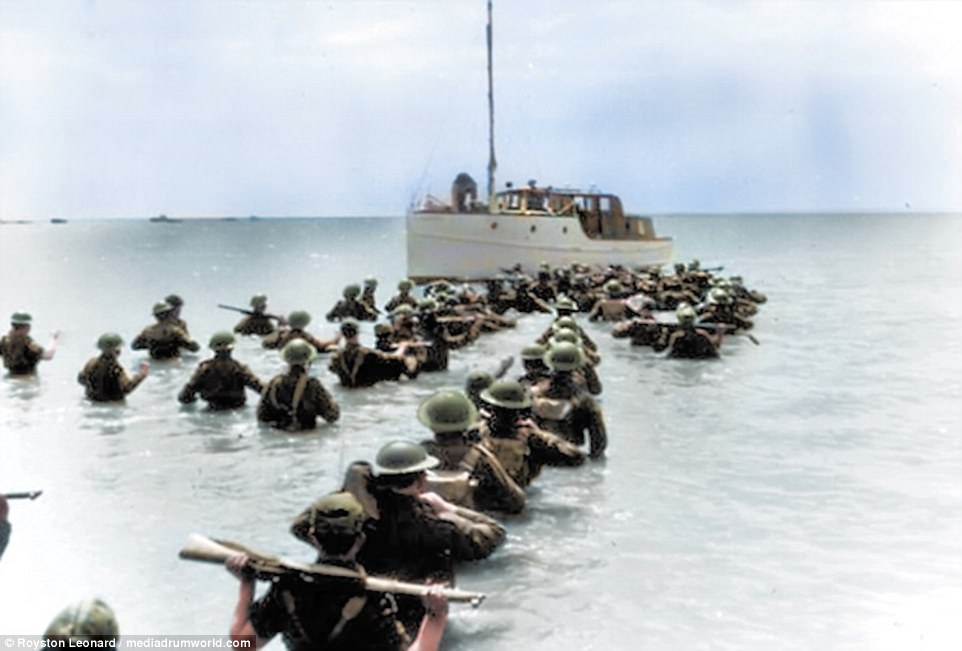 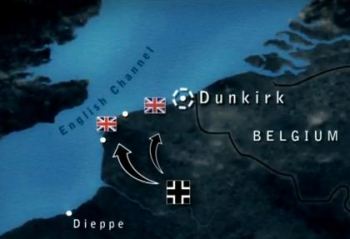 The island nation of Great Britain alone escaped occupation, but British armed forces were shattered and defenseless in the face of the German war machine.

In May 1940, the British Expeditionary Force (BEF) and what remained of French forces occupied a sliver of land along the English Channel. Field Marshall Gerd von Rundstedt called a halt of the German armored advance on May 24.  Reichsmarschall Hermann Göring urged Hitler to stop the ground assault, and let the Luftwaffe finish the destruction of the adversary. On the other side of the channel, Admiralty officials combed every boatyard for miles, for boats to ferry its people off of the beach. 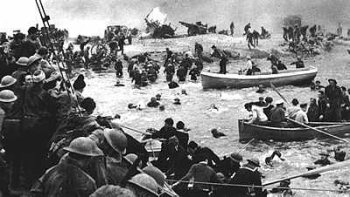 Hitler ordered his Panzer groups to resume the advance on May 26, while a National Day of Prayer was declared at Westminster Abbey. That night Winston Churchill ordered “Operation Dynamo”. One of the most miraculous evacuations in military history had begun from the beaches of Dunkirk. 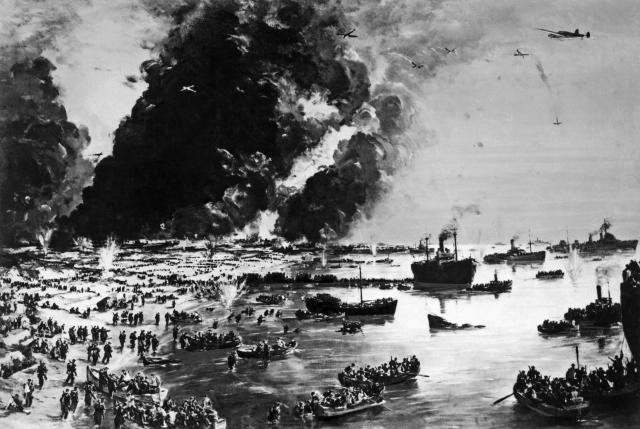 A thousand copies of navigational charts helped organize shipping in and out of Dunkirk, as buoys were laid around Goodwin Sands to prevent strandings. Abandoned vehicles were driven into the water at low tide, weighted down with sand bags and connected by wooden planks, forming makeshift jetties. 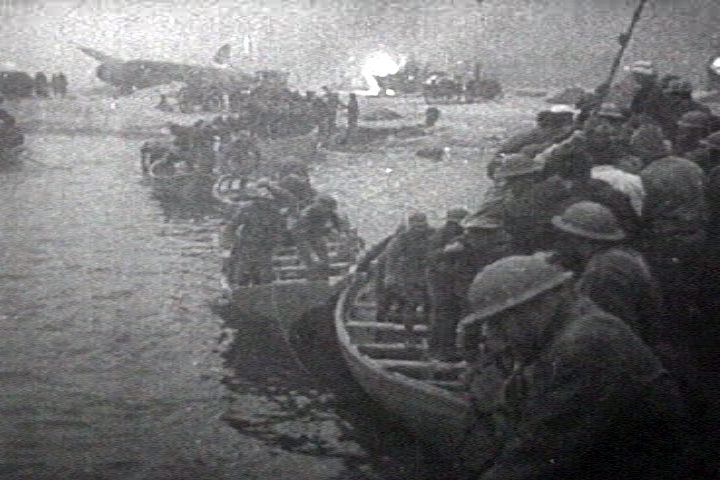 7,669 were evacuated on the first full day of the evacuation, May 27, and none too soon.  The following day, members of the SS Totenkopf Division marched 100 captured members of the 2nd Battalion of the Royal Norfolk Regiment off to a pit, and machine gunned the lot of them.  A group of the 2nd Battalion of the Royal Warwickshire Regiment were captured that same day, herded into a barn and murdered with grenades.

By day 9 of the evacuation, 338,226 soldiers had been rescued from the beach.  For those, the “Miracle of Dunkirk” ended on June 4.  For approximately 40,000 British and another 40,000 French soldiers left behind in the confusion, a special kind of hell had just begun. 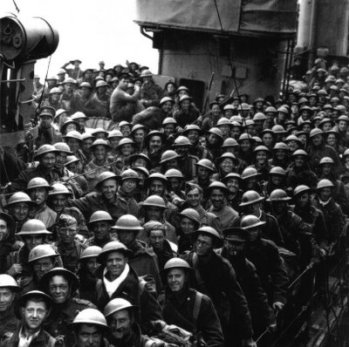 Most light equipment and virtually all heavy equipment had to be left behind, just to get what remained of the allied armies out alive. But now, with the United States still the better part of a year away from entering the war, the allies had a military fighting force that would live to fight on.

Winston Churchill delivered a speech that night to the House of Commons, calling the events in France “a colossal military disaster”. “[T]he whole root and core and brain of the British Army”, he said, had been stranded at Dunkirk and seemed about to perish or be captured. In his “We shall fight on the beaches” speech of June 4, Churchill hailed the rescue as a “miracle of deliverance”.

On the home front, thousands of volunteers signed up for the “stay behind” mission, expected to follow. With German invasion all but imminent, their mission was to go underground and disrupt and destabilize the invaders, in any way they could. These were to be the British Resistance, a guerrilla force reportedly vetted by a senior Police Chief so secret that, the man was to be garroted in case of invasion, to prevent membership in the units from being revealed.  Many were issued suicide pills in case of capture yet, thanks to these men and women, Great Britain was the only nation of the WW2 era to have a fully operational resistance, BEFORE occupation. 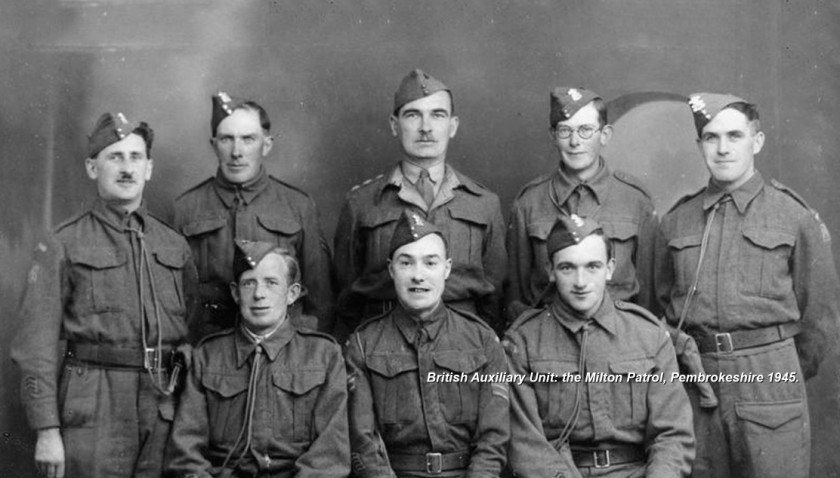 Participants in these auxiliaries were not allowed to tell their families what they were doing, or where they were.  They generally passed themselves off as Home Guard, a home defense organisation operated by the British Army.  Bob Millard, who passed away in 2014 at the age of 91, said they were given 3 weeks’ rations.  Even Josephine, Millard’s wife of 67 years, didn’t know a thing about the auxiliaries until their reunion, in 1994. “You just didn’t talk about it, really”, he said. “As far as my family were aware I was still in the Home Guard. It was all very hush hush. After the war, it was water under the bridge”.

Another under-recognized group from the period are the young men conscripted to serve in the coal mines of the United Kingdom.  One in ten conscripts of the time received not a uniform, but the hard hat and steel-toed boot of the coal miner.  Often maligned as “Conchies” (conscientious objectors) or worse, these were held in service for as long as two years after the war, condemned to live the life of the Troglodyte with no expectation of peacetime jobs being held for them, as for those who served in uniform.

These “Bevin Boys”, so-called after Minister of Labor Ernest Bevin, would wait decades for recognition of their contribution to the war effort, full acceptance coming only as the result of a speech given by Queen Elizabeth II, fifty years after VE Day.

The word “Cenotaph” literally translates as “Empty Tomb”, in Greek. Every year since 1919 and always taking place on the Sunday closest to the 11th day of the 11th month, the Cenotaph at Whitehall is the site of a remembrance service, commemorating British and Commonwealth servicemen and women who died in the conflicts of the 20th century. Since WWII, the march on the Cenotaph includes an ever-decreasing number of Home Guard and the Bevin Boys, without whom the war effort would have ground to a halt.

In 2013, five short years ago, the last surviving auxiliers joined their colleagues, proudly marching past the Cenotaph for the very first time.  Historians from the Coleshill Auxiliary Research Team (CART) had been trying to do this for years.

CART founder Tom Sykes said: “After over 70 years of silence, the veterans of the Auxiliary Units and Special Duties Section, now more than ever, deserve to get the official recognition that has for so long been lacking. ‘They were, in this country’s hour of need, willing to give up everything, families, friends and ultimately their lives in order to give us a fighting chance of surviving“.