There are different versions of the story, but they all end up with Billy Sianis and his pet goat Murphy being thrown out of the game and casting a curse on the team. “Them Cubs”, he said, “they ain’t gonna win no more”.

For a Red Sox guy, there was nothing sweeter than the 2004 World Series victory, putting to rest the “Curse of the Bambino”.  Babies grew up and had babies of their own during that time. They had grandchildren and great grandchildren and even a few great-greats, and still.  The drought wore on.  For an arid span 86 years, one of the longest World Series championship dry spells in Major League Baseball history.

Yet the suffering of We who love the Red Sox™ pales in comparison, with the 108-year drought afflicting the Chicago Cubs.  And they say it’s the fault of Billy goat.

It was October 6, 1945, game four of the World Series between the Cubbies and the Detroit Tigers, with Chicago home at Wrigley Field.  The atmosphere was festive.  Electric.  The first post-season for America’s pastime, since the most destructive war in human history, bringing with it hopes for the first Cubs World Series victory, since back-to-back championships in 1907/1908

Billy Sianis, owner of the Billy Goat Tavern in Chicago, bought tickets for himself and his pet goat “Murphy”. 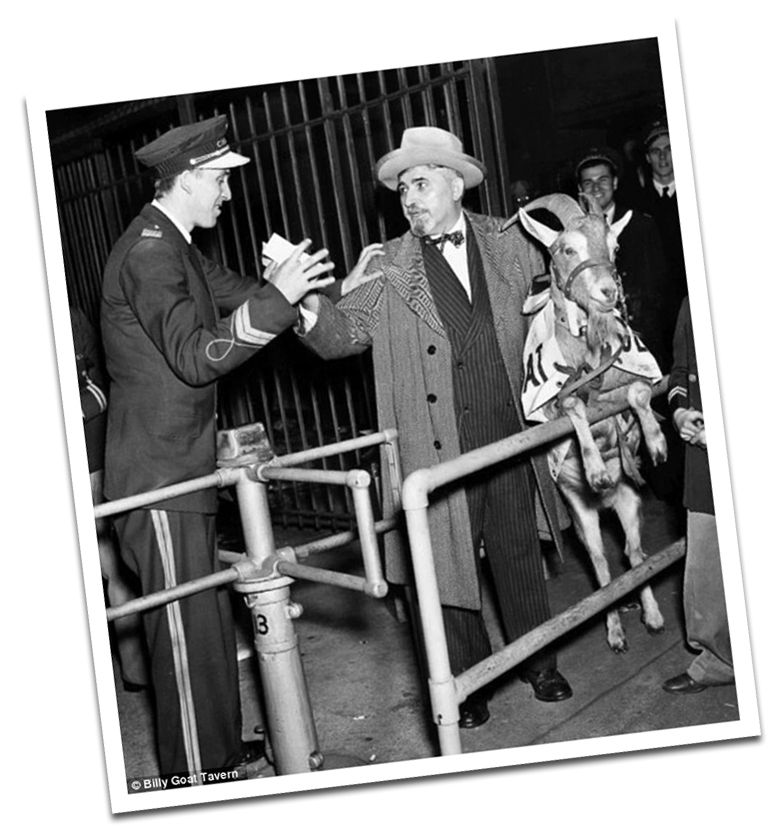 Anyone who’s ever found himself in the company of a goat understands the problem. Right?  There are different versions of the story, but they all end up with Billy and Murphy being thrown out of the game and casting a curse on the team. “Them Cubs”, he said, “they ain’t gonna win no more”.

In 2003, the year of the goat on the Chinese zodiac, a group of Cubs fans brought a goat named “Virgil Homer” to Houston, during the division championship series. They couldn’t get him into Minute Maid Park, so they unfurled a scroll outside and proclaimed the End of the Curse.

That got the Cubbies through the series, but the curse came roaring back in game 6 of the National League championship. It was Cubs 3, Florida Marlins 0 in the 8th inning of game 6.  Chicago was ahead in the series, when lifelong Cubs fan Steve Bartman deflected what should have been an easy catch for Chicago outfielder Moisés Alou.

Alou slammed his glove down in anger and frustration. Pitcher Mark Prior glared at the stands, crying “fan interference”.  The Marlins came back with 8 unanswered runs in the inning. Steve Bartman required a police escort to get out of the field alive.

The Florida Marlins taunted the Cubs in August 2009, parading a goat in front of the Cub’s dugout between the second and third innings. Cubs’ manager Lou Piniella was not amused, though the Cubs squeaked by with that one, 9-8. 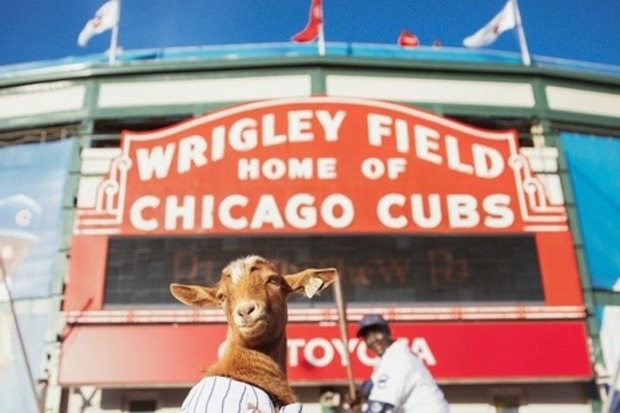 Five fans set out on foot from Cubs’ Spring Training facility in 2012, accompanied by a goat.  Calling the effort “Crack the Curse”, the group hiked 1,764 miles from Mesa, Arizona to Wrigley Field. The effort raised a lot of money for the Fred Hutchinson Cancer Center, but did nothing to lift the Curse of the Billy Goat.

Red Sox fans are well aware of the infamous choke in game 6 of the ‘86 World Series, resulting in the gag “What does Billy Buckner have in common with Michael Jackson? They both wear one glove for no apparent reason”. With due respect to Mr. Buckner, he was far better than that story would have you believe, there’s something my fellow Sox fans may not know.  The former Cub 1st Baseman was wearing a Chicago batting glove under his mitt.  For “luck”.

A philanthropic enterprise sprang up in 2011 called “Reverse the Curse”, selling goat milk lip balms, soaps and more, and, according to their website, “[C]ollaborating with an institution that provides technical cooperation for agriculture in the U.S., Dominican Republic and Haiti to develop goat breeding centers, vegetable gardens, and chicken farms for small producers”.

2015 was once again the Year of the Goat on the Chinese zodiac. That September, five “competitive eaters” consumed a 40-pound goat in 13 minutes and 22 seconds at Chicago’s “Taco in a Bag”. The goat was gone. Surely that would work. 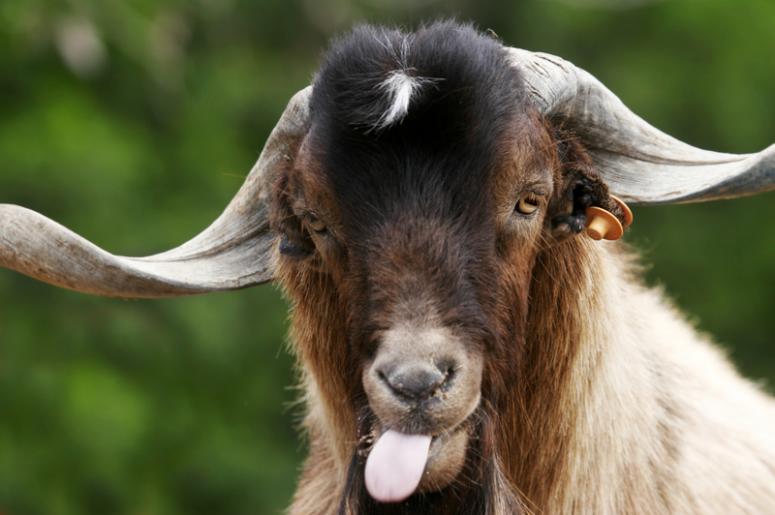 Mets 2nd baseman Daniel Murphy was NLCS MVP that year, setting a postseason record for consecutive games with a home run. Mets fans quipped that, Murphy may be the Greatest of All Time (G.O.A.T.), but he wasn’t the first.

As the 2017 season drew to a close, the Chicago Cubs found themselves defending World Champions.  That’s right. On October 22, 46 years to the day following the death of Billy Sianis, the Cubbies defeated the LA Dodgers 5–0 to win the 2016 National League pennant.

The mother of all droughts came to a halt on November 2 in a ten-inning cardiac arrest that had all of us up, Way past midnight.  On a school night, no less.  Personally, I even watched that 17-minute rain delay.  And I’m a Red Sox guy.

So it was, the drought has ended.   Steve Bartman has emerged from Chicago’s most unforgiving doghouse, his way now lit by the 108 diamonds of his very own World Series ring.  Billy Sianis and Murphy may, at long last, rest in peace.  The curse is broken.

In reading up for this story, I learned that the 1913/1914 Milwaukee Brewers roster included a nanny goat, named Fatima. No, really. I wouldn’t kid you about a thing like that. 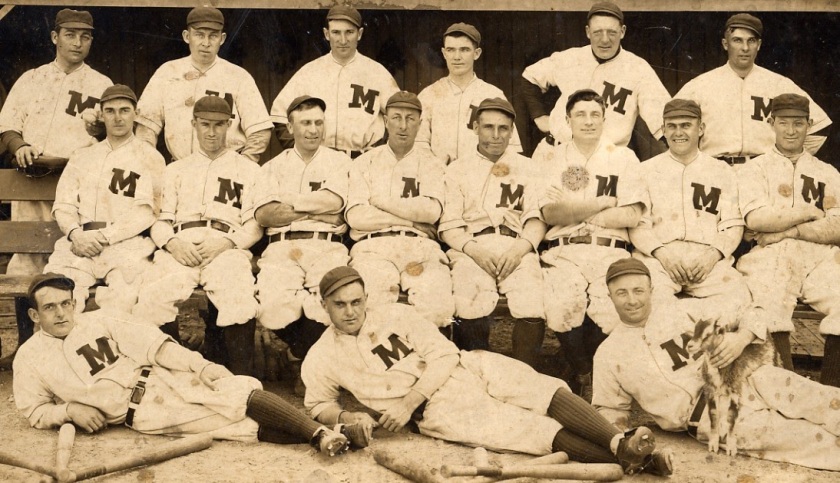