It was a hastily built and in some cases incomplete fleet that slipped into the water in the summer and autumn of 1776. In just over two months, the American shipbuilding effort produced eight 54-foot Gondolas (gunboats), and four 72-foot′ Galleys. Upon completion, each hull was rowed to Fort Ticonderoga, there to be fitted with masts, rigging, guns, and supplies. By October 1776, the American fleet numbered 16 vessels, determined to stop the British fleet heading south.

In the early days of the American Revolution, the 2nd Continental Congress looked north, to the Province of Quebec. The region was lightly defended at the time.  Congress was alarmed at the potential of a British base from which to attack and divide the colonies.

The Continental army’s expedition to Quebec ended in disaster on December 31, as General Benedict Arnold was severely injured with a bullet wound to his left leg. Major General Richard Montgomery was killed and Colonel Daniel Morgan captured, along with some 400 fellow Patriots. 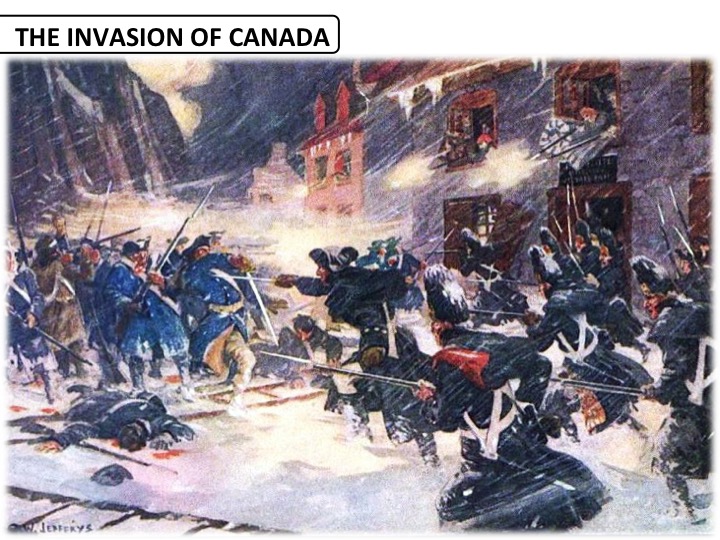 The nightmare took on a life of its own in the String of 1776, with the massive reinforcement of Quebec.   10,000 British and Hessian soldiers. By June, the remnants of the Continental army were driven south to Fort Ticonderoga and Fort Crown Point.

The continental Congress was correct about the British intention of splitting the colonies. General Sir Guy Carleton, provincial Governor of Quebec, set about doing so, almost immediately.

Retreating colonials took with them or destroyed nearly every boat along the way, capturing and arming four vessels in 1775: the Liberty, Enterprise, Royal Savage, and Revenge. Determined to take back the crucial waterway, the British set about disassembling warships along the St. Lawrence and moving them overland to Fort Saint-Jean on the uppermost navigable waters leading to Lake Champlain, the 125-mile long lake dividing upstate New York from Vermont.

There they spent the summer and early fall of 1776, literally building a fleet of warships along the upper reaches of the lake. 120 miles to the south, colonials were doing the same.

The Americans possessed a small fleet of shallow draft bateaux used for lake transport, but needed something larger and heavier to sustain naval combat.

In 1759, British Army Captain Philip Skene founded a settlement on the New York side of Lake Champlain, built around saw mills, grist mills, and an iron foundry.  Today, the former village of Skenesborough is known as “Whitehall”, considered by many to be the birthplace of the United States Navy.  In 1776, Major General Horatio Gates put the American ship building operation into motion on the banks of Skenesborough Harbor.

Hermanus Schuyler oversaw the effort, while military engineer Jeduthan Baldwin was in charge of outfitting. Gates asked General Benedict Arnold, an experienced ship’s captain, to spearhead the effort, explaining “I am intirely uninform’d as to Marine Affairs”.

200 carpenters and shipwrights were recruited to the wilderness of upstate New York. So inhospitable was this duty that workmen were paid more than anyone else in the Navy, with the sole exception of Commodore Esek Hopkins. Meanwhile, foraging parties scoured the countryside looking for guns.  There was going to be a fight on Lake Champlain.

It is not widely known, that the American Revolution was fought in the midst of a smallpox pandemic. General George Washington was an early proponent of vaccination, an untold benefit to the American war effort. Notwithstanding, a fever broke out among the shipbuilders of Skenesborough, which almost brought their work to a halt.

It was a hastily built and in some cases incomplete fleet that slipped into the water in the summer and autumn of 1776. In just over two months, the American shipbuilding effort produced eight 54-foot Gondolas (gunboats), and four 72-foot′ Galleys. Upon completion, each hull was rowed to Fort Ticonderoga, there to be fitted with masts, rigging, guns, and supplies. By October 1776, the American fleet numbered 16 vessels, determined to stop the British fleet heading south.

As the two sides closed in the early days of October, General Arnold knew he was at a disadvantage. The element of surprise was going to be critical. Arnold chose a small strait to the west of Valcour Island, where he was hidden from the main part of the lake. There he drew his small fleet into a crescent formation, and waited.

Sailing south on the 11th under favorable winds, some of the British ships had already passed the American position behind Valcour island, before realizing they were there. Some of the British warships were able to turn and give battle, but the largest ones were unable to turn into the wind.

Fighting continued for several hours until dark.  Both sides did some damage. On the American side, Royal Savage ran aground and burned. The gondola Philadelphia was sunk. On the British side, one gunboat blew up. The two sides lost about 60 men, each. In the end, the larger ships and more experienced seamanship of the English, made it an uneven fight.

Only a third of the British fleet was engaged that day, but the battle went badly for the Patriot side. That night, the battered remnants of the American fleet slipped through a gap in the lines, limping down the lake on muffled oars. British commanders were surprised to find them gone the next morning, and gave chase.

One vessel after another was overtaken and destroyed on the 12th, or else, too damaged to go on, abandoned. The cutter Lee was run aground by its crew, who then escaped through the woods. Four of sixteen American vessels escaped north to Ticonderoga, only to be captured or destroyed by British forces, the following year. 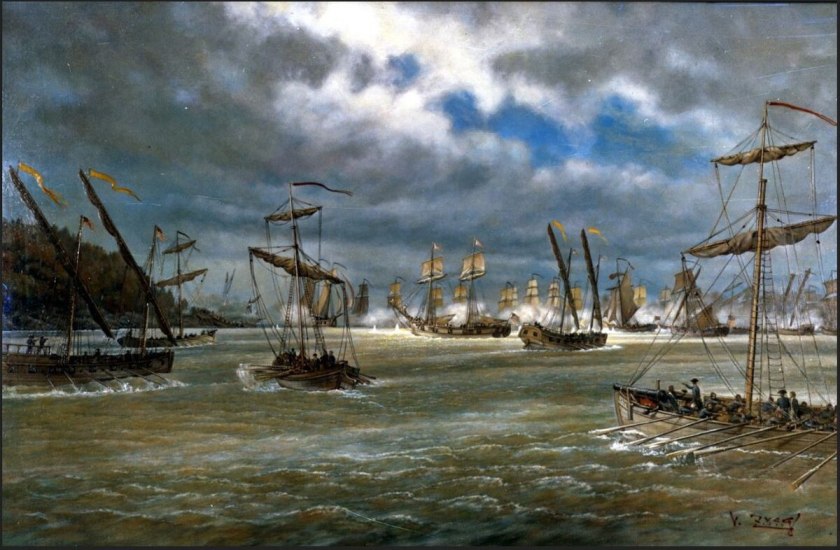 On the third day, the last four gunboats and Benedict Arnold’s flagship Congress were run aground in Ferris Bay on the Vermont side, following a 2½-hour running gun battle. Today, the small harbor is called Arnold’s Bay.

200 escaped to shore, the last of whom was Benedict Arnold himself, personally torching his own flagship before leaving her for the last time, flag still flying.

British forces would retain control of Lake Champlain, through the end of the war.
The American fleet never had a chance and everyone knew it. Yet it had been able to inflict enough damage at a point late enough in the year, that Carlton’s fleet was left with no choice but to return north for the winter.

One day, Benedict Arnold would enter history as turncoat.  A traitor to his country.  For now, the General had bought his infant nation, another year in which to fight.

221 years later, maritime surveyors from the Survey Team of the Lake Champlain Maritime Museum located the last vessel left unaccounted for, from the October 11, 1776 Battle of Valcour Island.  With mast yet standing and her bow gun at the ready, the wreck lies upright at a depth inaccessible to recreational divers, protected and preserved by the cold, dark, fresh waters of Lake Champlain.

Over the next two years, careful examination of source documents eliminated one patriot gunboat after another from consideration as the identity of the “missing gunboat”. In the end, the Pristine wreck was identified as the Spitfire, sister ship to Benedict Arnold’s seven other 54-foot gunboats constructed over the Summer of 1776, in the wilderness of Skenesborough.

Today, the Spitfire site is protected by the Sunken Military Craft Act, providing that “No person may possess, disturb, remove, or injure” any part of this precious underwater shrine, to our shared American history. 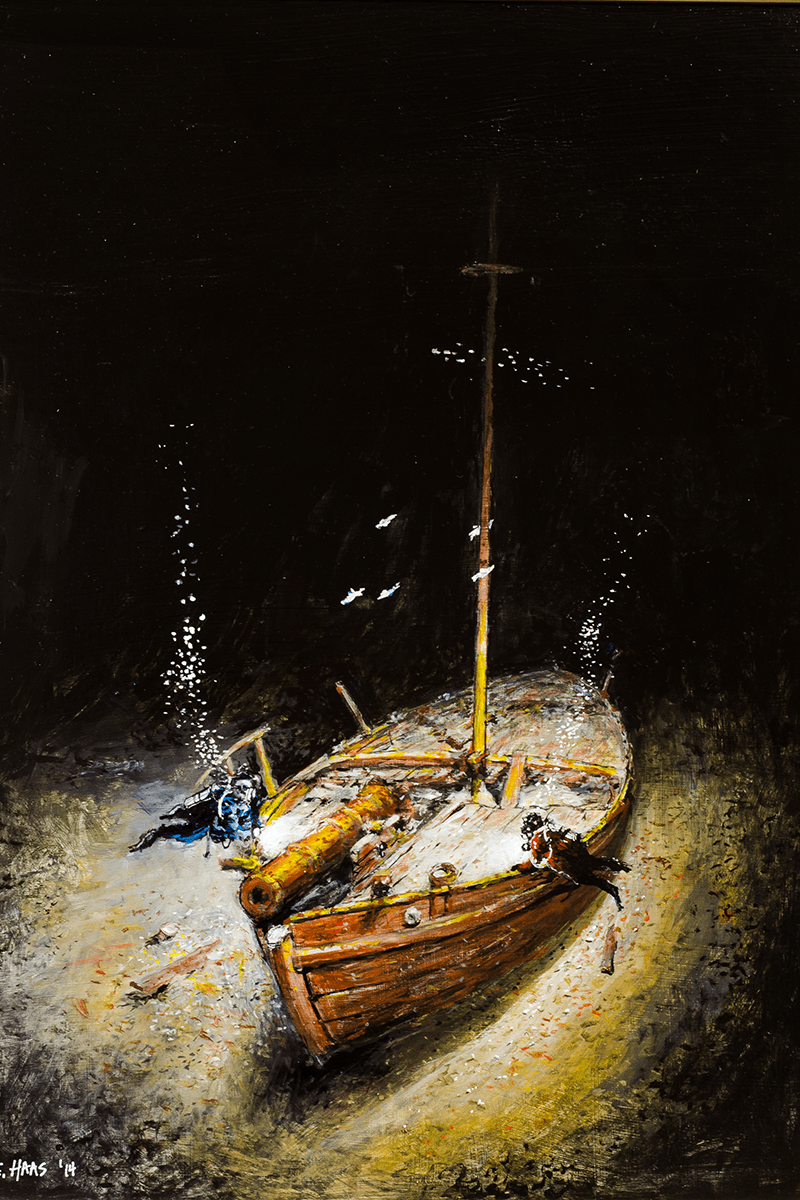 Painting of the Spitfire by Ernie Haas.  Hat tip https://www.lcmm.org/explore/shipwrecks/revolutionary-war-gunboat-spitfire/