“We’re not doing that.  We’re all turning out”. 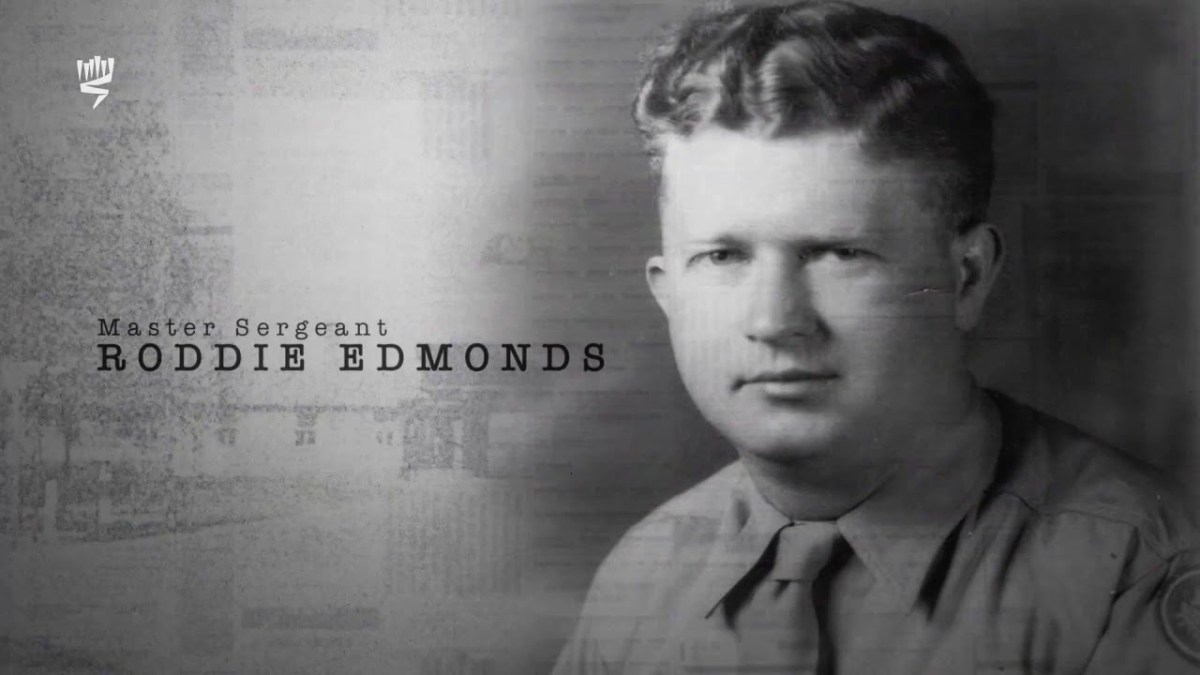 Before the age of the internet meme,  office jokes and bits of folk wisdom were passed around and copied and copied again.  There was one, “The Last great of Defiance“, which will live for all time as my favorite.  The picture speaks for itself.  I had one on the wall, for years.

This is one of those stories.

The last great effort of German arms burst out of the frozen Ardennes forest on December 16, 1944, aiming for the vital port at Antwerp.

“Unternehmen Wacht am Rhein“, (“Operation Watch on the Rhine”) was a tactical surprise for the Wehrmacht, as allied forces were driven back through the densely forested regions of France, Belgium and Luxembourg. Wartime news maps showed a great inward “bulge” in the lines, and the name stuck. The Battle of the Bulge was the largest and bloodiest battle fought by American forces in World War 2, fought in the harshest winter conditions in recorded history and involving some 610,000 GIs.

Prisoners were swept up by the thousands, and faced an uncertain future.  In Malmedy, Belgium, seventy-five captured Americans were marched into an open field and machine gunned by members of the 1st SS Panzer Division (Leibstandarte Adolf Hitler), a part of 6th Panzer Army.

On December 16, the all-black 333rd Field Artillery Battalion of the racially segregated US Army put up an heroic defense outside the town of Wereth, Belgium, using their 155mm guns to delay the German advance. Desperately outnumbered, the 333rd was overrun the following day, groups of men scattering to escape as best they could. Eleven soldiers made their way to the home of Mathias Langer, the Mayor of Wereth.

To shelter allied troops under German occupation was to risk summary execution. Despite the obvious risk to their own lives, Matthias and his wife Maria took these men in and attempted to hide them, in their home. When German troops arrived, the eleven surrendered rather than risk the lives of their benefactors.

The prisoners were marched out of sight and murdered, every one of them. The Wereth 11 were lost in the confusion of the Bulge, their bodies hidden under the snow until Spring melt. Their story was lost to history, for the next fifty years.

Nazi atrocities were not limited to Allied troops.  By some accounts, more civilians were killed during the Battle of the Bulge than the last four years.  When the fighting was over, more than 115 bodies were found in the towns of Ster and Parfondruy, alone.

For Master Sargent Roderick “Roddie” Edmonds, the war ended on December 19, swept up with hundreds of American troops and taken prisoner.  These were the lucky ones, escaping those first white-hot moments of capture to be sent to a German prisoner-of-war camp.  He was later transferred to another camp near Ziegenhain, Germany.  At 24, M/Sgt Roddie Edmonds was the senior non-commissioned officer at Stalag IX-A, responsible for 1,275 American POWs.

The Wehrmacht had harsh anti-Jew policies and kept Jewish POWs in strict segregation.  In the East, Russian Jewish POWs were sent directly to extermination camps.  The future was more uncertain for Jewish POWs, in the west.  Many were worked to death in slave labor camps.

On January 27, the first day at Stalag IX-A, commandant Siegmann ordered Edmonds: All American Jews were to identify themselves, at the following day’s assembly.  The word went out to all five barracks:  “We’re not doing that.  We’re all turning out“.

The following morning, 1,275 POWs presented themselves.  Every. Single. Man.

Siegmann was perplexed.  “They can’t all be Jews!”  As senior NCO, Edmonds spoke for the group.  “We’re all Jews here“.  The Nazi commandant was apoplectic, pressing a Luger into Edmonds’ forehead.  This is your last chance.

Edmonds gave his name, rank and serial number, and then said:  ‘If you are going to shoot, you are going to have to shoot all of us because we know who you are and you’ll be tried for war crimes when we win this war.'”  Siegmann was incandescent, white with rage, but the moment had passed.  He was beaten.

Roddie Edmonds was again recruited for the war in Korea.  He never told his family about any of it.

Chris Edmonds is the Pastor at Piney Grove Baptist Church in Maryville, Tennessee. Following his father’s death in 1985, Chris’ mother gave him his father’s  war diary, where he found a brief mention of this story.  Chris scoured the news for more information, around the time Richard Nixon was looking for his post-Presidential home.  As it happened, Nixon bought his posh, upper-east side home from Lester Tanner, a prominent New York Lawyer who mentioned in passing, he owed his life to Roddie Edmonds.

So it was, this story came to light.  In 2015, Edmonds was honored as “Righteous among the Nations”, the first American soldier, so honored.  It’s the highest honor bestowed by the state of Israel, on non-Jews who risked their lives to save Jews from the Nazi death machine.  President Barack Obama recognized Edmonds heroism in a 2016 speech before the Israeli embassy.  The United States Congress bestowed the Congressional Gold Medal in 2017.  As I write this, Pastor Edmonds and the Jewish veterans saved by M/Sgt Edmonds are pushing for the Knoxville, Tennessee native to receive the Medal of Honor.

Pastor Edmonds says he always looked up to his father, the man had always been, his hero.  “I just didn’t know he had a cape in his closet“.