Only once in recorded history did Niagara Falls run dry.  On this day in 1848, roughly 212,000 cubic feet per second dried, to a trickle. 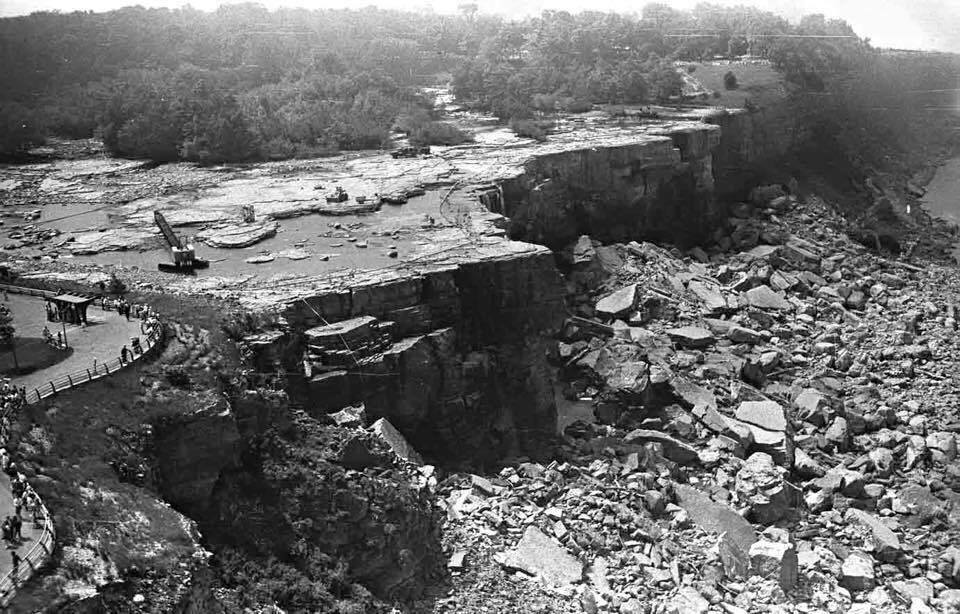 As Athens and Sparta vied for control of the Peloponnese, the earliest tribes settled in the Niagara valley of modern-day Ontario and western New York.  These aboriginal settlers were the Onguiaahra, a farming people growing corn, beans and squash in the rich soil of the Niagara escarpment, hunting deer and elk and fishing the tributary waterways of the Niagara valley.

They were 12,000 in number when French explorer Samuel de Champlain came to the region in 1615.  French explorers called them “Neutrals”, the peace makers between the perpetually warring tribes of the Seneca, Cayuga, Onondaga, Oneida and Mohawk Nations to the south, and the Huron to the north.  Vying for control of the rich French fur trade, peoples of this “Iroquois Confederacy” systematically destroyed the villages of the neutrals, killing their people or driving them east, toward Albany.  The Onguiaahra ceased to exist as a people by 1653 but their name lives on, in a word translating as “Thunder of Waters”.

Niagara Falls are three in number, 3,160 tons of water cascading over the precipice every second, hitting the bottom at American and Bridal Veil Falls with 280 tons of force, and an astonishing 2,509 striking the Canadian side, at the famous Horseshoe Falls.

Pictures have been around since the age of photography, purporting to show Niagara Falls “frozen solid”.  That’s not so unusual.  The Washington Post reports:

“Niagara Falls gets cold every year. The average temperature in Niagara Falls in January is between 16 and 32 degrees. Naturally, it being that cold, ice floes and giant icicles form on the falls, and in the Niagara River above and below the falls, every year. The ice at the base of the falls, called the ice bridge, sometimes gets so thick that people used to build concession stands and walk to Canada on it. It’s nothing out of the ordinary. It is not, to put it bluntly, big polar vortex news”. 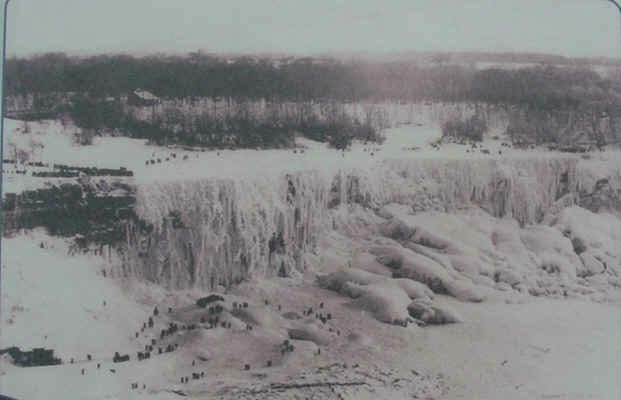 Despite appearances, water flows in abundance under those bridges of ice.  Only once in recorded history did Niagara Falls run dry.  On this day in 1848, roughly 212,000 cubic feet per second dried, to a trickle.  Not dried, really, nor did it freeze.  Strong southwest winds had driven massive amounts of ice to the head of Niagara River, effectively putting a cork in the bottle.

Fish flopped in the dry riverbed as, upstream, factories ground to a halt.  Souvenir hunters and daredevils walked out on the dry river bed.  Some even drove buggies.   One unit of the United States Army cavalry paraded back and forth, across the river.  Treasure hunters found artifacts from the War of 1812:  muskets, bayonets, even tomahawks.  At the base of the Falls, Maid of the Mist owners took the opportunity to dynamite rocks, which had endangered their boat.

That much water is not to be denied.  The ice dam broke on March 31 and, by that evening, the flow was back to normal.

The Falls “dried up” once more in 1961 but, this time, on purpose.  Over three days and 1,264 truckloads of fill, the US Army Corps of Engineers built a cofferdam that June, diverting water to the Canadian side.  There was concern that rock falls were going to cause erosion, “shutting down” the Falls.  On inspection, engineers determined that removing the rocks would accelerate erosion.  The idea was abandoned by November and the cofferdam, blown up.  To this day, the waters of Niagara flow unvexed, to the sea. 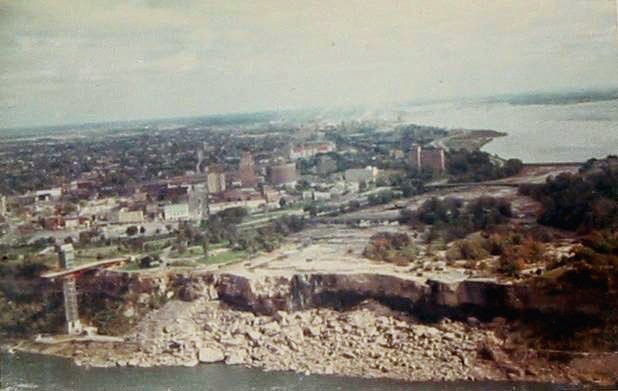 In 1901, Schoolteacher Annie Edson Taylor became the first person to go over Niagara Falls, in a barrel.  Sixteen others have followed, at least on purpose.  Five of them died, including the guy who went over in a kayak, and the one on the jet ski.  On Saturday, July 9, 1960, seven-year-old Roger Woodward was accidentally swept over Horsehoe Falls and miraculously survived the 162-foot plunge, wearing only a bathing suit and a life jacket. Sadly, James Honeycutt was killed, attempting his rescue.  90% of fish who go over the Falls, live to tell the tale.