The British government presented a large partner’s desk to President Rutherford B. Hayes in 1880, a token of gratitude for the return of HMS Resolute, 24 years earlier. Excepting a brief period following the assassination of President John F. Kennedy, the desk has been in the oval office or a private study in the White House, from that day to this.

Since the time of Columbus, European explorers searched for a navigable shortcut by open water, from Europe to Asia.   The “Corps of Discovery“, better known as the Lewis and Clark expedition, departed the Indiana Territory in 1804 with, among other purposes, and intention of finding a water route to the Pacific.

The two ships became icebound in Victoria Strait near King William Island, in the Canadian Arctic. 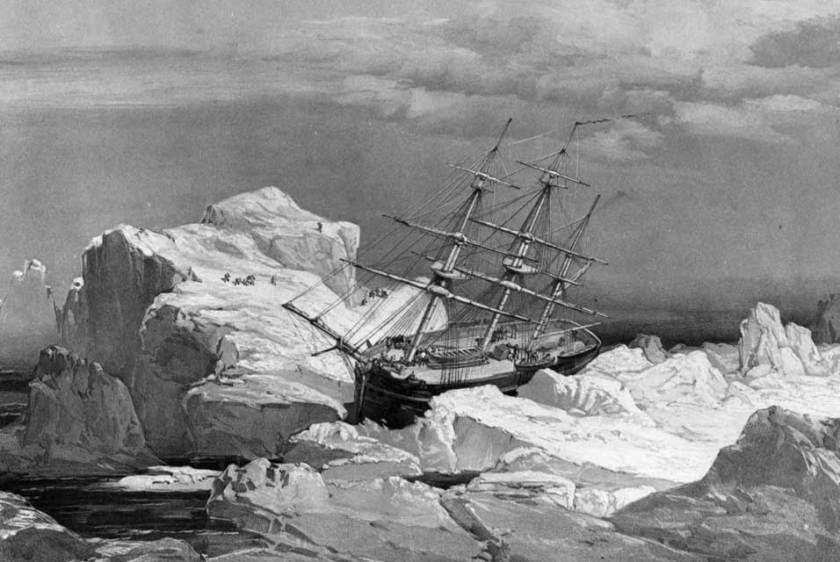 Prodded by Lady Jane Franklin, the hunt for her husband’s expedition would continue for years, at one time involving as any as eleven British and two American ships.  Clues were found including notes and isolated graves, telling the story of a long and fruitless effort to stay alive in a hostile climate.  The wreck of HMS Erebus would not be discovered until 2014, her sister ship, two years later.

HMS Resolute was a Barque rigged merchant ship, purchased in 1850 as the Ptarmigan, and refitted for Arctic exploration. Re-named Resolute, the vessel became part of a five ship squadron leaving England in April 1852, sailing into the Canadian arctic in search of the doomed Franklin expedition.

Neither Franklin nor any of his 128 officers and men would ever return alive.  HMS Resolute found and rescued the long suffering crew of the HMS Investigator, hopelessly encased in ice where, three years earlier, she too had been searching for the lost expedition.

Three of the HMS Resolute expedition’s ships themselves became trapped in floe ice in August 1853, including Resolute, herself. There was no choice but to abandon ship, striking out across the ice pack in search of their supply ships. Most of them made it, despite egregious hardship, straggling into Beechey Island in the Canadian Arctic Archipelago, between May and August of the following year.

The expedition’s survivors left Beechey Island on August 29, 1854, never to return.
Meanwhile Resolute, alone and abandoned among the ice floes, continued to drift eastward at a rate of 1½ nautical miles per day.

The American whale ship George Henry discovered the drifting Resolute on September 10, 1855, 1,200 miles from her last known position. Captain James Buddington split his crew, half of them now manning the abandoned ship. Fourteen of them sailed Resolute back to their base in Groton CT, arriving on Christmas eve. 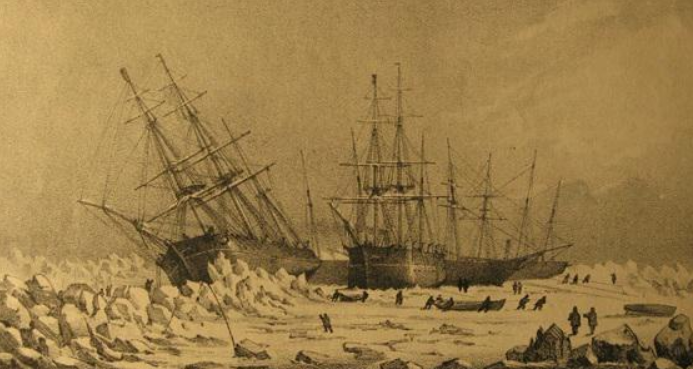 The so-called ‘Pig and Potato War” of 1859 was resolved between the British and American governments with the loss of no more than a single hog, yet a number of border disputes made the late 1850s a difficult time, for American-British relations. Senator James Mason of Virginia presented a bill in Congress to fix up the Resolute, giving her back to her Majesty Queen Victoria’s government as a token of friendship between the two nations.

$40,000 were spent on the refit, and Resolute sailed for England later that year. Commander Henry J. Hartstene presented her to Queen Victoria on December 13. HMS Resolute served in the British navy until being retired and broken up in 1879. The British government ordered two desks to be fashioned from English oak of the ship’s timbers, the work being done by the skilled cabinet makers of the Chatham dockyards. The British government presented a large partner’s desk to President Rutherford B. Hayes in 1880. A token of gratitude for HMS Resolute’s return, 24 years earlier. 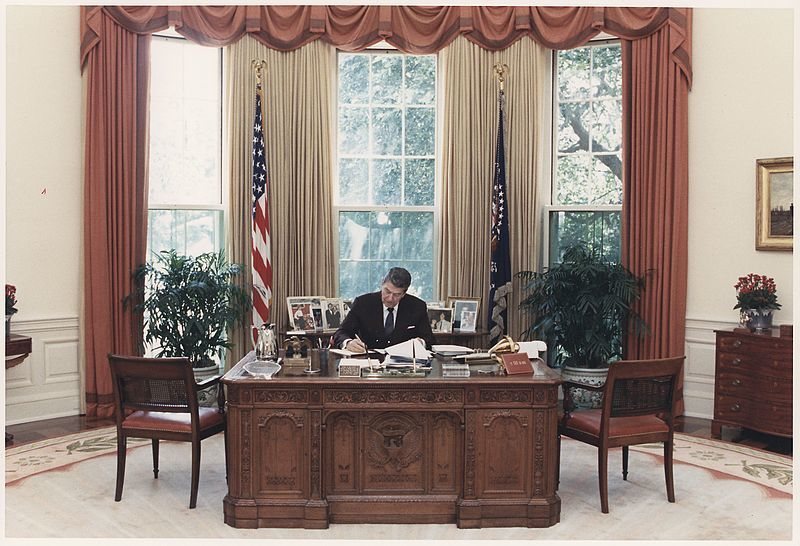 The desk, known as the Resolute Desk, has been used by nearly every American President since, whether in a private study or the oval office.

FDR had a panel installed in the opening, since he was self conscious about his leg braces. It was Jackie Kennedy who brought the desk into the Oval Office. There are pictures of JFK working at the desk, while his young son JFK, Jr., played under it.
Presidents Johnson, Nixon and Ford were the only ones not to use the Resolute desk, as LBJ allowed it to leave the White House, after the Kennedy assassination.

The Resolute Desk spent several years in the Kennedy Library and later the Smithsonian Institute, the only time the desk has been out of the White House.