Henry Ford had a “thing”, for soybeans.  At the 1934 World’s Fair in Chicago, Ford invited reporters to a feast where he served soybean cheese, soybean crackers, soy bread and butter, soy milk, soy ice cream… The man was a veritable Bubba Gump, of soybeans.

The largest museum in the United States is located in the Detroit suburb of Dearborn, the Henry Ford Museum of American Innovation. The sprawling, 12-acre indoor-outdoor complex in the old Greenfield Village is home to JFK’s Presidential limo, the Rosa Parks bus and the Wright Brothers’ bicycle shop. There you will find Abraham Lincoln’s chair from Ford’s Theater, along with Thomas Edison’s laboratory and an Oscar Mayer Wienermobile. George Washington’s camp bed is there, with Igor Sikorski’s helicopter and an enormous collection of antique automobiles, locomotives and aircraft.

Sadly, one object you will not find there, is Henry Ford’s plastic car, made from soybeans.

Ford left the family farm outside of modern-day Detroit as a young man, never to return. His father William thought the boy would one day own the place but young Henry couldn’t stand farm work. He later wrote, “I never had any particular love for the farm—it was the mother on the farm I loved”.

Henry Ford went on to other things, but part of him never left the farm. In 1941, the now-wealthy business magnate wanted to combine industry, with agriculture.  At least, that’s what the museum says.

Ford first gave the plastic car project to yacht designer Eugene Turenne Gregorie, but later turned to the Greenfield Village soybean laboratory. To the guy in charge over there, actually, a guy with some experience in tool & die making.  His name was Lowell Overly.

The soybean car, introduced to the public this day in 1941, was made from fourteen ¼-inch thick plastic panels and plexiglass windows, attached to a tubular steel frame and weighing in at 1,900 pounds, about a third lighter than comparable automobiles of the era. The finished prototype was exhibited later that year at the Dearborn Days festival, and the Michigan State Fair Grounds.

The thing was built to run on fuel derived from industrial hemp, a related strain of the Cannibis Sativa plant beloved of stoners the world over and known simply, as “weed”. 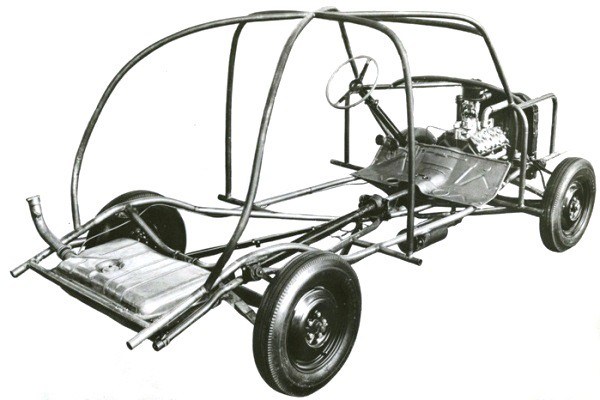 Ford claimed he’d be able to “grow automobiles from the soil”, a hedge against the metal rationing of world War Two. He dedicated 120,000 acres of soybeans to experimentation, but to no end.  The total acreage devoted to “fuel” production, is unrecorded.

Another reason for a car made from soybeans, was to help American farmers.  Plus, Henry Ford seems to have had a “thing”, for soybeans.  At the 1934 World’s Fair in Chicago, Ford invited reporters to a feast where he served soybean cheese, soybean crackers, soy bread and butter, soy milk, soy ice cream… The man was a veritable Bubba Gump, of soybeans.  Ford was probably one of the first in this country, to regularly drink soy milk.

Henry Ford’s own car was fitted with a soybean trunk and struck with an axe to show the material’s durability, though the axe was later revealed to have a rubber boot. 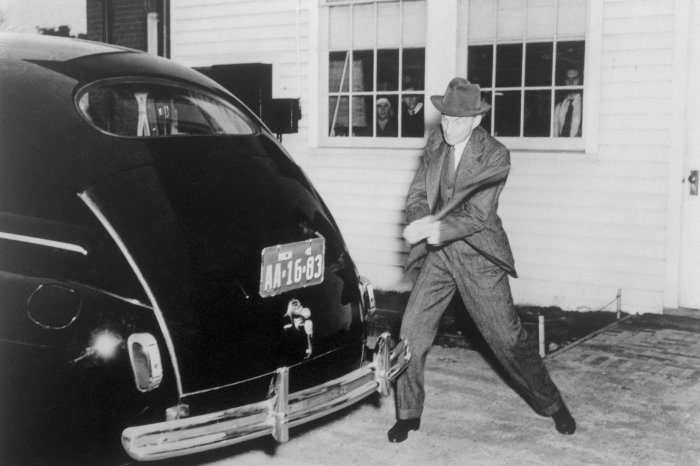 Henry Ford’s experiment in making cars from soybeans never got past that first prototype, and came to a halt during WW2.  The project was never revived, though several states adopted license plates stamped out of soybeans, a solution farm animals found to be quite delicious.

The car itself was destroyed long ago, the ingredients for its manufacture unrecorded, but the thing lives on in the hearts of hemp enthusiasts, everywhere.

The New York Times claimed the car body and fenders were made from soy beans, wheat and corn.  Some sources opine that the car was made from Bakelite or some variant of Duroplast, a plant-based auto body substance produced in the millions, for the East German Trabant.

One newspaper claimed that nothing ever came from Henry Ford’s soybean experiments, except whipped cream.