USS Kearsarge steamed further to sea as the Confederate vessel approached.  There would be no one returning to port until the issue was decided.

Hull #290 was launched from the John Laird & Sons shipyard in Birkenhead, Cheshire, England as the screw sloop HMS Enrica on May 15, 1862. She sailed in secret to the Terceira Island in the Azores, where she was met by Raphael Semmes, her new captain. Three days, 8 cannon and 350 tons of coal later, the Enrica was transformed into the 220′, 1,500-ton sloop of war and Confederate States of America commerce raider, CSS Alabama.

Alabama’s mission was to wage economic war on the Union, attacking commercial shipping from the Pacific to the Indian Ocean, from Newfoundland to Brazil. In her two-year career as commerce raider, Alabama claimed 65 prizes valued at nearly $123 million in today’s dollars.  She was the most successful, and most notorious, commerce raider of the Civil War.

Alabama was in sore need of a refit when she put into Cherbourg France, on the 11th of June, 1864. The Mohican-class Union steam sloop-of-war USS Kearsarge, then on patrol near Gibralter, hurried to Cherbourg, arriving on the 14th.

Seeing himself blockaded, Alabama’s Captain challenged Kearsarge Captain John Winslow to a ship-to-ship duel, saying “my intention is to fight the Kearsarge as soon as I can make the necessary arrangements. I hope these will not detain me more than until to-morrow or the morrow morning at farthest. I beg she will not depart until I am ready to go out. I have the honor to be your obedient servant, R. Semmes, Captain“.  That suited Winslow just fine, who took up station in international waters, and waited for Alabama to come out. 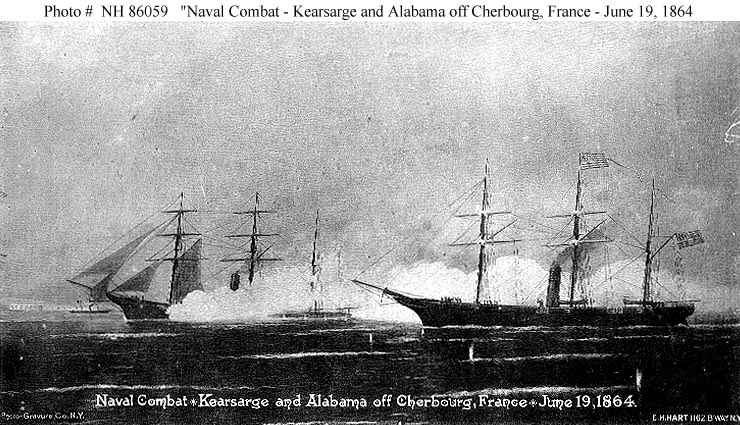 CSS Alabama steamed out of Cherbourg harbor on the morning of June 19, 1864, escorted by the French ironclad Couronne, which remained nearby to ensure that the combat remained in international waters. Kearsarge steamed further to sea as the Confederate vessel approached.  There would be no one returning to port until the issue was decided.

Captain Winslow put his ship around and headed for his adversary at 10:50am. Alabama fired first from a distance of a mile, and continued to fire as the range decreased.

The engagement followed a circular course at a range of a half mile; the ships steaming in opposite directions and firing at will.  One ball from Alabama lodged in Kearsarge’s sternpost, but failed to explode.  Within an hour, Kearsarge’s 11″ Dahlgren smooth bore pivot cannons reduced the most successful commerce raider in history to a sinking wreck. Alabama turned and tried to run back to port, but Kearsarge headed her off as rising water stopped her engines.

Semmes struck his colors and sent a boat to Kearsarge with a message of surrender and an appeal for help.

For those rescued by Kearsarge, the Civil War was over. These would spend the rest of the war as prisoners of the Federal government.  Captain Semmes escaped along with 41 others, being plucked from the water and taken to neutral ports by the British steam yacht Deerhound, and the private sail yacht Hornet.