As the ship upended and went down by the bow, survivors floating nearby could see the four chaplains.  With arms linked and leaning against the slanting deck, their voices offered prayers and sang hymns for the dead and for those about to die.

The Troop Transport USAT Dorchester sailed out of New York Harbor on January 23, 1943, carrying 904 service members, merchant seamen and civilian workers.  They were headed for the  the Army Command Base at Narsarsuaq in southern Greenland, part of a six-ship convoy designated SG-19, together with two merchant ships and escorted by the Coast Guard Cutters Comanche, Escanaba and Tampa.

Built as a coastal liner in 1926, Dorchester was anything but graceful, bouncing and shuddering her way through the rough seas of the North Atlantic.

German U-Boats had already sunk several ships in these waters.  One of the Cutters detected a submarine late on February 2, flashing the light signal “we’re being followed”.  Dorchester Captain Hans Danielson ordered his ship on high alert that night.  Men were ordered to sleep in their clothes with their life jackets on, but many disregarded the order.  It was too hot down there in the holds, and those life jackets were anything but comfortable.

Some of those off-duty tried to sleep that night, while others played cards or threw dice, well into the night.  Nerves were understandably on edge, especially among new recruits, as four Army chaplains passed among them with words of encouragement.

At 12:55am on February 3rd, the German submarine U-223 fired a spread of three torpedoes.  One struck Dorchester amidships, deep below the water line.  A hundred or more were killed in the blast, or in the clouds of steam and ammonia vapor billowing from ruptured boilers.  Suddenly pitched into darkness, untold numbers were trapped below decks.  With boiler power lost, there was no longer enough steam to blow the full 6 whistle signal to abandon ship, while loss of power prevented a radio distress signal.  For reasons not entirely clear, there never were any signal flares.

Those who could escape scrambled onto the deck, injured, disoriented, many still in their underwear as they emerged into the cold and darkness.

The four chaplains must have been a welcome sight, guiding the disoriented and the wounded, offering prayers and words of courage.  They opened a storage locker and handed out life preservers, until there were no more.  “Padre,” said one young soldier, “I’ve lost my life jacket and I can’t swim!”  Witnesses differ as to which of the four it was who gave this man his life jacket, but they all followed suit.  One survivor, John Ladd, said “It was the finest thing I have seen or hope to see this side of heaven.” Rabbi Goode gave his gloves to Petty Officer John Mahoney, saying “Never mind.  I have two pairs”.  It was only later that Mahoney realized, Rabbi Goode intended to stay with the ship.

Dorchester was listing hard to starboard and taking on water fast, with only 20 minutes to live.  Port side lifeboats were inoperable due to the ship’s angle.  Men jumped across the void into those on the starboard side, overcrowding them to the point of capsize.  Only two of fourteen lifeboats launched successfully.

Private William Bednar found himself floating in 34° water, surrounded by dead bodies and debris. “I could hear men crying, pleading, praying,” he recalled. “I could also hear the chaplains preaching courage. Their voices were the only thing that kept me going.”

As the ship upended and went down by the bow, survivors floating nearby could see the four chaplains.  With arms linked and leaning against the slanting deck, their voices offered prayers and sang hymns for the dead and for those about to die. 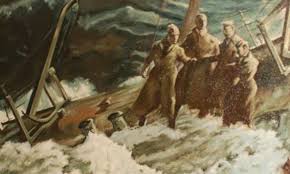 Rushing back to the scene, coast guard cutters found themselves in a sea of bobbing red lights, the water-activated emergency strobe lights of individual life jackets.  Most marked the location of corpses.  Of the 904 on board, the Coast Guard plucked 230 from the water, alive.

The United States Congress attempted to confer the Medal of Honor on the four chaplains for their selfless act of courage, but strict requirements for “heroism under fire” prevented it from doing so.  Congress authorized a one time, posthumous “Chaplain’s Medal for Heroism”, awarded to the next of kin by Secretary of the Army Wilber M. Brucker at Fort Myer, Virginia on January 18, 1961.

John 15:13 says “Greater love hath no man than this, that a man lay down his life for his friends”.  Rabbi Goode did not call out for a Jew when he gave away his only hope for survival, Father Washington did not ask for a Catholic. Neither minister Fox nor Poling asked for a Protestant.  Each gave his life jacket to the nearest man.

Carl Sandburg once said that “Valor is a gift.  Those having it never know for sure whether they have it until the test comes.”  If I were ever so tested, I hope that I would prove myself half the man, as any of those four chaplains. 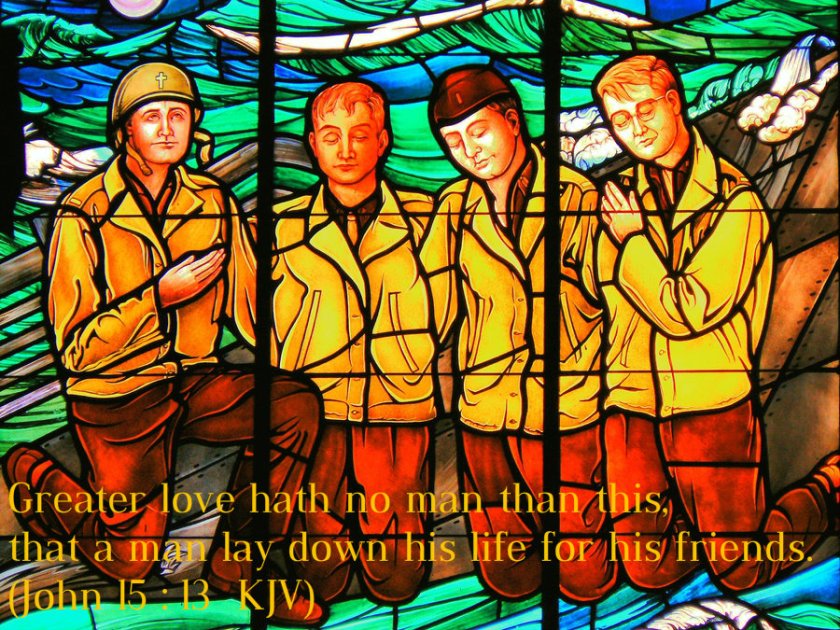