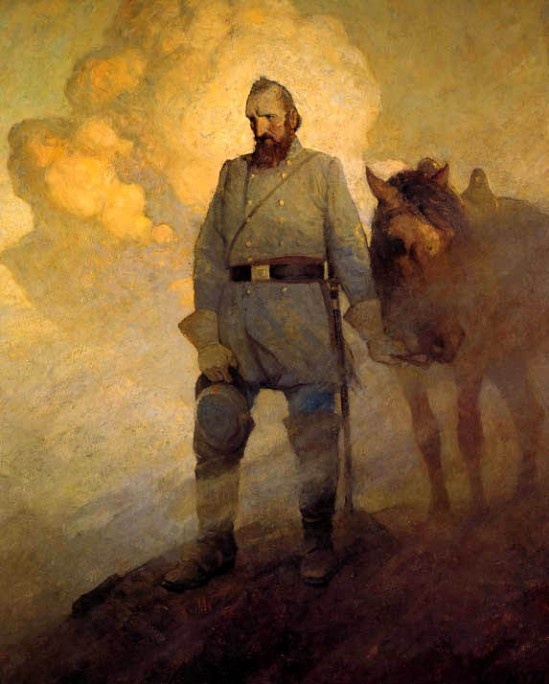 Cheers rang out in the streets of Washington DC, as General Irvin McDowell’s Army of the Potomac marched out to meet the Confederate Army of the Shenandoah, led by Brigadier General Pierre Gustave Toutant-Beauregard.  The first major battle of the Civil War was joined on July 21, in what Confederates called the Battle of 1st Manassas, and the Federals called 1st Bull Run. 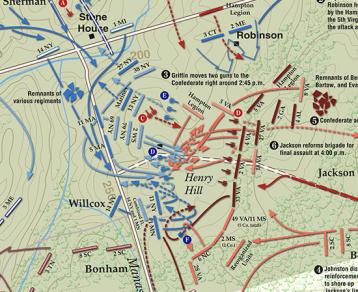 On that July morning, no one had any idea of the years-long bloodbath that lay ahead.  35,000 Federal troops, 90-day recruits all, had arrived to crush a trifling force of rebels.  Then on to Richmond, the Confederate capitol, and the end of the uprising.

The atmosphere was festive, like a football game.  The upper crust of Washington society had turned out in their carriages.  There was wine and picnic baskets, society ladies and their beaus, congressmen and their families, all arrived to watch the show.

Green and inexperienced as they were, the fighting was at times confused, and could have gone either way.  The tide of the battle turned at 4pm, with the capture of Artillery Captain James Ricketts’ guns. An hour later the Union position began to disintegrate.  Soon, a disorderly retreat turned into a rout, a blue-clad stampede back to Washington, on roads clogged with panicked civilians, attempting to flee in their carriages.

The battle could have ended differently, when Colonel William Tecumseh Sherman struck the right flank of the Confederate defenders near Henry House Hill, collapsing the Rebel line and sending it into disorderly retreat.  The Virginia Brigade of General Thomas Jonathan Jackson came up at this point, taking a defensive position on Henry House Hill.  Brigadier General Barnard Bee exhorted his troops to reform, shouting “There is Jackson standing like a stone wall. Rally behind the Virginians.”

Some will tell you that Bee’s comment was meant to be pejorative, as in “Look at Jackson standing there like a stone wall!”  We’ll never know. General Bee was shot in the abdomen and died the next day.  The legend of “Stonewall Jackson”, was here to stay.

Born in Clarksburg Virginia on January 21, 1824, the boy lost his father at age two and his mother, five years later.  Largely self-educated, the future Civil War General went to live with an uncle.  As a boy, Jackson made a deal with one of his uncle’s slaves, to teach the man to read.  It was illegal at this time, to teach blacks to read, but Jackson was as good as his word, receiving pine knots in exchange for lessons.

Thomas Jonathan Jackson was a devoutly religious man, said to fear only God.  “My religious belief teaches me” he said, “to feel as safe in battle as in bed.”

Jackson was educated at the United States Military Academy at West Point New York, graduating in 1846 and serving in the Mexican-American war.  Returning to civil life in 1851, Jackson moved to Lexington Virginia, where he worked as a professor of natural and experimental philosophy (Physics), and instructor of artillery at the Virginia Military Institute.

Though himself an owner of African slaves from a family of slave owners, Thomas Jackson was well regarded among the free and enslaved blacks of Lexington.  This may sound paradoxical to the modern reader, but the players in this story were products of their time.  Not ours.

Jackson believed that slavery existed because the Creator willed it.  His mission was to save their souls, by teaching them the Old Testament, the Ten Commandments, the Lord’s Prayer and the Apostle’s Creed.

So it was that Jackson and his wife established the Lexington Presbyterian Church Sunday School. There, contrary to state law. the pair taught African-American children to read and write, continuing to do so until Jackson went to war, in 1861.  The next time he would visit was to be buried there, in 1863.

Jackson’s military career reads like a timeline of his era.  The Great Train Raid of 1861.  Falling Waters. Bull Run (Manassas), 1st and 2nd. The Romney Expedition.  The Valley Campaign. The Seven Days’ Battles. The Northern Virginia Campaign. The Maryland Campaign, Harpers Ferry, Antietam and Fredericksburg.  And the last.  Chancellorsville.  The Virginia town where the story of Stonewall Jackson comes to an end.

Returning to camp on May 2, 1863, Jackson and his staff were mistaken in the rain and darkness for a Union cavalry force.   A nervous sentry from the 18th North Carolina shouted, “Halt, who goes there?”, and fired before things sorted out.  Frantic shouts from Jackson’s party trying to identify themselves were met by Major John Barry, who shouted, “It’s a damned Yankee trick! Fire!”  Several of Jackson’s men were killed on the spot, along with a number of horses.  Jackson himself was shot twice in the left arm, and once in the right hand.

Robert E. Lee wrote to the General, on learning of his injuries:  “Could I have directed events, I would have chosen for the good of the country to be disabled in your stead.”

There was no saving Jackson’s arm.  The limb was amputated by Dr. Hunter McGuire, the following day  Jackson was moved to the office building at the Chandler plantation in Guinea Station.  General Lee complained, “He has lost his left arm, but I have lost my right arm.”

By that time, Jackson was already developing a tightness in his chest, an early sign of pneumonia.

Before antibiotics, doctors could predict the hour of death, of pneumonia patients.  On May 10, eight days after being shot, Jackson was breathing his last.  “It is the Lord’s Day; my wish is fulfilled. I have always desired to die on Sunday.”

Dr. McGuire wrote the following account of Stonewall Jackson’s last words:  “A few moments before he died he cried out in his delirium, ‘Order A.P. Hill to prepare for action! Pass the infantry to the front rapidly! Tell Major Hawks —’ then stopped, leaving the sentence unfinished. Presently a smile of ineffable sweetness spread itself over his pale face, and he said quietly, and with an expression, as if of relief, ‘Let us cross over the river, and rest under the shade of the trees.’

In 1906, Reverend LL Downing raised money to install a memorial window in the 5th Avenue Presbyterian Church of Roanoke, dedicated to Stonewall Jackson.  And to Reverend Dowling’s own parents, who as slave children had been educated in Jackson’s Sunday school.  It may be the only “black” church in the country, with a stain-glass window dedicated to a Confederate General.

CBS Sunday Morning did an interesting segment on the church and its window, amidst the current hysteria involving Confederate monuments.  Their article and the video, are linked here.