“On you depend the fortunes of America. You are to decide the important question, on which rest the happiness and liberty of millions yet unborn. Act worthy of yourselves.” – Dr. Joseph Warren 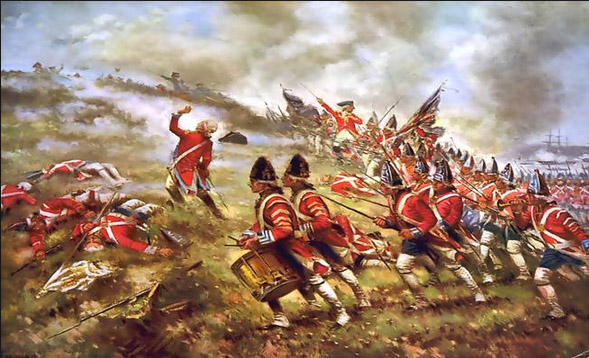 Charlestown, Massachusetts occupies a hilly peninsula to the north of Boston, at the point where the Mystic River meets the Charles. Like Boston itself, much of what is now Charlestown was once Boston Harbor.  In 1775 the town was a virtual island, joined to the mainland only by a thin “neck” of land.

Thousands of Patriot Militia poured into the area following the April battles of Lexington and Concord, hemming in the British who controlled Boston and its surrounding waterways.

Reinforced and provisioned from the sea over which the Crown held undisputed control, British forces under General Sir Thomas Gage could theoretically remained in Boston, indefinitely.

The elevation of Breed’s and Bunker’s Hill across the river, changed that calculation.  Should colonial forces obtain artillery of their own, they would be able to rain down hell on British forces bottled up in Boston.  It was just this scenario that led Henry Knox into a New England winter later that year, to retrieve the guns of Fort Ticonderoga.

The Massachusetts Provincial Congress received word on the 13th that the British planned to break out of Boston within the week, taking the high ground of Dorchester Heights to the south and Charlestown to the north. Major General Israel Putnam was directed to set up defenses on Bunker Hill, on the northwest end of the Charlestown peninsula.

Colonel William Prescott led about 1,200 men onto the peninsula on the night of the 16th. Some work was performed on the hill which gives the battle its name, but it was farmer Ephraim Breed’s land to the southeast, which offered the more defensible hill from which to defend the peninsula. 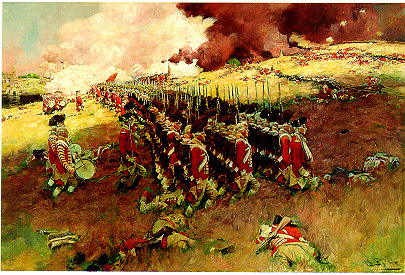 Shovels could be heard throughout the night.  The sun rose on June 17 to reveal a 130′ defensive breastwork across Breed’s hill. Major General William Howe was astonished. “The rebels,” he said, “have done more work in one night than my whole army would have done in one month.”

The warship HMS Lively opened fire on the redoubt shortly after 4am, with little effect on the earthworks. 128 guns joined in as the morning bore on, including incendiary shot which set fire to the town. Militia continued to reinforce the high ground throughout the morning hours, as Regulars commanded by General Howe and Brigadier General Robert Pigot crossed the Charles River and assembled for the assault.

The British line advanced up Breed’s Hill twice that afternoon, Patriot fire decimating their number and driving survivors back down the hill to reform and try again. Militia supplies of powder and shot began to give out as the British advanced up the hill for the third assault.

“Don’t fire until you see the whites of their eyes”. The quote is attributed to Prescott, but the order seems to have originated with General Putnam and passed along by Prescott, Seth Pomeroy, John Stark, and others, in a desperate attempt to conserve ammunition.

Finally, there was nothing left with which to oppose the British bayonets.  The Militia was forced to retreat.

Two months before the battle, Dr. Warren had spoken to his men. “On you depend the fortunes of America”, he said. “You are to decide the important question, on which rest the happiness and liberty of millions yet unborn. Act worthy of yourselves.”

Act worthy of yourselves.  That they did.

The Battle of Bunker Hill ended in victory for the British, in that they held the ground when the fighting was over. It was a Pyrrhic victory. Howe lost 226 killed and 828 wounded, over a third of their number and more than twice those of the Militia.

One Eighth of all the British officers killed in the Revolution, died on Ephraim Breed’s Hill. General Henry Clinton wrote afterward, of the battle:  “A few more such victories” he said, “would have shortly put an end to British dominion in America”.