In the 1930s, many believed that International Communism was “winning”. That the Soviet Union was deliberately starving millions of its own citizens to death during this period, seemed to trouble relatively few. 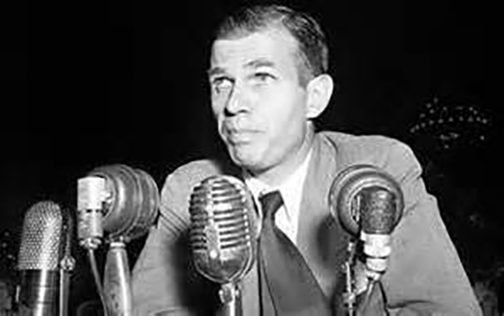 In the wake of WWI and the Bolshevik revolution in Russia, American authorities became increasingly alarmed at the rise of foreign and leftist radicalism.  Most especially the militant followers of anarchist Luigi Galleani.

This was not meaningless political posturing.  Anarchists mailed no fewer than 36 dynamite bombs to prominent political and business leaders in April 1919, alone. In June, another nine far more powerful bombs destroyed churches, police stations and businesses. Attorney General A. Mitchell Palmer had one hand delivered to his home by anarchist Carlo Valdinoci, who did something wrong and somehow managed to blow himself to bits on the AG’s doorstep.

Palmer attempted to suppress these radical organizations in 1919-20, but his searches and seizures were frequently illegal, his arrests and detentions without warrant, his deportations questionable.
Looking

over the international tableau of the time, there appeared great cause for concern.  The largest nation on the planet had just fallen to communism, in 1917.
The Red Army offensive of 1920 drove into Poland, almost as far as Warsaw. The “Peace of Riga”, signed in 1921, split off parts of Belarus and Ukraine, making them both parts of Soviet Russia. On this day in 1921, Bolshevist Russian forces occupied Tbilisi, capital of the Democratic Republic of Georgia.
In the 1930s, many believed that International Communism was “winning”. The capitalist west was plunged into a Great Depression that it couldn’t seem to control, while the carefully staged propaganda of Stalin’s Soviet Union did everything it could to portray itself as a “workers’ paradise”.
That the Soviet Union was deliberately  starving millions of its own citizens to death during this period, seemed to trouble relatively few.
Whittaker Chambers was one who saw communism as winning, and joined the Communist Party of the United States (CPUSA) in 1925. For a time he worked as a writer at the Party’s newspaper “Daily Worker”, before becoming editor of “New Masses”, the Party’s literary magazine.
Through the early to mid-thirties, Chambers delivered messages and received documents from Soviet spies in the government, photographing them himself or delivering them to Soviet intelligence agents to be photographed.
By the late 30s, Chambers’ idealism was replaced by the growing realization that he was supporting a murderous regime. By 1939, he joined the staff of Time Magazine, where he pushed a strong anti-communist line.
A series of legislative committees were formed between 1918 and the outbreak of WWII to investigate this series of threats.  It was in this context that HUAC, the House Committee on Un-American Activities was formed in 1938, becoming a “standing” (permanent) committee in 1945. 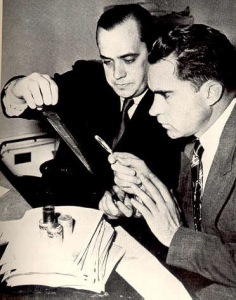 Chambers warned about communist sympathizers in the Roosevelt administration, as early as 1939.  Government priorities changed during the course of WWII.  Chambers was summoned to testify on August 3, 1945.
In his testimony, Chambers named Alger Hiss and others, as communists.  A graduate of Johns Hopkins and Harvard Law School who had clerked for Supreme Court Justice Oliver Wendell Holmes, Alger Hiss seemed an unlikely communist. He went on to practice law in Boston and New York before returning to Washington to work on President Roosevelt’s “New Deal”, winding up at the State Department as an aide to Assistant Secretary of State Francis B. Sayre, former President Woodrow Wilson’s son-in-law. 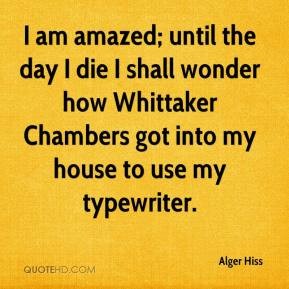 Hiss flatly denied Chambers’ charges, filing suit that December for defamation of character.  Chambers doubled down in his 1948 deposition, claiming that Hiss was not only a communist sympathizer, he was also a spy.
Before his defection, Chambers had secreted documents and microfilms, some of which he hid inside a pumpkin at his Maryland farm. The entire collection became known as the “Pumpkin Papers”, consisting of incriminating documents, written in what appeared to Hiss’ own hand, or typed on his Woodstock no. 230099 typewriter.
Hiss claimed to have given the typewriter to his maid, Claudia Catlett 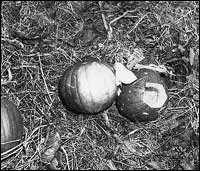 . When the idiosyncrasies of his machine were demonstrated to be consistent with the documents, he then claimed that Chambers’ team, including freshman member of Congress Richard M Nixon, must have modified the typeface on a second typewriter to mimic his own.
Hiss’ theory never explained why Chambers side needed another typewriter, if they’d had the original long enough to mimic it with the second.
Alger Hiss’ first trial for lying to a Grand Jury ended with a hung jury, 8-4.  A second trial began on November 17. He was found guilty on January 21, 1950, still proclaiming his innocence. He appealed his conviction but lost, and served 44 months in Lewisburg Federal Penitentiary before being released in 1954.
Hiss would go to his grave protesting his innocence, though Soviet era cables, decrypted through the now-declassified “Venona Project”, seem to convict him beyond a reasonable doubt of being a soviet agent. Venona transcript #1822, sent in March 1945, from the Soviets’ Washington station chief to Moscow, describes subject codenamed ALES as having attended the February 4–11, 1945 Yalta conference, before traveling to Moscow. Hiss did attend Yalta on those dates, before going to Moscow with Secretary of State Edward Stettinius. 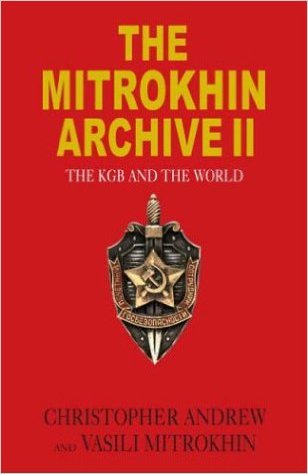 Historians John Earl Haynes and Harvey Klehr report that the Venona transcripts tied 349 Americans to Soviet intelligence, though fewer than half have ever been identified.  The Office of Strategic Services alone, precursor to the CIA, housed between fifteen and twenty Soviet spies.
In 1992, former KGB archivist Vasili Mitrokhin defected to Great Britain, taking with him 30 years of handwritten notes. The Mitrokhin Archive revealed that Soviet moles went as high as President  Roosevelt’s most trusted aid, Harry Hopkins. Equivalent to finding that, at any point during the last three administrations, Karl Rove, Valerie Jarrett or Steve Bannon was an agent for the other side.