The Soviet Union entered the Lake Placid games as heavy favorites, having built a 27-1-1 record since that 1960 upset, outscoring their opponents by a combined 175 to 44 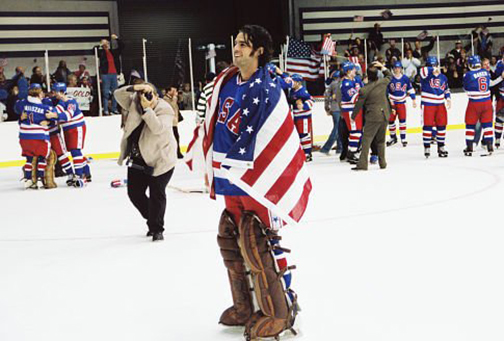 In the world of sports, there may be nothing more boring than the “dream team” sent to represent the US in the 1992 Olympics.  NBA professionals all, these guys are paid in the tens of millions to play their game.  To the surprise of precisely no one, they swept their series with an average of 44 points, against opponents like Angola, Lithuania and Croatia.  Yawn.

We didn’t always send professional athletes to the Olympics.  There was a time when athletes’ amateur status was tightly controlled.  Jim Thorpe, possibly the finest all-round athlete in American history, was stripped of his 1912 gold medals in the decathlon and pentathlon, because he had once accepted small sums to play baseball during college summers.  It could not have given him much comfort that those medals were reinstated, in 1983.  By that time, the man had been dead for thirty years.

In 1980, the US hockey team defeated Finland on February 24 to win the gold medal, at the winter Olympics in Lake Placid.  It was almost anti-climactic.  The real drama played out two days earlier, when a collection of American amateurs defeated the mighty Soviet Union.

Canadians dominated Olympic ice hockey in the early days of the event, winning six out of seven gold medals between 1920 and 1952.  Team USA scored a surprise gold at Squaw Valley in 1960, after which the Soviet Union seemed unstoppable, winning gold in 1964, ’68, ’72 &’76.

My fellow children of the cold war will attest, a favorite complaint of the era was the semi-professional status of the former Soviet bloc athletes, particularly those from East Germany and the Soviet Union itself.  Between its first appearance in the 1952 Olympic games and its final appearance in 1988, the Soviet Union was at the top of the combined medal count with 1,204.  Even now they’re second only to that of the United States, a country that’s been participating over twice as long.

The Soviet Union entered the Lake Placid games as heavy favorites, having built a 27-1-1 record since that 1960 upset, outscoring their opponents by a combined 175 to 44.  The 1980 team had world class training facilities, having played together for years in a well-developed league.  Vladislav Tretiak was widely believed to be the best goaltender in the world at that time.  He, defenseman Viacheslav Fetisov and forward Valeri Kharlamov, would all go on to be enshrined in the International Hockey Hall of Fame.

University of Minnesota coach Herb Brooks had assembled the youngest team in U.S. history to play in the Olympics, with an average age of only 21.  Left wing Buzz Schneider was the only veteran, returning from the 1976 Olympic squad.  Nine players had played under Coach Brooks.  Another four came from archrival Boston University, including goalie Jim Craig, and team captain Mike Eruzione.  For some players, the hostility of that college rivalry carried over to their Olympic teammates.

The Soviet team had demolished earlier opponents by a combined score of 50-11.  The US squad had squeaked out a series of upsets, 23-8. The day before, New York times sports reporter Dave Anderson wrote, “Unless the ice melts, or unless the United States team or another team performs a miracle, as did the American squad in 1960, the Russians are expected to easily win the Olympic gold medal for the sixth time in the last seven tournaments.”

Team USSR took an early lead of 2-1 in the first period.  Mark Johnson tied the score with one second left, leading Soviet coach Viktor Tikhonov to make the goofiest decision, ever.  He pulled the best goalie in the world, replacing him with backup goaltender Vladimir Myshkin.  The move shocked players on both teams.  Years later, Johnson and Fetisov were NHL teammates, and Johnson asked him about the decision.  “Coach Crazy”, was all he said.

Aleksandr Maltsev scored an unanswered goal on a power play, 2:18 into the second period.  At the end of the second, the Soviet Union led, 3-2.

Mark Johnson scored his second goal of the game at 8:39 in the third, in the last seconds of another power play.  For the American team, it was only the third shot on net, in the last 27 minutes. Vasili Pervukhin got in his goalie’s way with ten minutes to play, as Mike Eruzione fired one past Myshkin to put the Americans ahead, 4-3.

The Soviets attacked ferociously, but Craig let nothing past.  Altogether the Soviet team made 39 shots on goal to the Americans’ 16, but the score held.

In the final moments of the game, the crowd began to count down the seconds.  ABC Sportscaster Al Michaels calling the game in a rising crescendo:  “11 seconds, you’ve got 10 seconds, the countdown going on right now! Morrow, up to Silk. Five seconds left in the game. Do you believe in miracles!? YES!!”

In the gold medal round on the 24th, the Americans were behind at the end of the 2nd period, 2-1.  The American team was in the locker room during the second intermission, when coach Brooks said “If you lose this game, you’ll take it to your f***ing graves”.  Team USA defeated Finland for the gold medal, 4-2.

IOC President Avery Brundage (1952-1972), was adamant about preserving the amateur status of the Olympics. Once he was gone, the floodgates began to open.  Years later, sportswriter Ron Rapoport said “The pros are there for a reason… The pro athletes are pre-sold to the public, which means increased viewership.”

The “Dream Team” of 1992 crossed a line that can never be retaken, but that can’t change the finest moments in sporting history.  For those of us who follow Boston sports, that means the 2004 World Series, the last 2:17 of Superbowl LI, and the Miracle on Ice, of 1980.