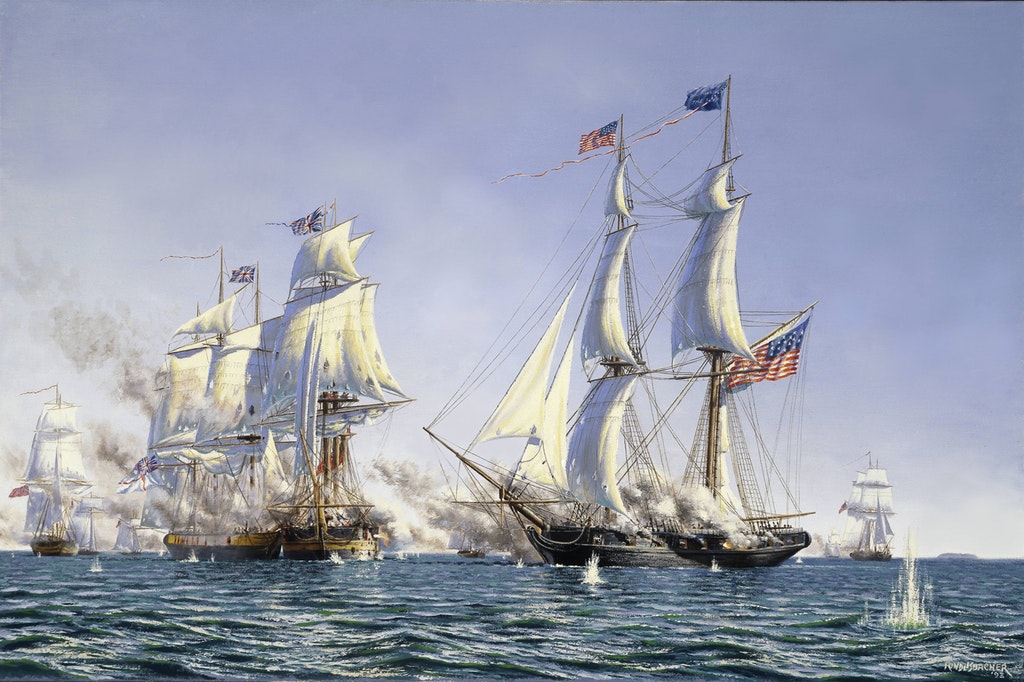 In June 1812, neither the United States nor the British Empire were prepared for war. Most of the British war machine was busy with a “Little Corporal” whose “Waterloo” lay two years into in an uncertain future.

The Fledgling United States had only just disbanded the National Bank and now had no means of paying for war, while private northeastern bankers were reluctant to provide financing.

It may have been the most unpopular war in United States’ history.  Much of New England threatened to secede, their position bolstered by the sack of Washington in August, 1814.

New England may have followed through with secession following the Hartford Convention of 1814, had not the Federalist position been made risible by future President Andrew Jackson’s overwhelming victory at the Battle of New Orleans.

Hartford Convention delegates ended with a formal report, resolutions from which would resurface decades later in a doctrine we know as nullification.

Opposition to America’s first declared war was vehement, and often bloody.  Four days after it began, the office of the Baltimore Federal Republican newspaper was burned to the ground by an angry mob, infuriated by the anti-war editorials of Alexander Contee Hanson.

Hanson reopened his paper a month later, shielded by Revolutionary War veterans James Lingan and “Lighthorse Harry Lee”, father of Civil War General Robert E. Lee. The armed protection did him little good. Another mob formed within hours, this time torturing and severely beating Hanson, Lignan and Lee, before leaving them for dead.

James Lignan died of his injuries. Hanson recovered and went on to serve in the House of Representatives. Lee survived the beating but remained partially blind from hot wax poured into his eyes by the mob.

The British Navy had virtually unchallenged control of the Great Lakes in 1812, with several warships already on station. The only American warship on Lake Erie was the brig USS Adams, pinned down in Detroit and not yet fitted for service.

Detroit fell almost immediately and remained in British hands for over a year. The Adams was captured along with the town and renamed “HMS Detroit”.

Meanwhile, Americans captured an English brig, the Caledonia, and acquired three civilian vessels, the schooners Somers and Ohio and the sloop-rigged Trippe. All four were converted into warships, which Master Commandant Oliver Hazard Perry had towed by oxen up the Niagara River. The operation which took six days. Once in Lake Erie they sailed down the coast to Presque Isle, on the Pennsylvania coast.

The American squadron was almost complete by mid-July, but there was a problem. The sand bar at the mouth of Presque Isle Bay is only 5-feet deep. This sand bar kept the British blockade at bay, with a little help from 2,000 Pennsylvania militia and several shore batteries. Once ready though, American ships had to contend with the same obstacle.

British Commander Robert Heriot Barclay was forced to lift his blockade on July 29, due to a supply shortage and bad weather. Perry immediately began the exhausting process of moving his vessels across the sandbar. Guns had to be removed, the larger boats raised between “camels”:  barges lashed together and emptied of ballast to lift the ships high in the water. When Barclay returned four days later, he found the Americans had nearly completed the task.

What followed was one of history’s great head fakes. Naval warfare in the age of sail was typically conducted by two parallel lines of ships, pounding one another with cannon until one side could no longer take the punishment. Perry’s largest brigs were unready when the British fleet returned, yet the American gunboats formed into line of battle so quickly and with such confidence, that Barclay withdrew to await completion of HMS Detroit.

Perry’s fleet established anchorage at Put-in-Bay on the Ohio coast. It was there that Barclay’s fleet came for them on September 10.

Battle lines converged outside the harbor shortly after 11:00am. Perry’s flagship USS Lawrence took a savage beating, the longer guns of HMS Detroit having 20 minutes to do their work before Lawrence could effectively reply.

HMS Queen Charlotte added her gunfire to that of Detroit. Soon the American flagship was a wreck, with 80% casualties. Perry transferred his flag and rowed to the USS Niagara half a mile away, the brig being almost unscathed in the action, up to this point.

Damaged masts and rigging on the British side resulted in collision between Detroit and Queen Charlotte. They were still snarled up as Niagara broke through the British line, pounding them with broadsides from 18 32-pounder carronades and two 12-pounder long guns. Smaller English ships attempted to flee but were quickly overtaken.

That afternoon American and English vessels, the latter now prizes of war, were anchored with hasty repairs already underway. Oliver Hazard Perry took an old envelope and scrawled his now famous message to future President William Henry Harrison. “Dear General, We have met the enemy and they are ours. Two ships, two brigs, one schooner and one sloop. Yours with great respect and esteem, O.H. Perry“.

Niagara remains in service to this day, a Coast Guard sail trainer and outdoor exhibit for the Erie Maritime Museum.  One of the last surviving ships, from the War of 1812.