The history of the Navajo code talkers of World War 2 is well known but by no means, unique.  Indigenous Americans of other nations served as code talkers during WW2 including Assiniboine, Lakota and Meskwaki soldiers serving in the Pacific, North African, and European theaters of the war. 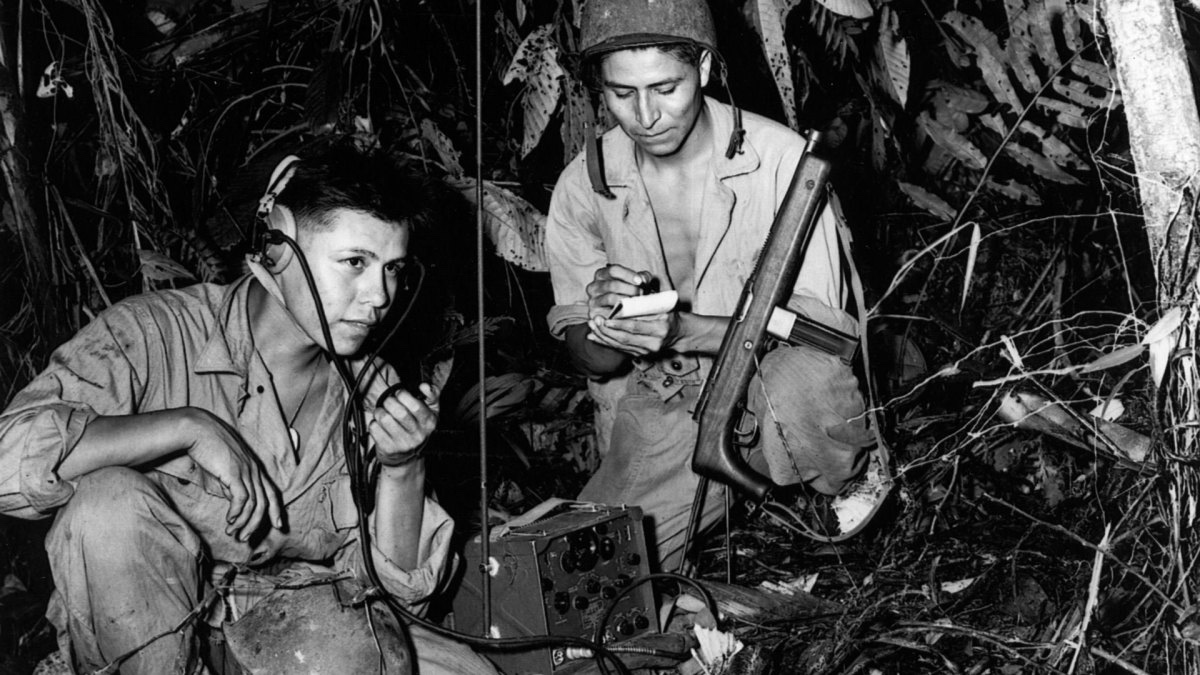 During the twentieth century, the United States and others specially recruited bilingual speakers of obscure languages, applying those skills in secret communications based on those languages.  Among these, the story of the Navajo “Code Talkers” are probably best known.   Theirs was a language with no alphabet or symbols, a language with such complex syntax and tonal qualities as to be unintelligible to the non-speaker. The military code based on such a language proved unbreakable in WWII. Japanese code breakers never got close.

The history of the Navajo code talkers of WWII is well known but by no means, unique.  Indigenous Americans of other nations served as code talkers during WW2 including Assiniboine, Lakota and Meskwaki soldiers who did service in the Pacific, North African, and European theaters of the war.

The information is contradictory, but Basque may also have been used, in areas where no native speakers were believed to be present.  Native Cree speakers served with Canadian Armed Services, though oaths of secrecy have all but blotted their contributions, from the pages of history.

The first documented use of military codes based on native American languages took place during the Second Battle of the Somme in September 1918, employing on the language skills of a number of Cherokee troops.

The first test under combat conditions took place on October 26, 1918, as two companies of the 2nd Battalion performed a “delicate” withdrawal from Chufilly to Chardeny, in the Champagne sector. One captured German officer later confirmed the Choctaw code to have been a complete success. We were “completely confused by the Indian language”, he said, “and gained no benefit whatsoever” from wiretaps.

Choctaw soldiers were embedded within multiple companies of infantry. Messages were transmitted via telephone, radio and by runner, many of whom were themselves native Americans.

The Choctaw themselves didn’t use the term “Code Talker”, that phrase wouldn’t come about, until WWII. At least one member of the group, Tobias W. Frazier, simply described what they did as, “talking on the radio”.  Of the 19 who served in WWI, 18 were native Choctaw from southeast Oklahoma. The last was a native Chickasaw. The youngest was Benjamin Franklin Colbert, Jr., the son of Benjamin Colbert Sr., one of Teddy Roosevelt’s “Rough Riders” of the Spanish American War. Born September 15, 1900 in the Durant Indian Territory, he was all of sixteen, the day he enlisted.

Unconfirmed eyewitness accounts report that 250 Germans occupied the position, and that Oklahombi killed 79 of them before their comrades decided it was wiser to surrender. Some guys are just not to be trifled with.