Every year, millions of visitors to the Rotunda of the Capitol stop to admire the work. Few possess so much as the foggiest notion that the artist, was an 18-year-old girl.

She was about 5-feet tall when her parents moved to Washington, a mere wraith of a girl of 14 summers, as yet unable to tip the scales at 90 pounds.    Her father Robert was a surveyor, come to the capital for a job in the cartography office.

Her brother Robert headed south to Arkansas, to join with Woodruff’s Battery in service to the Confederate Army.  The year was 1861.  The District of Columbia was the capital in name only, of a nation at war with itself.

The elder Robert took ill and times got tough for the Ream family.  Despite her diminutive stature, Lavinia Ellen, “Vinnie“ to friends and family, took a job to help with family finances.  She was working in the dead letter office at the post office, one of the first women ever hired by the federal government.

Missouri Congressman James Rollins introduced Vinnie to sculptor Clark Mills in 1863, the artist who produced that statue of President Andrew Jackson, the one we’ve heard so much about recently, there in Lafayette square.

The artist was amused when the young girl remarked “I can do that myself” and handed her a pail of clay with an invitation to try.  He was delighted when she returned a month later, this time with a surprisingly good likeness of an Indian Chieftain.  It wasn’t long before she became Mills’ apprentice.

Stories spread concerning the remarkable abilities of this young artist.  Vinnie’s talents blossomed and she left the post office to pursue her art, full time.  Senators and Members of Congress were her subjects.  Her faithful likeness of the glowering visage of that fierce opponent of slavery Thaddeus Stevens, the Pennsylvania Republican Congressman who would one day lead the impeachment effort against President Andrew Johnson, earned her an important and powerful ally.

It must have been an exciting time for a young girl in Washington DC, the horse-drawn ambulances, the ever-present blue-clad soldiers and more than anything, the raw-boned figure of the President of the United States, his carriage invariably accompanied by a squadron of brightly caparisoned, mounted Army officers.  Vinnie was interested in the figure of Abraham Lincoln.  The desire to sculpt the man’s likeness blossomed to an obsession as the titanic weight of office and crushing grief following the death of Lincoln’s 12-year-old son Willy, seemingly etched themselves across the President’s face.

Raised as she was on the western prairies of Wisconsin, Kansas, and Missouri, Vinnie was unacquainted with the “way things were done” in the nation’s capital.   Petite, quick with a smile and not a little ambitious, she could often get to “yes” where others hadn’t so much as a chance.

So it was in 1864, Vinnie was granted permission which would have been denied, to an older artist.  She herself explained “Lincoln had been painted and modeled before, and when friends of mine first asked him to sit for me he dismissed them wearily until he was told that I was but an ambitious girl, poor and obscure. … Had I been the greatest sculptor in the world I am sure that I would have been refused.”

Every day for five months, Vinnie Ream had a private half-hour with the President of the United States, the two speaking but infrequently as she set her hands about the work.  She was performing the final touches on the bust you see below, the morning of April 14, 1865.  General Robert. E. Lee had surrendered to General Ulysses Grant only five days earlier.  The most catastrophic war in American history was winding to a close.  That night, the President planned a welcome break from the cares of office, at a place called Ford’s theater.

A nation was stunned following the Lincoln assassination.  Vinnie herself, prostrate at the death of her friend and hero.

There arose a movement in Congress, to honor the Great Man with a full-length statue, to be placed in the Rotunda of the Capitol.  A competition would be held, to determine the artist.  Washington was then as it is now, but Vinnie had learned a political lesson or two since those naive days of five years earlier.  The petition attesting to her talents and worthiness for the project was signed by Andrew Johnson, Ulysses Grant, 31 Senators and 110 members of the House of Representatives. 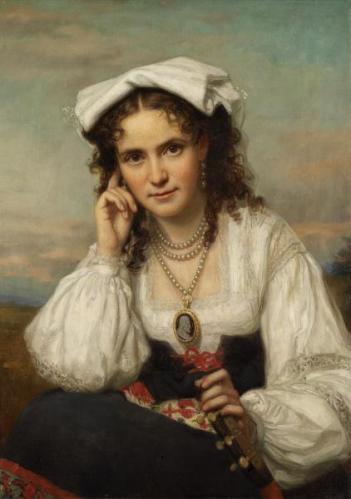 Then as now, Washington was a “Swamp” and a cesspit for the venal and self-interested. Now grown to an attractive young woman, Vinnie Ream was not without critics.  Kansas Senator Edmund Gibson Ross boarded with the Ream family during Johnson’s impeachment trial and cast the one vote absolving the President of “High Crimes and Misdemeanors”.

Imagine how THAT must’ve sounded.

There were sleazy insinuations that she was a “lobbyist” or even a “Public Woman” (prostitute).

Newspaper columnist Mrs. Jane Grey Swisshelm sniffed about how Vinnie “carries the day” with members of Congress: “Miss .… Ream … is a young girl of about twenty who has been studying her art for a few months, never made a statue, has some plaster busts on exhibition, including her own, minus clothing to the waist, has a pretty face, long dark curls and plenty of them. … [She] sees members at their lodgings or in the reception room at the Capitol, urges her claims fluently and confidently, sits in the galleries in a conspicuous position and in her most bewitching dress, while those claims are being discussed on the floor, and nods and smiles as a member rises…”

One editor had the last word, however, printing Swisshelm’s column under the headline “A Homely Woman’s Opinion of a Pretty One.”

On this day in 1866, Vinnie Ream was awarded by vote of Congress, the commission to create a full-size statue of Abraham Lincoln. She was 18 years old, the first woman to receive a such a commission as an artist and the youngest of either sex, to create a statue for the United States government.

Even then, Vinnie was not without detractors.  Michigan Senator Jacob Merritt Howard remarked, “Having in view the youth and inexperience of Miss Ream, and I will go further, and say, having in view her sex, I shall expect a complete failure in the execution of this work.”

Miss Lavinia Ream survived an effort to have her removed from her own studio by a vindictive House of Representatives, to enjoy the last word.  Her depiction of the Great Emancipator sculpted from a flawless block of Carrara marble stands in the Rotunda of the Capitol where it is seen by millions of visitors, from that day to this.