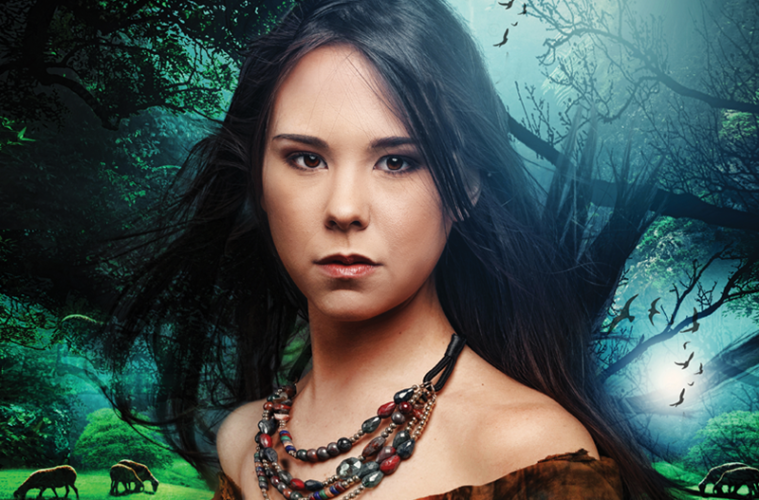 In 1607, approximately 100 English colonists settled along the James River in Tidewater-area Virginia.  They called their little settlement “Jamestown, the first permanent English settlement in the New World.  One of the colonists, John Smith, was exploring the Chickahominy River that December, when he and two others were captured by Powhatan warriors.  The Powhatan Confederacy of the Tsenacommacah comprised roughly 30 Algonquin speaking tribes, led by Paramount Chief Wahunsonacock. 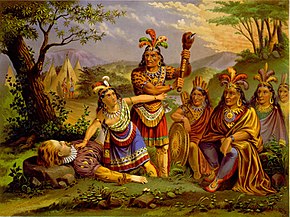 Smith’s two companions were killed.  John Smith himself was transported to the principle village of Werowocomoco, and brought before the Chief of the Powhatan.  His head was forced onto a large stone as a warrior raised a club to bash out his brains. Pocahontas, the favorite daughter of Wahunsonacock, rushed in and placed her head on top of his, stopping the execution.

Whether it actually happened this way has been debated for centuries. One theory describes the event as an elaborate adoption ceremony, though Smith himself wouldn’t have known it at the time. Afterward, Powhatan told Smith he would “forever esteem him as his son Nantaquoud”.

The year of Pocahontas’ birth is uncertain.  In the Spring of 1608, Smith described her as “a child of tenne years old”. At the time, Powhatans were commonly given multiple names, some secret and known only a select few. Names would change for important occasions, different names carrying different meanings depending on context. 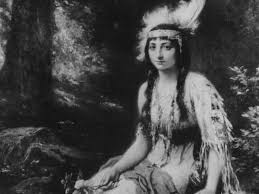 The “Starving Time”, the winter of 1609-1610, killed all but 60 of the 204 settlers then in Jamestown. Survivors were about to abandon the place when the Baron De La Warr, also known as Delaware, arrived in June with new supplies and new settlers. The settlement was rebuilt.  One of the new arrivals, John Rolfe, became the first tobacco planter in the area.

Pocahontas was a frequent visitor at this time.  English Captain Samuel Argall took her hostage in the spring of 1613, hoping it would help him negotiate a permanent peace with her father.

Pocahontas was treated as a guest rather than a prisoner and encouraged to learn English customs. She converted to Christianity and was baptized, Lady Rebecca.  Powhatan eventually agreed to terms for her release, but by then she’d fallen in love with John Rolfe.  The two were married on April 5, 1614, with the blessing of Chief Powhatan and the governor of Virginia. 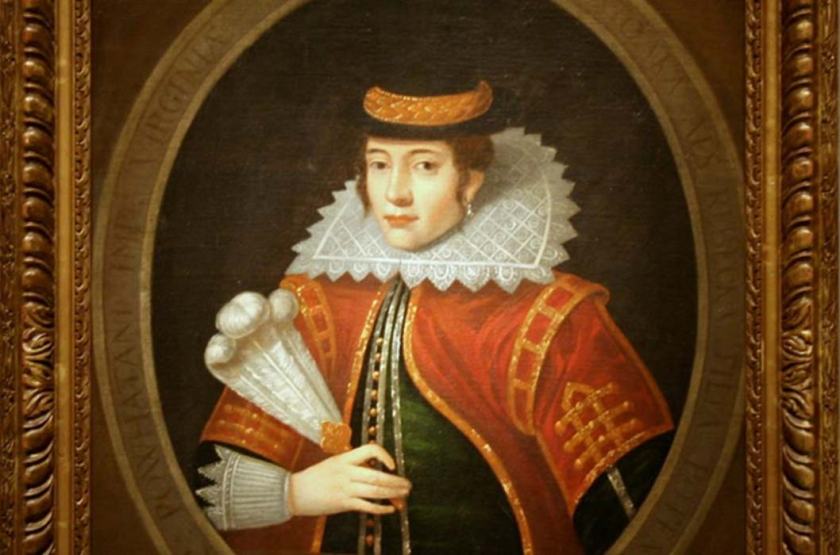 The marriage ensured peace between the Jamestown settlers and the Powhatan Confederacy for several years. Pocahontas gave birth to Thomas, the couple’s first child, in 1615. The couple sailed to England the following year, where she proved popular with English gentry. The couple was preparing to sail back to Virginia in March 1617 when Pocahontas sickened and died, of unknown causes.  She was twenty-one years old.

Some historians believe Pocahontas suffered from an upper respiratory condition, possibly pneumonia.  Others believe she died from dysentery.  The favorite daughter of Paramount Chieftain Powhatan of the Attanoughkomouck is buried at the parish church of St. George in Gravesend, in England. 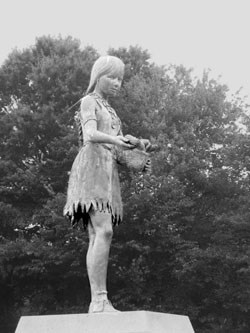 Later descendants of the “Indian Princess” include Glenn Strange, the actor who played Frankenstein in three Universal films during the 1940s and the character Sam Noonan, the popular bartender in the CBS series, “Gunsmoke”.  Astronomer Percival Lowell is a direct descendant of Pocahontas, as are Las Vegas performer Wayne Newton and former First Lady Edith Wilson, whom some describe as the first female President of the United States. But that must be a story for another day.

Predictably, Washington Post editorial writers were incensed: “Trump’s repeated reference to “Pocahontas” is racist first of all because it’s intended as a pejorative. Trump does not like Warren. It’s also racist because it seizes on a stereotypical Native American name to refer to an entire race — like calling an Asian man “Jackie Chan” or a black man “Frederick Douglass” (one of the president’s favorites). Worse yet, Trump is mushing together his tribes: At an event to honor Navajo heroes, he used the name of a Powhatan woman to disparage a senator who claimed Cherokee ancestry“.

Matoaka, also known as Amonute, daughter of the Paramount Chieftain Powhatan of the Attanoughkomouck who called her “Pocahontas” would be surprised I imagine, to learn that the Washington Post regards her name as a racial slur.