A popular story has Martin Luther nailing the document to the door of the Wittenberg Palace Church, but it may never have happened that way. Luther had no intention of confronting the Church at this time. This was an academic work, 95 topics offered for scholarly debate.

Hans Luder sent his son Martin to a series of Latin schools beginning in 1497.  There the boy learned the so-called “trivium”: grammar, rhetoric, and logic. He entered the University of Erfurt in 1501 at the age of 19, receiving his master’s degree in 1505. The elder Luder (“Luther”) intended that his son become a lawyer. Years later, the younger Luther described his Latin school education as time spent in purgatory, his University a “beerhouse” and a “whorehouse”.

Martin Luther was not cut out for that world.

He entered Law School in 1505 and dropped out almost immediately. His father was furious over what he saw as a wasted education. Martin entered an Augustinian cloister that July, saying “This day you see me, and then, not ever again.” 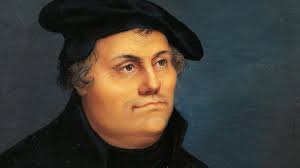 16th century Church doctrine taught that the Saints built a surplus of good works over a lifetime, sort of a moral bank account.  Like “carbon credits” today, positive acts of faith and charity could expiate sin. Monetary contributions to the church could, so it was believed, “buy” the benefits of the saint’s good works, for the sinner.

As he studied the bible, Luther came to believe that the church had lost sight of the central truths of Christianity. The Grace of God wasn’t traded as a medium of exchange, he believed, but rather through faith in Jesus Christ, as the Messiah. “This one and firm rock”, he wrote, “which we call the doctrine of justification, is the chief article of the whole Christian doctrine, which comprehends the understanding of all godliness”.

Papal “commissioner for indulgences” Johann Tetzel came to Wittenberg in 1516, selling expiation to raise money to rebuild St. Peter’s Basilica, in Rome.  A saying attributed to the Dominican friar, went “As soon as the coin in the coffer rings, the soul from purgatory springs.”

Martin Luther wrote to Archbishop Albrecht on October 31, 1517, objecting to this sale of indulgences. He enclosed a copy of his “Disputation of Martin Luther on the Power and Efficacy of Indulgences”, a document which came to be known as his “95 Theses”.

A popular story has Martin Luther nailing the document to the door of the Wittenberg Palace Church, but it may never have happened that way. Luther had no intention of confronting the Church at this time. This was an academic work, 95 topics offered for scholarly debate.

Be that as it may.  Luther’s ideas would rock the Christian world.

What seems to the modern mind as mere doctrinal differences, were life and death matters in the late middle and early modern ages. Archbishop Albrecht forwarded Luther’s note to Pope Leo X, who responded slowly and “with great care as is proper”.

Luther stood on dangerous ground. Jan Hus had been burned at the stake for such heresy, back in 1415. On this day in 1420, Pope Martinus I called for a crusade against the followers of the Czech priest, the “Hussieten”.

The Italian reformer Girolamo Savonarola confessed under torture to any number of inventions and then recanted, and confessed again. Savonarola was ritually stripped of his Dominican garments and hanged in 1498, while fire was ignited from below to consume his body.  Henry VIII’s famous break with the church over his divorce from Catherine of Aragon was still years in the future in 1521, the year Henry was named “Fidei Defensor” (“Defender of the Faith”). Nine years later, French theologian Jean Calvin would be forced to flee a deadly outbreak of violence against Protestant Christians. Jan Matthias, Bernhard Rothmann and Bernhard Knipperdolling would be tortured to death with white-hot pliers in the Münster marketplace in 1535, their corpses placed in cages and hanged from the steeple of St. Lambert’s Church.

The bones of the three were later removed but those three cages remain there, to this day. 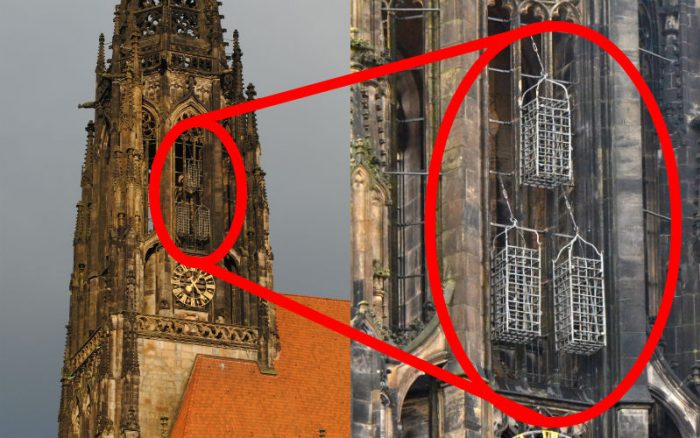 The papal bull had the effect of hardening Luther’s positions. He publicly burned it, on December 10. Twenty-four days later, Luther was excommunicated. A general assembly of the secular authorities of the Holy Roman Empire summoned Luther to appear before them in April, in the upper-Rhine city of Worms. The “Edict of Worms” of May 25, 1521, declared Luther an outlaw, stating “We want him to be apprehended and punished as a notorious heretic”. Anyone killing Luther was permitted to do so without legal consequence.

Luther went into hiding at Wartburg Castle. In 1516, Erasmus had expressed the wish that the holy text should be available in every language, “so that even Scots and Irishmen might read it”. It was there that Luther translated the New Testament from Greek into German, laying the foundation for other vernacular translations and, for the first time, making the bible accessible to the common man.

Radical sects took Luther’s teaching far beyond his intent.  Luther found himself in the odd position of defending the faith against more radical reformers. The Zwickau Prophets rejected holy scripture in favor of direct revelations from the holy spirit. The Anabaptists took the “equality of man” in radical egalitarian directions, sounding more like the principles Karl Marx would write about, in 1848.

Martin Luther’s reformations plunged Europe into a series of wars. The Peasant’s War of 1524-25 alone killed more Europeans than any conflict prior to the 1789 French Revolution. The established church would respond with counter-reformation, but the idea that Christian faith was more than the exclusive province of a special, segregated order of men, was here to stay.

On October 31, 1999, 482 years to the day from Martin Luther’s letter to Archbishop Albrecht, leaders of the Roman Catholic and Lutheran Churches signed the “Joint Declaration on the Doctrine of Justification”, ending the half-millennium old doctrinal dispute, once and for all.