Thus begins one of the more romanticized chapters in Alabama folklore.  The noble heroes of the Napoleonic wars, carving a new world of French language and culture from the wild frontier.

In the Treaty of Paris in 1783,  the British Crown formally recognized American Independence, ceding vast territories east of the Mississippi, effectively doubling the size of the fledgling United States and paving the way for westward expansion.

Those first ten years of independence was a time of increasing unrest for the American’s French ally, of the late revolution.  The famous Storming of the Bastille of July 1789 led to the Women’s March and the abolition of the French monarchy the following year.  King Louis XVI was beheaded by guillotine in January 1793 followed ten months later by the execution of the Queen Consort of France, Marie Antoinette.

A certain Corsican corporal emerged from this mess, with designs on La Louisiane.  Napoleon envisioned a vast north American empire stretching from the gulf of Mexico to the modern state of Montana and east to the Great Lakes, all of it centered on a vast trade in Caribbean sugar.

It wasn’t meant to be. The slave insurrection of Toussaint Louverture in the French colony of Saint-Domingue (modern-day Haiti) put a strain on French finances, to say nothing of the never-ending series of wars on the European landmass.  By 1803, Bonaparte needed to cash his chips and move away from the American table.

Robert R. Livingston, one of the committee of five who drafted the Declaration of Independence, was minister to the French Republic.  President Thomas Jefferson instructed Livingstone to open the way for commerce on the western frontier, authorizing the diplomat to pay up to $2 million for the city of New Orleans and lands on the east bank of the Mississippi river.

French Foreign Minister Talleyrand surprised the American diplomat, asking how much the Americans would pay for the Entire Louisiana territory.  The Louisiana Purchase of 1803 added 828,000 square miles of new territory at a cost of fifteen million dollars.

It was all for nothing.  The first fall of the Napoleonic dynasty brought about the restoration of the Bourbon monarchs in 1814, leading to the “100 days” and Napoleon’s final defeat in 1815, at a place called Waterloo.

Philadelphia and New Orleans both, would soon become sanctuaries for French refugees of the Napoleonic wars, and the Haitian Revolution. 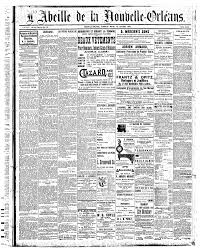 Jean-Simon Chaudron founded the Abeille Américaine in 1815 (The American Bee), Philadelphia’s leading French language newspaper.  Himself a refugee of Santo Domingo (Saint-Domingue), Chaudron catered to French merchants, emigres and former military figures of the Napoleonic era and the Haitian revolution.

The idea of a French agricultural colony in the old southwest (now the central southeastern states) first came about in 1816 and Chaudron used his newspaper to promote the project.

The Colonial Society came about that November (later renamed the Society for the Cultivation of the Vine and Olive), with General Charles Lefebvre-Desnouettes, at its head.

Congress soon took an interest in the project as did important politicians of the era including Thomas Jefferson, James Madison, and James Monroe.

The project made sense.  Many viewed these French refugees as fellow republicans, oppressed by a monarchy.  What better way to consolidate hold on western territories while at the same time building a domestic wine-making industry.  Furthermore, the work would prevent these people from forming yet another hotbed, of Napoleonic military insurrection. 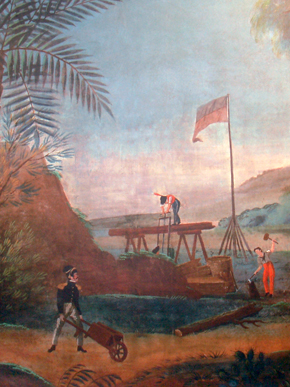 In January 1817, the Society for the Vine and Olive selected a site near the Tombigbee and Black Warrior Rivers in west-central Alabama, on former Choctaw lands.  On March 3, 1817, Congress passed an act “disposing of a tract of land to embrace four townships, on favorable terms to the emigrants, to enable them successfully to introduce the cultivation of the vine and olive.”

The act granted 92,000 acres, specifying a 14-year grace period in which to dedicate a ‘reasonable’ portion of the land to cultivation at a deferred cost of $2.00 per acre.

Thus began one of the more romanticized chapters in Alabama folklore.  The noble heroes of the Napoleonic wars, carving a new world of French language and culture from the wild frontier.

The reality wasn’t quite so romantic.  Grape vines and olive saplings were ordered from Europe but many of the plants, died en route.  The grape varieties selected were a poor match for the hot and humid climate of the region, the olive trees, a dismal failure.  Congressional stipulations were relaxed over time and farmlands converted, to cotton.

General Charles Lallemand, who joined the French army in 1791, replaced Lefebvre-Desnouettes as President of the Colonial Society. A man better suited to the life of an adventurer than that of the plow, Lallemand was more interested in the wars of Latin American independence, than grapes and olives.  By the fall of 1817, Lallemand and 69 loyalists had concocted a plan to sell the land they hadn’t yet paid for, to raise funds for the invasion of Texas.

In the end, only 150 of 347 original grantees ever came to Alabama. Some died, many fled.  Most were unwilling to trade comfortable lives in Philadelphia and New Orleans, for the hardship of life on the frontier. By the planting season of 1818, there were only 69 settlers in the colony.

Little is left of the Vine and Olive Colony but the French Emperor lives on, in western Alabama.  Marengo County commemorates Napoleon’s June 14, 1800 victory over Austrian forces at the Battle of Marengo.  The county seat, also known as Marengo, was later renamed Linden.  Shortened from the Napoleonic victory over Bavarian forces led by Archduke John of Austria, at the 1800 battle of Hohenlinden.

Hat tip Rafe Blaufarb of Florida State University, for a great write-up of this subject. http://www.encyclopediaofalabama.org