The Jonestown murder/suicide of November 18, 1978 produced the largest loss of civilian life in American history, until the Islamist terrorist attacks of September 11, 2001. 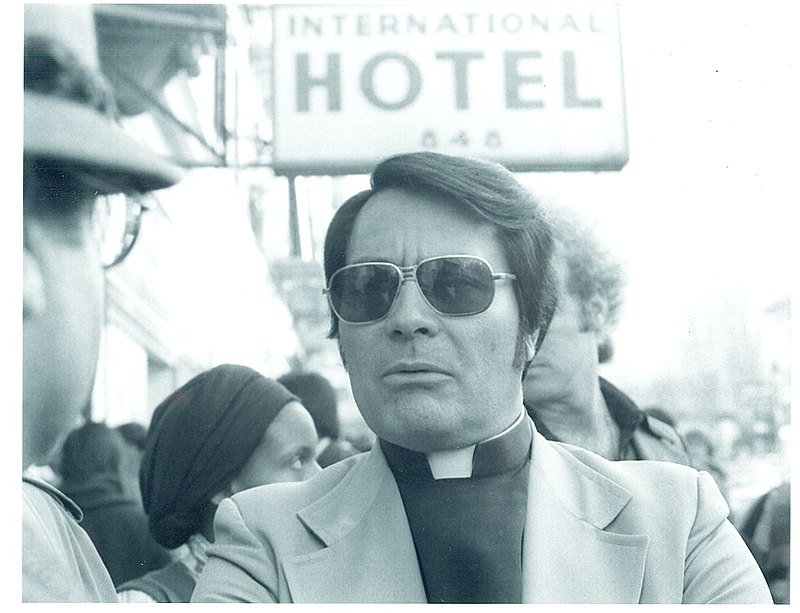 Those who knew him as a child remembered a “really weird kid“, obsessed with religion and death.  He’d hold elaborate, pseudo-religious ceremonies at the house, mostly funerals for small animals.  How Jim Jones got all those dead animals, was a matter for dark speculation.

It was depression-era rural Indiana, in the age of racial segregation.  Father and son often clashed over issues of race.  The two didn’t talk to each other for years one time, after the time the elder Jones refused to let one of his son’s black friends, into the house.

Jim Jones was a bright boy, graduating High School with honors, in 1949.  He was a voracious reader, studying the works of Stalin, Marx, Mao, Gandhi and Hitler and carefully noting the strengths and weaknesses, of each.

Along-standing interest in Leftist politics heightened during this period, when Jones was a regular at Communist Party-USA meetings.  There he’d rail against the McCarthy hearings, and the trials of Julius and Ethel Rosenberg.

Jones recalled he later asked himself, “How can I demonstrate my Marxism? The thought was, infiltrate the church.”

“Reverend” Jim Jones got his start as a student pastor at the Sommerset Southside Methodist Church but soon left, over issues of segregation.  He was a Social Justice Warrior in the age of Jim Crow. 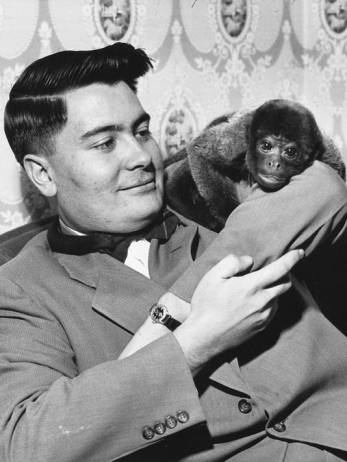 The New York Times reported in 1953, “declaring that he was outraged at what he perceived as racial discrimination in his white congregation, Mr. Jones established his own church and pointedly opened it to all ethnic groups. To raise money, he imported monkeys and sold them door to door as pets.”

Jones witnessed a faith-healing service and came to understand the influence to be had, from such an event.  He arranged a massive convention in 1956, inviting the Oral Roberts of his day, as keynote speaker. Reverend William Branham did not disappoint.  Soon, Reverend Jones opened his own mission with an explicit focus on racial integration.

Thus began the Peoples Temple of the Disciples of Christ.

Jones’ integrationist politics did little to ingratiate himself in 1950s rural Indiana.  Mayor and commissioners alike asked him to tone it down, while he received wild applause at NAACP and Urban League conventions with speeches rising to a thundering crescendo:  “Let My People GO!!!”

Jones spoke in favor of Kim Il-sung’s invasion of South Korea, branding the conflict a “war of liberation” and calling South Korea “a living example of all that socialism in the north has overcome.”

Jim and Marcelline adopted three Korean orphans, beginning what would become a family of nine including their only biological child, Stephan Ghandi.  The couple adopted a black boy in 1961 and called him Jim Jr., the Jones’ “rainbow family” a reflection of the pastor’s congregation. 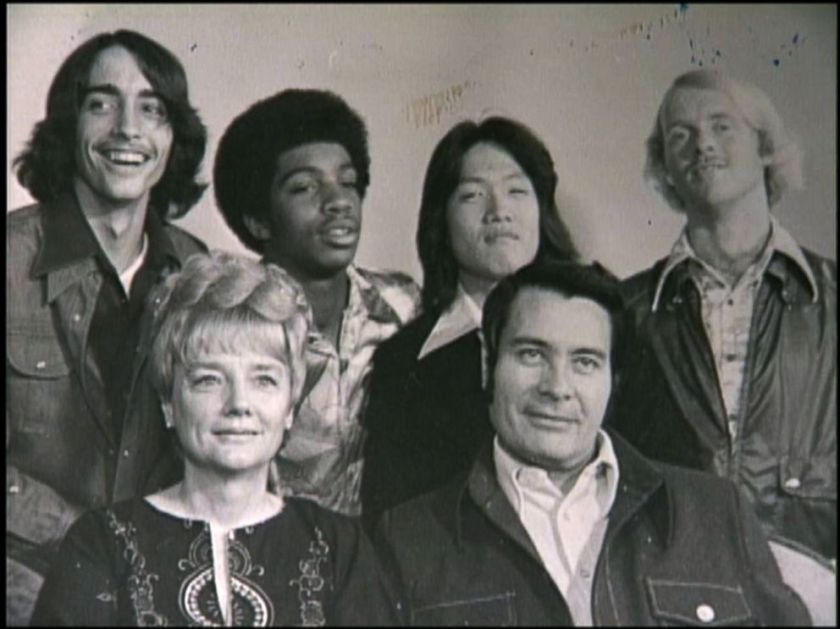 An apocalyptic streak began to show, as Jones preached of nuclear annihilation. He traveled to Brazil for a time, in search of a safe place for the coming holocaust.  He even gave it a date:  July 15, 1967. On returning from Brazil, the “Father” spoke to the flock.  The “children” would have to move.  To northern California, to a new and perfect, socialist, Eden.

For Jim Jones, religion was never more than a means to an end. ”Off the record” he once said in a recorded conversation, “I don’t believe in any loving God. Our people, I would say, are ninety percent atheist. Uh, we— we think Jesus Christ was a swinger…I must say, I felt somewhat hypocritical for the last years as I became uh, an atheist, uh, I have become uh, you— you feel uh, tainted, uh, by being in the church situation. But of course, everyone knows where I’m at. My bishop knows that I’m an atheist.”

The years in California were a time of rapid expansion from Temple Headquarters in San Francisco to locations up and down the “Golden State”.  Jones hobnobbed with the who’s who of Democratic politics, from San Francisco Mayor George Moscone to Presidential candidate Walter Mondale. Even First Lady Rosalynn Carter.

California Assemblyman Willie Brown called Jones a combination of Martin Luther King, Jr., Angela Davis, Albert Einstein and Mao Tse Tung.  Harvey Milk wrote to Jones after one visit: “Rev Jim, It may take me many a day to come back down from the high that I reach today. I found something dear today. I found a sense of being that makes up for all the hours and energy placed in a fight. I found what you wanted me to find. I shall be back. For I can never leave.”

Meanwhile, Jones was building the perfect socialist utopia in the South American jungles of Guyana, formally known as the “Peoples Temple Agricultural Project”.  Most simply called the place, “Jonestown”.

San Francisco Chronicle reporter Marshall Kilduff wrote in the summer of 1977, telling a grotesque tale of physical and sexual abuse, of brainwashing and emotional domination. Chronicle editors balked and Kilduff published the piece in the New West Magazine.

That was when Jones and his congregation left town and fled.  To Guyana.

A long standing drug addiction became more pronounced in Jonestown where the preacher spoke of the gospel of “Translation”, a weird crossing over from this life to some other, finer plane.

Some 68% of Jonestown faithful were black at this time, congregants who somehow got something from this place, they couldn’t get at home.  Inclusion.  Fulfillment.  Acceptance.  Whatever it was, the cult of Jonestown was mostly, a world of willing participants.

Mostly, but not entirely.  Those who entered Jonestown were not allowed to leave.  Those who escaped told outlandish tales of abuse:  mental, physical and sexual.

Former members of the Temple formed a “Concerned Relatives” group in the Fall of 1977, to publicize conditions afflicting family members, still in the cult.

California Congressman Leo Ryan led a fact-finding mission that November, to see things for himself.  The Congressional Delegation (CoDel) arrived at the Guyanese capital on November 15, with NBC camera crew and newspaper reporters, in tow.

The delegation traveled by air and drove the last few miles by limo, to Jonestown. The visit of the 17th was cordial at first, with Jones himself hosting a reception in the central pavilion.  Underlying menace soon came to the surface as a few Temple members expressed the desire, to leave with the delegation. Things went from bad to worse when temple member Don Sly attacked Congressman Ryan with a knife, the following day.

Ryan’s hurried exit with fifteen members of the Temple met no resistance, at first. The CoDel was boarding at the small strip in Port Kaituma, when Jones’ “Red Brigade” pulled up in a farm tractor, towing a trailer.   The new arrivals opened fire, killing Congressman Ryan and four others.  One of the supposed “defectors” produced a weapon, and wounded several more.

Back at the compound, Jones lost an already tenuous grasp on reality.

Fearing assault by parachute, lethal doses of cyanide were distributed along with grape “Flavor Aid” for 900+ members of the People’s Temple, including 304 children.

This wasn’t the first time the Jonestown flock believed they were ingesting poison, for The Cause.  It was about to be the last.

Jones spoke with an odd lisp which seemed to grow more pronounced, at times of excitement. You can hear it in the 45 minute “death tape“ below, his words sometimes forming a perfect “S“ and at other times, lapsing into a soft “TH” or some combination, of the two.

You can hear it clearly, in the recording.  Heads up dear reader.  If you care to listen, it’s 45-minutes of tough sledding.

The murder/suicide of November 18, 1978 produced the largest loss of civilian life in American history, until the Islamist terrorist attacks of September 11, 2001.

Jones:  How very much I’ve loved you. How very much I’ve tried, to give you the good life…We are sitting on a powder keg…I don’t think that’s what we wanted to do with our babies…No man takes my life from me, I lay my life down…If we can’t live in peace, then let us die in peace.
Christine [Miller]: Is it too late for Russia?
Jones: Here’s why it’s too late for Russia. They killed. They started to kill. That’s why it makes it too late for Russia. Otherwise I’d said, “Russia, you bet your life.” But it’s too late.
Unidentified Man: Is there any way if I go, that it’ll help?
Jones: No, you’re not going. You’re not going.
Crowd: No! No!
Jones: I haven’t seen anybody yet that didn’t die. And I’d like to choose my own kind of death for a change. I’m tired of being tormented to hell, that’s what I’m tired of.
Crowd: Right, right.
Jones: Tired of it.
Unidentified Man: It’s over, sister, it’s over … we’ve made that day … we made a beautiful day and let’s make it a beautiful day … that’s what I say.

“A lot of people are tired around here, but I’m not sure they’re ready to lie down, stretch out and fall asleep”. Jim Jones