Colonial Governor Evelyn Baring declared a state of emergency on this day in 1952, arresting hundreds of suspected leaders of the uprising. Reason and restraint seemed to have fled the land of Kenya, judging by the events that followed.

By the mid 1940s, British Colonial rule over the Kikuyu people of Kenya stretched out, for nearly fifty years.  Politically, Kenyan Africans broke into three blocs in those days.  First came the conservatives, who tended to support the status quo.  Next were moderate nationalists, those who sought an orderly return to indigenous rule over African soil. Last were the radical nationalists. This last group stood for African rule, Right Now, no matter the cost.

The first attempt to form a country-wide political party began in 1944, with the formation of the KASU, the Kenya Africa Study Union.  KASU was anti-colonial from the beginning, becoming increasingly radicalized through the World War 2 period and into the late 1940s.

The violent uprising of the early 1950s was called “Mau Mau”, an anagram of Uma Uma, roughly translating as “Get out, Get out”.

The first “blow against the Colonial regime” was struck on October 3, 1952, when a white woman was stabbed to death near her home in Thika, in the Kiambu County of Kenya.  Senior Chief Waruhiu wa Kungu was shot to death in his car less than a week later.

Governor Evelyn Baring declared a state of emergency on October 20, arresting hundreds of suspected leaders of the uprising.

Reason and restraint seemed to have fled the land, judging by the events that followed. Thousands of black Africans were hacked, burned or shot to death by Mau Mau militants, many mutilated and horribly tortured before death. Militants attacked the settlement of Lari on the night of March 25-26, herding Kikiyu men, women and children into huts before setting the whole thing, on fire.  Anyone who tried to escape was hacked with machetes, and thrown back into the flames.

The scene played out on dozens of occasions. Massacres were met with retaliatory raids by African security forces, at least partially overseen by British commanders.  There was even an instance biological warfare, when Mau Mau radicals used the poisonous milk of the African milk bush, to kill cattle.

Displeased with the government’s response to the uprising, settler groups formed their own “Kenya Police Reserve’s Special Branch”. God help the unlucky militant who fell into Their hands.

Black Africans were victims of most of the violence, with fatalities numbering into the thousands. Combined with those who simply “disappeared”, the number ran into the tens of thousands by the time the violence subsided in 1956. 62 Asians, predominantly Indians, were also killed, along with 58 whites. 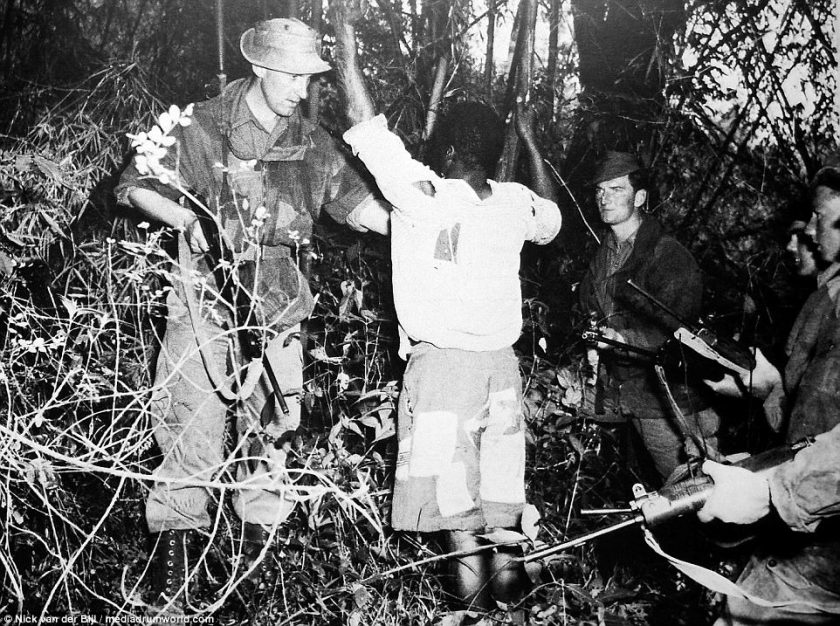 Barack Obama wrote in his memoir “Dreams from my Father”, that his grandfather Hussein Onyango Obama was captured and tortured by British authorities during the Mau Mau uprising. The now-former President wrote that his father was “selected by Kenyan leaders and American sponsors to attend a university in the United States, joining the first large wave of Africans to be sent forth to master Western technology and bring it back to forge a new, modern Africa“.

The elder Obama’s real history seems to differ from the public version, though the American media is remarkably quiet on the subject. The UK Daily Mail reports, under the headline “Obama’s grandfather tortured by the British? A fantasy (like most of the President’s own memoir)“, that Onyango was inclined to create “[H]istory to conform with the image he wished for himself…Following on from his forebears on both sides”.

If you’re interested in a little pop culture sauce to go with this turkey, the Mau Mau uprising inspired a number of similar rebellions throughout the region. One of them occurred in the East African coastal city of Zanzibar.

Thousands of Arabs and Indians were murdered in the 1964 Zanzibar rebellion, while thousands more fled for their lives.

Among those to escape were Bomi and Jer Bulsara, along with their 17-year-old son, Farrokh. The Bulsaras were Parsis from the Gujarat region of India, who had sent Farrokh to piano lessons from the age of 7. By the time he was 12, the boy had formed a school band, called “The Hectics”.

Farrokh was attending St. Peter’s boarding school at the time of the rebellion, and calling himself “Freddie”.

After fleeing Zanzibar, the family settled in Feltham, Middlesex, in England. Freddie Bulsara resumed his studies while joining in a series of bands throughout the late sixties. First “Ibex”, then “Wreckage” and finally, “Sour Milk Sea”.

In April 1970, Bulsara changed his name to “Mercury”, forming a band with guitarist Brian May, bassist John Deacon and drummer Roger Taylor. The group went on to record 18 #1 rock music albums, 18 #1 singles and 10 #1 DVDs. The group sold close to 300 million albums, being inducted into the Rock & Roll Music Hall of Fame in 2001, as “Queen”.