By the time the war got going, every seceding state but South Carolina sent regiments to fight for the Union, and even that state contributed troops. A surprising number of northern soldiers resigned commissions and fought for the south, including Barre, Massachusetts native Daniel Ruggles, Ohio Quaker Bushrod Johnson and New York native Samuel Cooper, to name a few. 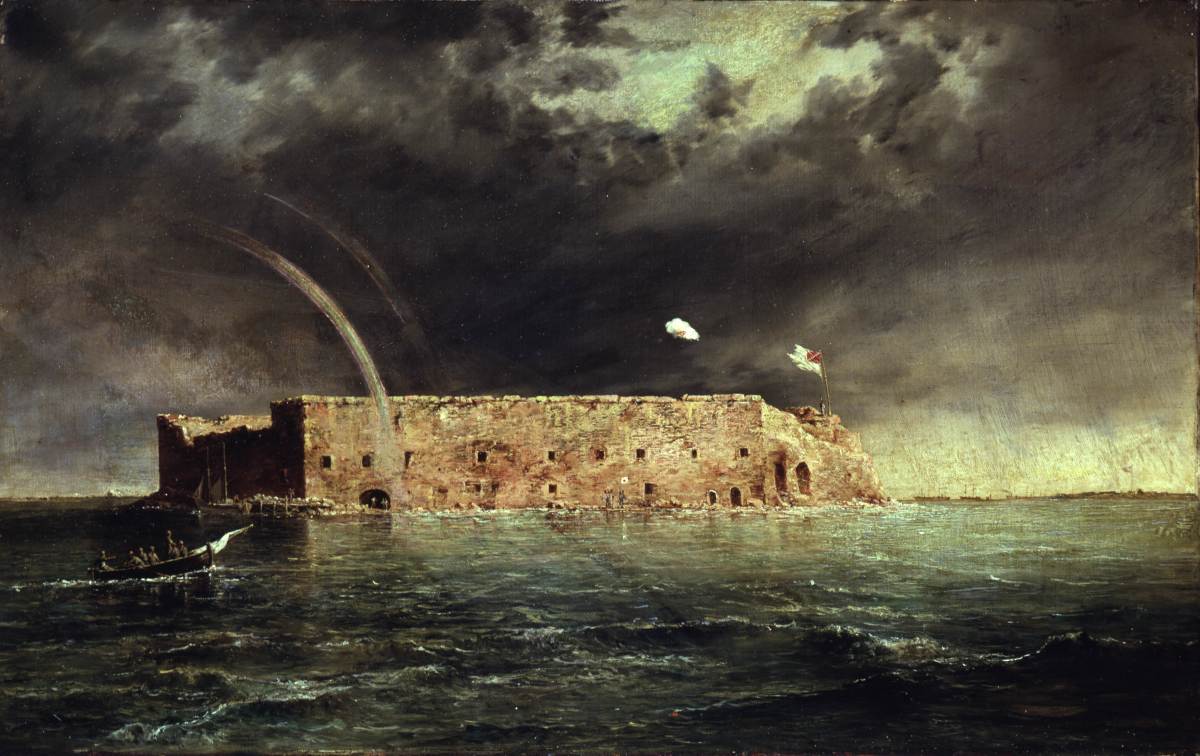 When the state of South Carolina seceded from the Union on December 20, 1860, the state government considered itself to be that of a sovereign nation. Six days later, United States Army Major Robert Anderson quietly moved his small command from the Revolution-era Fort Moultrie on Sullivan’s Island in Charleston harbor, to the as-yet to be completed Fort Sumter, a brick fortification at the mouth of the harbor.

President James Buchanan, a northern democrat with southern sympathies, believed secession to be illegal, but there was nothing he could do about it.  For months the President had vacillated, offering no resistance as local officials seized every federal government property, in the state.  Buchanan’s one attempt to intervene came in January, with the attempt to reinforce and resupply Anderson, via the unarmed merchant vessel “Star of the West”. Shore batteries opened up on the effort on January 9, 1861, effectively trapping Anderson and his garrison inside the only federal government property in the vicinity. 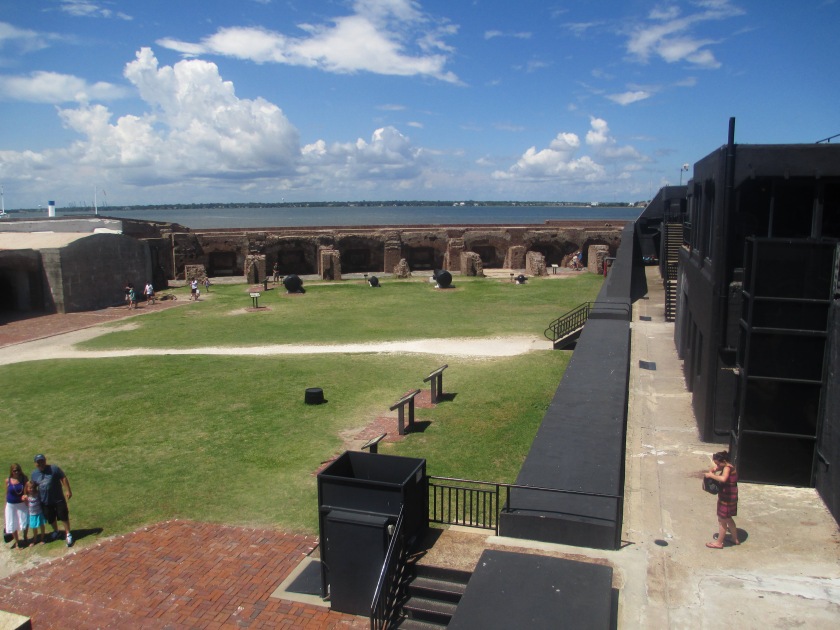 Mississippi followed with its own ordnance of secession that same day, followed quickly by Florida, Alabama, Georgia and Louisiana. Texas seceded on February 1.

The newly founded Confederate States of America could not tolerate the presence of an armed federal force at the mouth of Charleston harbor.  Secessionists debated only whether this was South Carolina’s problem, or that of the national government, located at that time in Montgomery, Alabama.  Meanwhile, the Federal government refused to recognize the Confederacy as an independent state.

Neither side wanted to be seen as the aggressor, both needing support from the border states.  Political opinion was so sharply divided at that time, that brothers literally wound up fighting against brothers.  By the time the war got going, every seceding state but South Carolina sent regiments to fight for the Union, and even that state contributed troops.

A surprising number of northern soldiers resigned commissions and fought for the south, including Barre, Massachusetts native Daniel Ruggles, Ohio Quaker Bushrod Johnson and New York native Samuel Cooper, to name a few.  But now I’m getting ahead of the story.

Confederate Brigadier General Pierre Gustave Toutant-Beauregard (I love that name) had resigned his post as superintendent of West Point and offered his services to the Confederacy.  Beauregard was placed in charge of Charleston in March, and immediately began to strengthen the batteries surrounding the harbor. 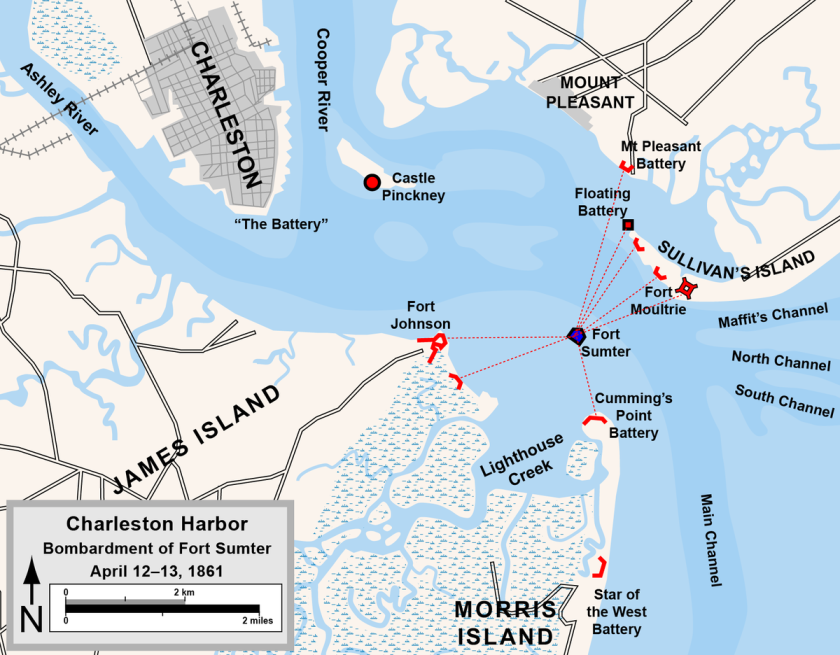 Fort Sumter was designed for a garrison of 650 in the service of 130 guns, nearly all of them pointed outward, positioned to defend the harbor against threats from the sea. In April 1861 there were only 60 guns, too much for Major Anderson’s 9 officers, 68 enlisted men, 8 musicians, and 43 construction workers.

Abraham Lincoln was inaugurated on March 4.  The resupply of Fort Sumter became the first crisis for the new administration. Lincoln notified South Carolina Governor Francis Pickens that he was sending supply ships, resulting in Beauregard’s ultimatum:  the Federal garrison was to evacuate immediately, or Confederate batteries would open fire.

When Major Anderson’s response was found lacking, shore batteries opened fire at 4:30 am on April 12th, 4,003 guns firing in counter-clockwise rotation. Abner Doubleday, Federal 2nd-in-command and the man erroneously credited with the invention of baseball, later wrote “The crashing of the shot, the bursting of the shells, the falling of the walls, and the roar of the flames, made a pandemonium of the fort.” 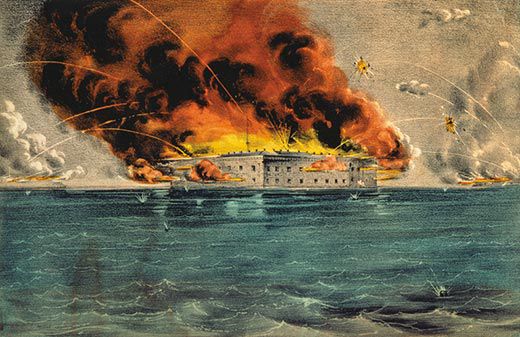 Two years later at Gettysburg, Norman Jonathan Hall would lose over 200 men from his brigade, in furious fighting at a critical breach in Union lines, near the”copse of trees”.  One day, a brass plaque would mark the spot of the “High Water Mark” of the Confederacy.  On this day, Lieutenant Hall raced through flames to rescue the colors, after a direct hit on the main flagpole knocked the flag to the ground.  His eyebrows were permanently burned off his face, but Hall and two artillerymen were able to jury-rig the pole so that, once again, Old Glory flew over Fort Sumter.

Thousands of shells were fired at Fort Sumter over a period of 34 hours. Federal forces fired back, though vastly outgunned. For all that, the only casualty was one Confederate horse.

The first fatalities of the Civil War occurred after the federal surrender on April 13. Allowed a 100-gun salute while lowering the flag the following day, one cannon misfired, killing Private Daniel Hough and mortally wounding Pvt. Edward Galloway.

The Civil War had begun, but few understood what kind of demons had just been unleashed. Robert Rhett, the rabble rousing editor of the Charleston Mercury Newspaper, offered to personally eat the bodies of all the slain in the coming conflict. Not wanting to be outdone, former Senator James Chesnut, Jr. said “a lady’s thimble will hold all the blood that will be shed,” promising to personally drink any that might be spilled.

The war between the states would destroy the lives of more Americans than the Revolution, WWI, WWII, and the wars in Korea, Vietnam, Iraq and Afghanistan, combined.

Abraham Lincoln was elected in 1860 with only 39.8 per cent of the popular vote in a four-way race against Northern Democrat Stephen A. Douglas, Constitutional Unionist John Bell and Southern favorite, Kentucky Democrat John Breckenridge.  President Lincoln did not receive a single electoral vote from south of the Mason-Dixon line.