The mind recoils in horror at the human body enveloped in flame, but that’s just the beginning.  Both Hurricane and Spitfire fighters place fuel tanks, directly in front of the pilot. The wind speed of an F5 tornado is 201MPH+. The nozzle speed from a common pressure washer, 243. The maximum speed of these two fighter aircraft are 340 and 363 respectively, the explosive force of escaping gasses, geometric multiples of those numbers. The burns resulting from exploding aviation fuel were called “Hurricane Burns”.  The wreckage wrought on the human form, beggars the imagination.

The attraction of taking flight in time of war is unmistakable.  For a lad of nineteen, twenty, twenty one, he is a latter-day knight at the prime of his life, mounting his steed of steel to do battle with evil.  Life seems indestructible and without end at that age, except, reality is shockingly different.  Of a group of 100 RAF airmen in the early phase of World War Two, a mere twenty escaped being killed, captured or incinerated alive.

O’Connell was assigned to RAF Limavady in the north of Ireland in the early months of World War Two, around the time the Capital Battleship Bismarck cleared the Kiel Canal and emerged into the Baltic Sea. On this day in 1941, Desmond O’Connell and six other flyers were assigned to find and take out the German warship.

The twin engine Whitworth Mark V ‘Whitley’ medium bomber never had a chance, overloaded as it was with extra crew, tanks full of fuel and bombs. The aircraft struggled to gain altitude and clipped the mountains outside of Limavady before striking the ground, and breaking apart.

Desmond O’Connell miraculously survived as did the rest of the crew, but his ordeal had just begun.  Soaked with fuel and suffering a skull fracture, he was crawling on his hands and knees when the fire caught up.   He remembers peering through the flames at his hands, as pieces came off of his gloves.  But those weren’t gloves.  The flesh was burning from his hands.

Archibald Hector McIndoe took to medicine at an early age, earning the first New Zealand fellowship to the prestigious Mayo Clinic in Rochester Minnesota, at only 24. Dr. McIndoe moved to London in 1930 and, unable to find work, joined in private practice with his great uncle, fellow Kiwi Sir Harold Gillies. Gillies was a pioneer in the field of plastic surgery by this time, made famous through his work in the Great War as “The Man who Fixed Faces“.

Dr. McIndoe was a talented surgeon:  confident, precise, and quick on his feet.  Under Harold Gillies’ direction, Archibald McIndoe became a leading figure in the field of plastic surgery.

With the outbreak of WW2, Dr. McIndoe took a position at Queen Victoria Hospital in East Grinstead, Sussex, where he headed up a center for plastic and maxillofacial surgery. A trickle of patients from the “Phoney War” period soon turned to a flood, during the Battle of Britain. 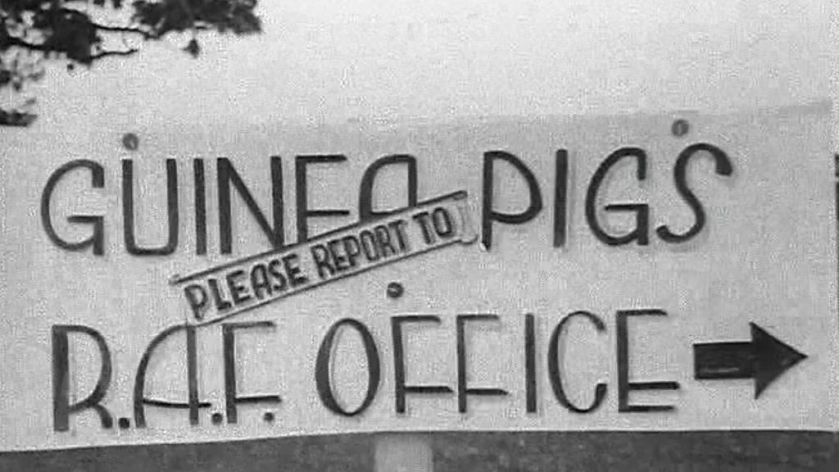 The mind recoils in horror at the human body enveloped in flame, but that’s just the beginning.  Both Hurricane and Spitfire fighters place fuel tanks, directly in front of the pilot. The wind speed of an F5 tornado is 201MPH+. The nozzle speed from a common pressure washer, 243. The maximum speed of these two fighter aircraft are 340 and 363 respectively, the explosive force of escaping gasses, geometric multiples of those numbers. The burns resulting from exploding aviation fuel were called “Hurricane Burns”.  The wreckage wrought on the human form, beggars the imagination.

Dr. McIndoe treated no fewer than 649 of these men, not only Brits but Canadians, Australians and New Zealanders.  There were Americans and French, Czechs and Poles.  Each man required dozens and sometimes hundreds of surgeries over agonizing years.  Sausage-like constructions of living flesh called “tubed pedicles” were “waltzed” up from remote donor sites on patient’s own bodies, to replace body parts consumed by the war.

To be rendered hideous and unsightly in service to one’s nation, a subject of horrified stares, is more than most can bear.  McIndoe understood as much and his treatment methods threw convention, out the window.  Inmates were treated not as patients or objects of pity, but as men.  They wore not the ‘jammies or those degrading hospital johnnys with their asses hanging out but their own clothing, and even uniforms.  They had parties and socialized.  Those who were able went “out on the town”.  They were the “Guinea Pig Club”, they socialized, threw parties.  More than a few relationships were formed with nurses, many ended in marriage.

“Others met women from East Grinstead, a place the ‘guinea pigs’ referred to as ‘the town that never stared’”. H/T nzhistory.govt.nz

Dr. McIndoe was knighted in 1947 and passed away at only fifty nine, but his work lives on in the African Medical and Research Foundation (AMREF), and the British Association of Plastic Surgeons (BAPS) for which he once served, as president.  The Blond McIndoe Research Foundation opened at the Queen Victoria Hospital in 1961, and continues to conduct research into new methods of wound management, to this day.

The Guinea Pig Club turned seventy-five years old in 2016.  Most of those early RAF members are gone now, but the organization lives on.  Today, new members come from places like the Falkland islands.  And Iraq.  And Afghanistan.

Feature image, top of page:  A scene from the 2012 play “The Guinea Pig Club”, depicts the agonies of WW2-era RAF airmen, treated for severe burns

“Until the spring of 1944, the priority for manpower in the UK was not the navy, RAF, army, or even the merchant navy, but the Ministry of Aircraft Production. In the war, Britain alone built 132,500 aircraft, a staggering achievement – especially when considering that Fighter Command in the battle of Britain never had more than 750 fighters”. H/T HistoryExtra.com