Steel was in critically short supply by the time the US entered the war in 1917, the need for new ships, higher than ever.  Something had to be done.  One answer, was concrete. 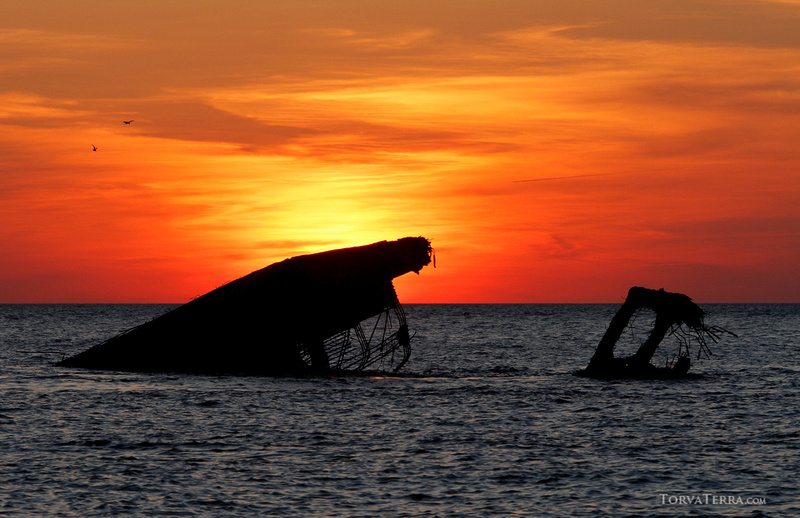 The final third of the nineteenth century was a period of unprecedented technological advancement, an industrial revolution of international proportion.

The war born of the second industrial revolution, would be like none before.

From the earliest days of the “War to end all Wars”, the Triple Entente powers imposed a surface blockade on the Central Powers of Germany, Austria-Hungary and the Ottoman Empire, throttling the maritime supply of goods and crippling the capacity to make war. One academic study from 1928 put the death toll by starvation at 424,000, in Germany alone.

The Kaiser responded with a blockade of his own, a submarine attack on the supply chain to the British home islands. It was a devastating incursion against an island adversary dependent on prodigious levels of imports.

1915 saw the first German attacks on civilian shipping.  Total losses for that year alone came to 370 vessels against a loss of only 16 U-Boats.  Steel was in critically short supply by the time the US entered the war in 1917 with the need for new ships, higher than ever.  Something had to be done.  One answer, was concrete.

The idea of concrete boats was nothing new.  In the south of France, Joseph Louis Lambot experimented with steel-reinforced “ferrocement”, building his first dinghy in 1848.

By the outbreak of WW1, Lambot’s creation had sunk to the bottom of a lake, where it remained for 100 years, buried deep in anaerobic mud.  Today you may see the thing at the Museum of Brignoles, in the south of France.

Italian engineer Carlo Gabellini built barges and small ships of concrete in the 1890s.  British boat builders experimented with the stuff, in the first decade of the 20th century.  The Violette, built in Faversham in 1917, is now a mooring hulk in Kent, the oldest concrete vessel still afloat. 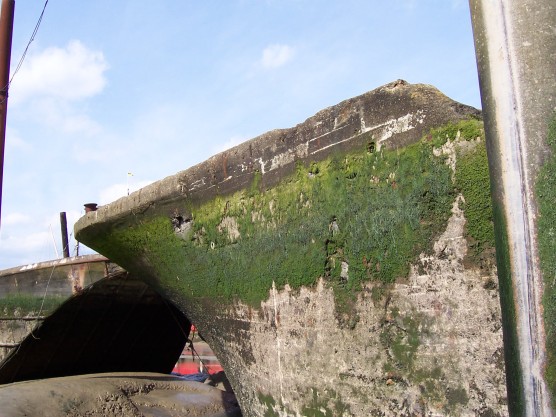 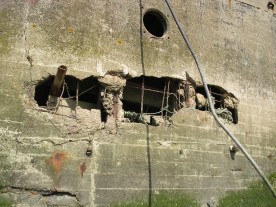 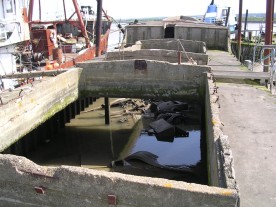 The Violette built in 1917, is the oldest concrete ship, still afloat.

The American government contracted with Norwegian boat builder N.K. Fougner to create a prototype, the 84-foot Namsenfjord launched in August, 1917.  The test was judged a success.  President Woodrow Wilson approved a twenty-four ship fleet, consisting of steamers and tankers to aid the war effort.  The first and largest of the concrete fleet, the SS Faith was launched on this day in 1918, thirty days ahead of schedule.

The New York Times was ecstatic: 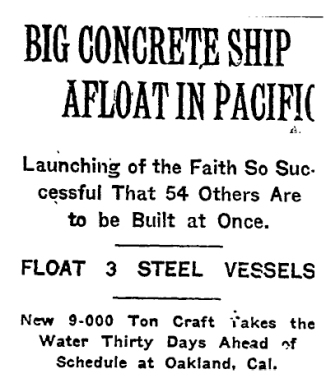 ‘”When the first steel vessels were built people said they would not float, or if they did they would be too heavy to be serviceable,” said W. Leslie Comyn, President of the concern which built the boat. “Now they say the same about concrete. But all the engineers we have taken over this boat, including many who said it was an impossible undertaking, now agree that it was a success”‘.

All that from a west coast meadow with two tool sheds, a production facility 1/20th the cost of a conventional steel shipyard.

The Great War ended eight months later with only half the concrete fleet, actually begun.  None were completed.  All were sold off to commercial shippers or for storage, or scrap.

For all its advantages as a building material, ferrocement has numerous drawbacks.  Concrete is a porous material, and chunks tend to spall off from rusting steel reinforcements.  We’ve all see that on bridge abutments.  Worst of all, the stuff is brittle.  On October 30, 1920, the SS Cape Fear collided with a cargo ship in Narragansett Bay Rhode Island and “shattered like a teacup”, killing 19 crewmen.

SS Palo Alto was a tanker-turned restaurant and dance club, before breaking up in heavy waves, in Monterey Bay.

SS San Pasqual was damaged in a storm in 1921 and became a warehouse for the Old Times Molasses Company of Havana. She was converted to a coastal defense installation during WW2 and outfitted with machine guns and cannon, then becaming a prison, during the Cuban revolution. The wreck was later converted to a 10-room hotel before closing, for good.  That was some swanky joint, I’m sure.

The steamer SS Sapona was sold for scrap and converted to a floating liquor warehouse during Prohibition, later grounding off the shore of Bimini during a hurricane.  All the liquor, was lost.

The SS Atlantus was destined to be sunk in place as a ferry dock in Cape May New Jersey in 1926, until she broke free in a hurricane and ran aground, 150-feet from the beach. Several attempts were made to free the hulk, but none successful. At one time, the wreck bore a billboard. Advertising a marine insurance outfit, no less. Kids used to swim out and dive off, until one drowned. The wreck began to split up in the late 1950s. If you visit sunset beach today, you might see something like the image, at the top of this page.

In 1942, the world once again descended into war.  With steel again in short supply, the Roosevelt administration contracted for another concrete fleet of 24 ships.  The decades had come and gone since that earlier fleet.  This time, the new vessels came off the production line at the astonishing rate of one a month featuring newer and stronger aggregates, lighter than those of years past. Like the earlier concrete fleet, most would be sold off after the war.  Two of the WW2 concrete fleet actually saw combat service, the SS David O. Saylor and the SS Vitruvius.

In March 1944, an extraordinary naval convoy departed the port of Baltimore. including the concrete vessels, SS David O. Saylor and SS Vitruvius.  It was the most decrepit procession to depart an American city since Ma and Pa Joad left Oklahoma, for California.  A one-way voyage with Merchant Marines promised a return trip, aboard Queen Mary.

“We left Baltimore on March 5, and met our convoy just outside Charleston, South Carolina,” Powers recalled. “It wasn’t a pretty sight: 15 old ‘rustpots.’ There were World War I-era ‘Hog Islanders’ (named for the Hog Island shipyard in Philadelphia where these cargo and transport ships were built), damaged Liberty Ships.”

1,154 U-boats were commissioned into the German navy before and during WW2, some 245 of which were lost in 1944.  The majority of those, in the North Atlantic.  The allied crossing took a snail’s pace at 33 days and, despite the massive U-boat presence, passed unmolested into Liverpool.  Powers figured, “The U-Boats were not stupid enough to waste their torpedoes on us.” 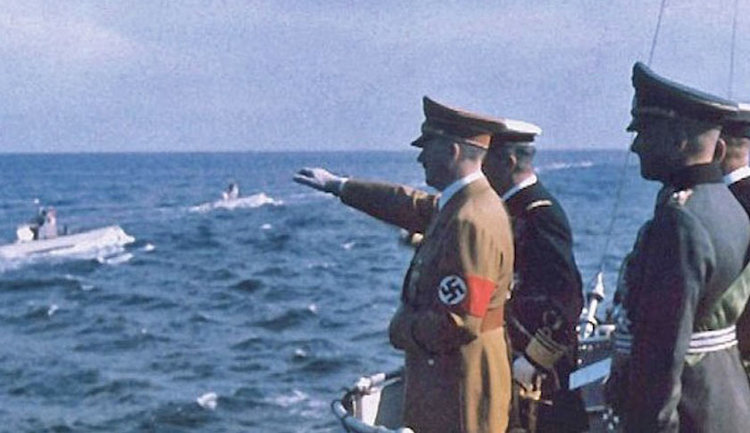 On June 1, Seaman Powers’ parade of misfit ships joined a procession of 100 British and American vessels.  Old transports and battered warships, under tow or limping across the English channel at the stately pace of five knots.  These were the old and the infirm, the combat damaged and obsolete.  There were gaping holes from mine explosions, and the twisted and misshapen evidence of collisions at sea. Some had superstructures torn by some of the most vicious naval combat, of the European war.  Decrepit as they were, each was bristling with anti-aircraft batteries, Merchant Mariners joined by battle hardened combat troops.

Their services would not be required.  The allies had complete air supremacy over the English channel.

These were the “gooseberries” and “blockships”.   Part of the artificial “Mulberry” harbors intended to form breakwaters and landing piers in support of the D-Day landing, charged with the difficult and dangerous task of scuttling under fire at five points along the Norman coast.  Utah.  Omaha.  Gold.  Juneau.  Sword.

Later on, thousands more merchant vessels would arrive in support of the D-Day invasion.  None more important than those hundred or so destined to advance and die, the living breakwater without which the retaking of continental Europe, would not have been possible.

The British Army lost 19,240 killed on the first Day of the WW1 Battle of the Somme. French and German forces suffered a whopping 975,000 casualties on one single day of the ten-month Battle of Verdun. Imperial Russia lost five million soldiers, in the first two years of WW1. Many single day’s fighting of the great battles of 1916 produced more casualties than every European war of the previous 100 years. Combined.