As inflation approached escape velocity, the government responded by changing the name, and the color, of the currency.  The Pengö was replaced by the Milpengö (1,000,000 Pengö), and then the Bilpengö (1,000,000,000,000) and, finally by the (supposedly) inflation-indexed Adopengö. This spiral resulted in the largest denominated note in history, the Milliard Bilpengö. A Billion Trillion Pengö. The thing was worth twelve cents.

You’ve worked all your life. You’ve supported your family, paid your taxes, and paid your bills. You’ve even managed to put a few bucks aside, in hopes of a long and happy retirement.

The subject of currency devaluation is normally left to eggheads and academics, the very term sufficient to make most of us tip over and hit our heads on the floor, from boredom.  But, what happens to that “nest egg”, if the cost of the coffee in your hand doubles in the time it takes, to drink it? 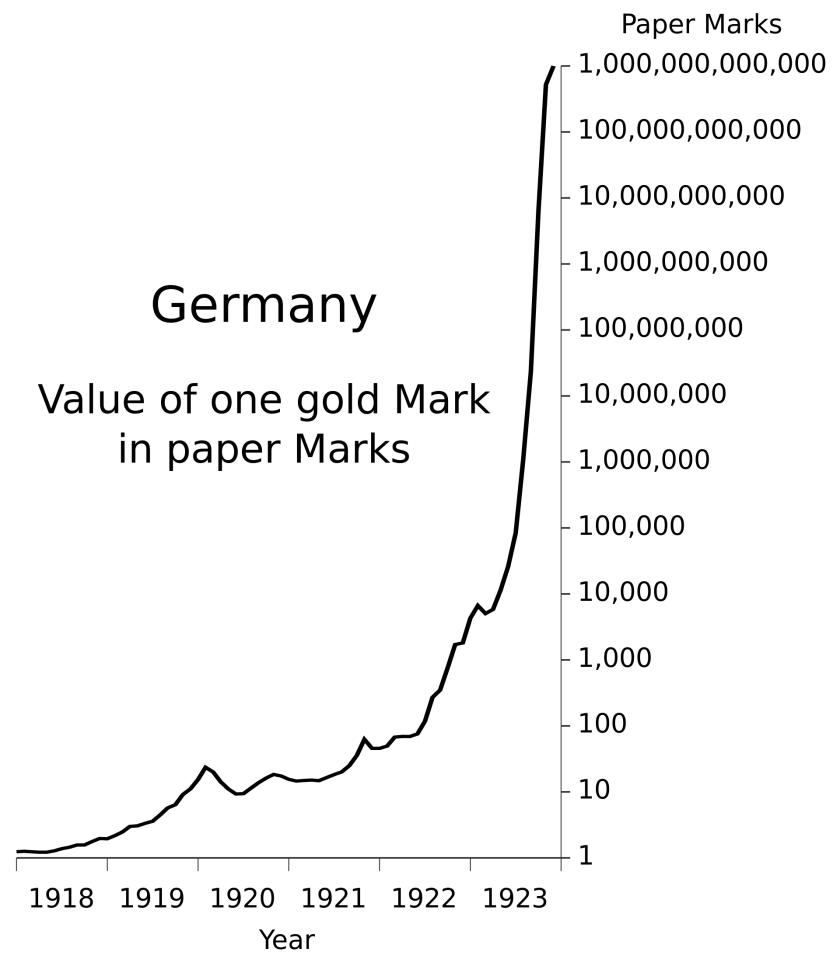 History records 58 such instances of hyperinflation.  Current events in Venezuela constitute #59 despite the largest proven oil reserves on the planet, while certain American politicians and celebrity types, are nowhere to be found.

In antiquity, Roman law required a high silver content in the coinage of the republic. Precious metal made the coins themselves objects of value, and the Roman economy remained relatively stable for 500 years. Republic morphed into Empire over the 1st century BC, leading to a conga line of Emperors minting mountains of coins in their own likenesses. Slaves worked to death in Spanish silver mines. Birds fell from the sky over vast smelting fires, yet there was never enough to go around. Silver content inexorably reduced, until the currency itself collapsed in the 3rd century reign of Diocletian. An Empire and its citizens were left to barter as best they could, in a world where currency had no value.

The assistance of French King Louis XIV was invaluable to Revolutionary era Americans, at a time when American inflation rates approached 50% per month.  Yet, French state income was only about 357 million livres at that time, with expenses exceeding one-half Billion. France descended into its own Revolution, as the government printed “assignat”, notes purportedly backed by 4 billion livres in property expropriated form the church. 912 million livres were in circulation in 1791, rising to nearly 46 billion in 1796. One historian described the economic policy of the Jacobins, the leftist radicals behind the Reign of Terror: “The attitude of the Jacobins about finances can be quite simply stated as an utter exhaustion of the present at the expense of the future”.

In the waning days of the Civil War, the Confederate dollar wasn’t worth the paper it was printed on. Paper money crashed in the post-Revolutionary Articles of Confederation period as well, when you could buy a live sheep for two silver dollars, or 150 paper “Continental” dollars. Roles reversed and creditors hid from debtors, not wanting to be repaid in worthless paper money.  Generations after our founding, a thing could be described as worthless as “Not worth a Continental”. 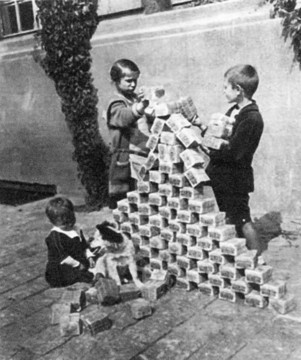 Germany was a prosperous country in 1914, with a gold-backed currency and thriving industries in optics, chemicals and machinery. The German Mark had approximately equal value with the British shilling, the French Franc and the Italian Lira, with an exchange rate of four or five to the dollar.

While the French third Republic levied an income tax to pay for the “Great War”, the Kaiser suspended the gold standard and fought the war on borrowed money, believing he could get it back from conquered territories.

The Austro-Hungarian Empire was also on the losing side, and broken up after the war. Lacking the governmental structures of established states, a newly independent Hungary began to experience inflation. Before the war, one US Dollar bought you 5 Kronen.  In 1924, it was 70,000.  Hungary replaced the Kronen with the Pengö in 1926, pegged to a rate of 12,500/1.

Hungary became a battleground in the latter stages of WW2, between the military forces of Nazi Germany and the USSR.  90% of Hungarian industrial capacity was damaged, half destroyed altogether. Transportation became difficult with most of the nation’s rail capacity, damaged or destroyed. What remained was either carted off to Germany, or seized by the Russians as reparations.

The loss of all that productive capacity led to scarcity of goods, and prices began to rise. The government responded by printing money. Total currency in circulation in July 1945 stood at 25 Billion Pengö. Money supply rose to 1.65 Trillion by January, 65 Quadrillion and 47 Septillion July. That’s a Trillion Trillion. Twenty-four zeroes.

Banks received low rate loans, so that money could be loaned to companies to rebuild. The government hired workers directly, giving out loans to others and in many cases, outright grants. The country was flooded with money, the stuff virtually grew on trees, but there was nothing to back it up.

The government responded by changing the name, and the color, of the currency.  The Pengö was replaced by the Milpengö (1,000,000 Pengö), which was replaced by the Bilpengö (1,000,000,000,000), and finally by the (supposedly) inflation-indexed Adopengö. This spiral resulted in the largest denominated note in history, the Milliard Bilpengö. A Billion Trillion Pengö. The thing was worth twelve cents.

One more currency replacement and all that Keynesian largesse would finally stabilize the currency, but at what price? Real wages were reduced by 80% and creditors wiped out. The fate of the nation was sealed when communists seized power in 1949. Hungarians could now share in that old Soviet joke. “They pretend to pay us, and we pretend to work”.

The ten worst hyperinflations in history occurred during the 20th century, including Zimbabwe in 2008, Yugoslavia 1994, Germany 1923, Greece 1944, Poland 1921, Mexico 1982, Brazil 1994, Argentina 1981, and Taiwan 1949. The common denominator in all ten were massive government debt and a currency with no inherent value, excepting what a willing buyer and a willing seller agreed it was worth.

In 2015, Boston University economist Laurence Kotlikoff testified before the Senate Budget Committee. “The first point I want to get across” he said, “is that our nation is broke. Our nation’s broke, and it’s not broke in 75 years or 50 years or 25 years or 10 years. It’s broke today”.  Kotlikoff went on to describe the “fiscal gap”, the difference between US’ projected revenue, and the obligations our government has saddled us with. “We have a $210 trillion fiscal gap at this point”.   Nearly twelve times GDP – the sum total of all goods and services produced in the United States.

This morning, Treasurydirect.gov quotes US’ total outstanding public debt at $21,205,959,245,607.94, more than the combined GDP of the bottom 174 nations, on earth.  All that, in a currency unmoored from anything objective value. What could go wrong?