There was barely a man in the regiment, who wouldn’t have walked over the proverbial “bad road & broken glass”, for that dog. 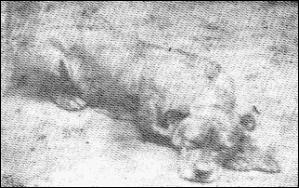 Sallie was four weeks old in 1861, when she was given as a gift to 1st Lieutenant William Terry, of the 11th Pennsylvania Volunteer Infantry.  Terry made her the regimental mascot, a post she would hold for the duration of the Civil War.

Sallie was a Staffordshire Bull Terrier, or possibly a Pit Bull, brindle in color.  She would tag along on long marches, and kept the men of the regiment company in their camps.  She learned the drum roll announcing reveille, and loved to help wake the sleeping soldiers in the morning.

If you’ve ever had a dog in your life, you know how that goes.

There was barely a man in the regiment, who wouldn’t have walked over the proverbial “bad road & broken glass”, for that dog.   Sallie’s first battle came at Cedar Mountain, in 1862. No one thought of sending her to the rear before things got hot, so Sallie took up a position along with the colors, barking ferociously at the adversary.

There she remained throughout the entire engagement, as she would do at Antietam, Fredericksburg, Chancellorsville and Spotsylvania.

It was said that Sallie only hated three things:  Rebels, Democrats, and Women.

Sallie marched with “her” soldiers in review, in the spring of 1863.  Abraham Lincoln was reviewing the army at the time, when he spotted the dog from the center of the reviewing stand, and raised his famous top hat in salute.

At Gettysburg, Sallie was separated from her unit in the chaos of the first day’s fighting. They found her five days later, on July 6, parched with thirst and weakened by hunger.

She’d been standing guard over her dead and dying comrades, since July 1.

It’s been said that only a dog is capable of that kind of loyalty, yet virtue in one is capable of inspiring virtue in another. So it was on February 5, 1865. Sallie was struck in the head by a bullet at Hatcher’s Run. She was killed instantly.  Several men of the 11th PA laid down their arms and buried her, right then and there.  Even though they were still under fire from the Confederate side.

There is a tale about Sallie, I don’t know if it’s true.  Probably not but it’s a nice story.

After the battle in which Sallie was killed, the soldiers were moving out when a small whining was heard from within a hollowed-out tree.  Someone went to the tree and found several small puppies, believed to be Sallie’s.  They’d had no idea that she was pregnant, or how puppies came to be in that hollowed out tree.  The soldiers gave them to local civilians, so that Sallie’s bloodline might live on. 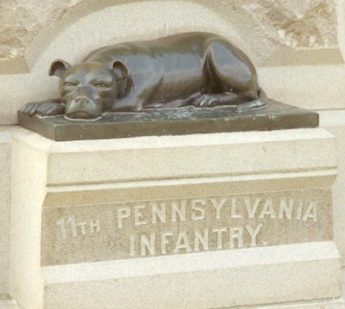 Twenty-seven years after Gettysburg, surviving veterans of the regiment returned to dedicate a memorial to those members of the 11th Pennsylvania, who lost their lives on that field of battle.

Today, 1,320 memorial statues, monuments and markers dot the landscape of the Gettysburg battlefield.  Among all of them there are only two, raised in the memory of a dog.  The first is a Celtic cross, erected in honor of New York’s Irish Brigade.  Ironically, it is sculpted by a Confederate veteran of the battle.  At the foot of the cross rests a life-sized likeness of an Irish wolfhound, symbolizing honor and fidelity.. 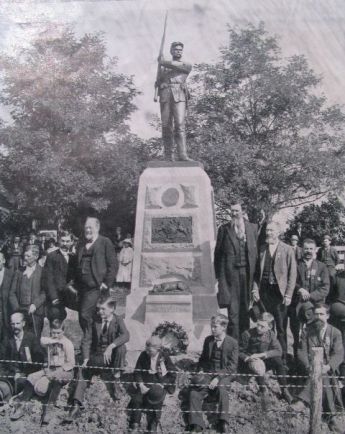 The other includes a brindle colored Terrier, named Sallie.  The only one of the two to have actually participated in the battle.

The monument depicts an upright Union soldier, rifle at the ready.  By unanimous consent of the veterans themselves, Sallie’s likeness looks out from the foot of the statue, where she guards over the spirits of “her boys”, for all eternity.

“Sallie was a lady,
she was a soldier too.
She marched beside the colors,
our own red white and blue.
It was in the days of our civil war,
that she lived her life so true”.

Feature image, top of page:  Only known picture of Sallie, herself.  Photographer unknown.