Since 1950, there have been 32 Broken Arrow incidents.  As of this date, six nuclear weapons have been lost and never recovered.

At one time, the C-124 was the world’s largest military transport aircraft.  Weighing in at 175,000lbs with a wingspan of 175ft, four 3,500 horsepower Pratt & Whitney propeller engines drive the air frame along at a stately cruising speed of 246 mph.  Manufacturer Douglas Aircraft called the aircraft “Globemaster”.  Airmen called the plane “Old Shaky”.

The Air Force C-124 Globemaster transport left its base in Delaware on July 28, 1957, on a routine flight to Europe. On board were a crew of seven, three nuclear bombs, and one nuclear core. The flight would routinely have taken 10-12 hours.  This trip was destined to be anything but routine. 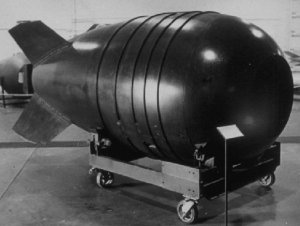 Exactly what went wrong remains a mystery, due to the sensitive nature of the cargo. Two engines had to be shut down shortly into the mission, and the aircraft turned back.  The nearest suitable airfield was the Naval Air Station in Atlantic City, but that was too far. Even at maximum RPMs, the best the remaining two engines could do was slow the massive aircraft’s descent into the sea.

An emergency landing on open ocean is not an option with such a large aircraft.  It would have broken up on impact with the probable loss of all hands.   Descending rapidly, the crew would have jettisoned everything they could lay hands on, to reduce weight.  Non-essential equipment would have gone first, then excess fuel, but it wasn’t enough.  With only 2,500ft and losing altitude, there was no choice left but to jettison those atomic bombs.

At 3,000lbs apiece, two of the three bombs were enough to do the job, and the C-124 made it safely to Atlantic City.  What became of those two atomic bombs remains a mystery.  Most likely, they lie at the bottom of the ocean, 100 miles off New Jersey.

The United States Department of Defense has a term for accidents involving nuclear weapons, warheads or components, which do not involve the immediate risk of nuclear war.  Such incidents are called “Broken Arrows”.

Broken Arrows include accidental or unexplained nuclear or non-nuclear detonation of an atomic weapon, the loss of such a weapon with or without its carrying vehicle, and the release of nuclear radiation resulting in public hazard, whether actual or potential.

Since 1950, there have been 32 Broken Arrow incidents.  As of this date, six nuclear weapons have been lost and never recovered.

If you’re interested, a handy “Nuclear Folly Locator” appears at the link below, based on Rudolph Herzog’s “A Short History of Nuclear Folly”.  It makes for some very comforting reading.