One hundred and fifty-four years ago today, the Union and the Confederacy met in the south central Pennsylvania town of Gettysburg.

After two years of civil war, Robert E. Lee wanted to take the war to his adversary. Lee intended to do enough damage to create overwhelming political pressure in the North, to end the war and let the South go its own way. Lee had his best cartographers draw up maps of the Pennsylvania countryside, all the way to Philadelphia.  And then he took his Army of Northern Virginia into Pennsylvania.

One hundred and fifty-four years ago today, the Union and the Confederacy met in the south central Pennsylvania town of Gettysburg.

Joseph “Fighting Joe” Hooker, to whom Lee contemptuously referred as “Mr. F.J. Hooker”, wanted to attack Richmond, but Lincoln ordered him to intercept Lee’s army to protect Washington DC.  Hooker was replaced on the 28th by Major General George Gordon Meade, “that damn old goggle eyed snapping turtle” to his men, in a move that so surprised him that he thought he was being arrested over army politics, when the messenger came into his tent. 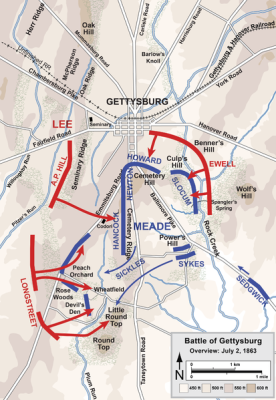 The “North” came up from the south that day, the “South” came down from the north.  No one wanted the fight to be in Gettysburg, it was more like an accidental collision. What started out as a skirmish turned into a general engagement as fighting cascaded through the town. Confederate forces held the town at the end of the day, with the two armies’ taking parallel positions along a three-mile-long “fishhook” from Cemetery Hill and Culp’s Hill to the north, toward two prominences known as Big and Little Round Top to the south.

Fighting would continue and prove inconclusive at Culp’s Hill on day two, as the two armies stretched their position toward the Round Tops. Dan Sickles, the Tammany Hall politician best known for murdering the nephew of Francis Scott Key (he would be the first in American legal history to plead temporary insanity), had been ordered to move his corps into position on cemetery ridge, anchored at Little Round Top. Instead he took his corps a mile forward, into a Peach Orchard where they were torn apart in the Confederate assault. Some of the most savage fighting of the Civil War took place that day, at places like Devil’s Den, the Wheat Field, and bloody run. Sickles himself lost a leg to a cannonball. There was a foot race to the top of Little Round Top, leading to as many as 15 attacks and counterattacks for control of a small prominence at the Union’s extreme left. At the end of the day, the positions of the Armies had not changed.

On day 3, the last day, Lee came up the middle. 13,000 Confederate soldiers came across 1¼ miles of open field, to attack the Union Center at a position between a small copse of trees and a corner in stone fence called the angle. Cannon fire from their left, right and center tore them apart as they pressed on. A battered remnant actually penetrated Union lines: the “high water mark” of the Confederacy. It’s anyone’s guess what would have happened, had 4,000 Confederate cavalry smashed into the Union rear at that point, as Lee seems to have intended. But a 23-year-old general named George Armstrong Custer had waded into them with his 450 Union cavalry, routing the much larger force and very possibly changing history.

Lee withdrew in the rain of the 4th, ending the largest battle of the civil war. Lincoln was convinced that the time had come to destroy the Army of Northern Virginia, but Meade and his battered army did not follow. Lee and his army slipped back across the line and returned to Confederate territory. The most lethal war in American history would continue for two more years.

Years earlier, then-Secretary of War Jefferson Davis had brought some 75 camels into West Texas, to try them out as pack animals. Davis’ camel experiment had been a flop, but the King of Siam, (now Thailand), didn’t know that. Seeing the military advantage to the Confederacy, the King wrote to President Abraham Lincoln, proposing to send elephants to help the Union war effort. This “animal arms race” appears to have gotten no further than the King’s letter to Lincoln but, the imagination runs wild, at the idea of War Elephants, at Gettysburg.