Article III, Section 1 of the United States Constitution creates the highest court in the land. The relevant clause states that “The judicial power of the United States, shall be vested in one Supreme Court, and in such inferior courts as the Congress may from time to time ordain and establish”. Nowhere does the document specify the number of justices.

Article III, Section 1 of the United States Constitution creates the highest court in the land. The relevant clause states that “The judicial power of the United States, shall be vested in one Supreme Court, and in such inferior courts as the Congress may from time to time ordain and establish”. Nowhere does the document specify the number of justices. 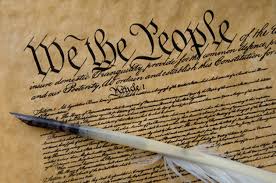 The United States was in the midst of the “Great Depression” when President Franklin Delano Roosevelt came to office in 1932. He had promised a “New Deal” for America, immediately beginning a series of sweeping legislative reforms designed to counter the devastating effects of the Depression. His initiatives faced many challenges in the courts, with the Supreme Court striking down as unconstitutional several New Deal provisions in his first term.

The Supreme Court was divided along ideological lines in 1937, as it is today. “Judicial

Realist” or “Liberal” legal scholars and judges argued that the constitution was a “living document”, allowing for judicial flexibility and legislative experimentation. Supreme Court justice Oliver Wendell Holmes, Jr., a leading proponent of the Realist philosophy, said of Missouri v. Holland that the “case before us must be considered in the light of our whole experience and not merely in that of what was said a hundred years ago”.

“Judicial Formalists”, today we call them “Conservatives” or “Originalists”, seek to discover the original meaning or intent of the constitution. Formalist legal scholars and judges argue that the judiciary is not supposed to create, amend or repeal law; that is for the legislative branch. The role of the court is to interpret and uphold law, or strike them down in light of the original intent of the framers, and the ratifiers, of the constitution.

In 1937, SCOTUS was divided along ideological lines, with three Liberals, four Conservatives, and two swing votes.

President Woodrow Wilson’s Attorney General, James Clark McReynolds, made a proposal in 1914 that: “(When) any judge of a federal court below the Supreme Court fails to avail himself of the privilege of retiring now granted by law (at age 70), that the President be required, with the advice and consent of the Senate, to appoint another judge, who would preside over the affairs of the court and have precedence over the older one. This will insure at all times the presence of a judge sufficiently active to discharge promptly and adequately the duties of the court”.

To Roosevelt, that was the answer. The age 70 provision allowed him 6 more handpicked justices, effectively ending Supreme Court opposition to his policies.

Roosevelt’s “Judiciary Reorganization Bill of 1937” immediately came under sharp criticism from legislators, bar associations, and the public. The Senate Judiciary Committee began hearings on the bill on March 10, 1937, reporting it “adversely” by a committee vote of 10 to 8. The full senate took up the matter on July 2, with the Roosevelt administration suffering a disastrous setback when Senate Majority Leader Joseph T. Robinson, a powerful supporter of the legislation, died of a heart attack.

The full Senate voted on July 22, 1937, to send the bill back to the Judiciary Committee, where provisions for additional justices were stripped from the bill. A modified version passed in August, but Roosevelt’s “court packing” scheme was dead.

In the end, the President had the last word. After an unprecedented four terms, Roosevelt would eventually appoint eight of nine justices to the Court.