The Continental Congress established the ‘American Continental Army’ on June 14, 1775, authorizing 10 companies of ‘expert riflemen,’ to serve as light infantry in the siege of Boston.

On May 10, 1775, twelve colonies convened the second Continental Congress in Philadelphia, Pennsylvania.  One colony was absent at the time, Georgia would come later, arriving on July 20 following their own Provincial Congress.

The Revolution had begun in April that year, with the battles of Lexington and Concord.  A primary focus of the Second Continental Congress was to manage the war effort.

The fledgling United States had no Army at this time, relying instead on ad hoc militia units organized by the colonies themselves. At this time there were approximately 22,000 such troops surrounding British forces occupying Boston, with another 5,000 or so in New York.

The Continental Congress established the ‘American Continental Army’ on June 14, 1775, authorizing 10 companies of ‘expert riflemen,’ to serve as light infantry in the siege of Boston. The next day the Congress unanimously selected George Washington to be General and Commander in Chief of all continental forces.

The formation of other branches of the Armed Forces was quick to follow. The first organized merchant marine action had taken place two days earlier on June 12, 1775, when a group of Machias Maine citizens boarded and captured the schooner British warship HMS Margaretta.

The Navy was formed later that year, in October 1775, the Marine Corps in November. 18th century revenue cutter and rescue operations led to the formation of the United States Coast Guard in January 1915.  The Air Force spun off of the Army Air Corps in September 1947.

Speaking on Armed Services Day in 1953, President Dwight David Eisenhower said: “It is fitting and proper that we devote one day each year to paying special tribute to those whose constancy and courage constitute one of the bulwarks guarding the freedom of this nation and the peace of the free world.” 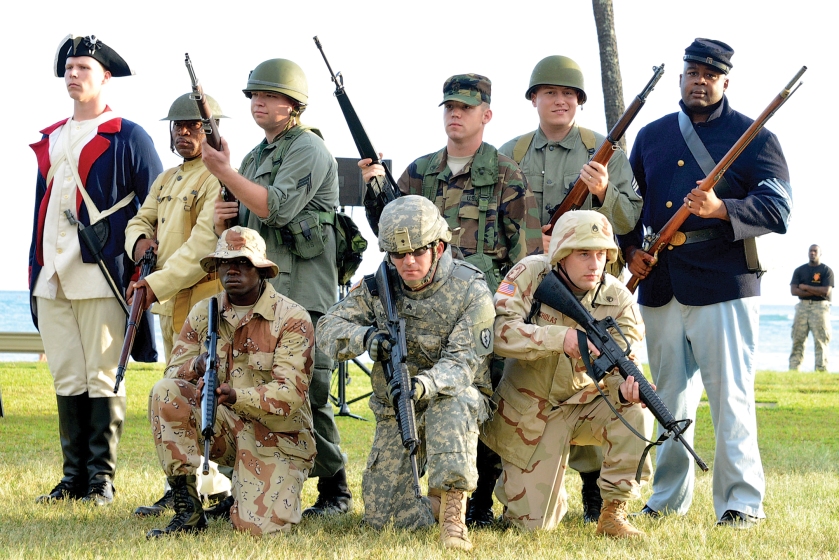