A rumor began to spread among the crowd that there wasn’t enough beer or pretzels to go around. At that point the police force of 1,800 wasn’t enough to maintain order

Nicholas II was crowned Czar of Russia on May 26, 1896, according to the Gregorian calendar. It was traditional to hold a celebration banquet, and the date was set for May 30 at Khodynka Field.

It was customary to give gifts to the guests of such a celebration.  In this case everyone was to receive a bread roll, a piece of sausage, pretzels, gingerbread, and a cup of beer.  150 buffets and 20 pubs were built for their distribution. 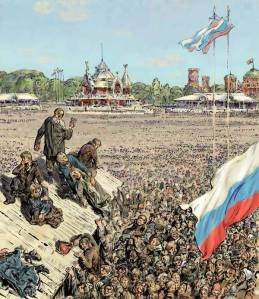 People began to gather on the 29th.  By 5:00am on the 30th, the crowd was estimated at half a million. A rumor began to spread among the crowd that there wasn’t enough beer or pretzels to go around.  At that point the police force of 1,800 wasn’t enough to maintain order. The crush of the crowd and the resulting panic resulted in a human stampede.  Before it was over 1,389 people were trampled to death, and another 1,300 injured.

The new Czar and his wife didn’t hear about it right away.  When they did, the pair spent the rest of that day visiting people hospitalized by the stampede. Nicholas thought it best not to attend a ball put on that night by the French embassy, fearing that it would make him appear insensitive to the suffering of his subjects. His advisers persuaded him to go, however, and later events seem to prove that the Czar was correct. There was great public indignation over the event in Russia, despite generous subsidies paid to the victims by the Russian government.

Mystics prophesied that Nicholas’ refusal to decline the invitation would lead to his doom.  J. Balmont wrote in 1905 that “Who started his reign with Khodynka, will finish it by mounting the scaffold”.

On July 17, 1918, communist forces under Vladimir Ilyich Ulyanov, better known as “Lenin”, assassinated Czar Nicholas along with his wife and children, in Yekaterinburg. It was the end of the Romanov Dynasty, the end of Czarist Russia.  The number of citizens murdered by the totalitarian system of government which took its place, has been estimated as high as sixty million.