In 2003, author Richard Rubin set out to interview the last surviving veterans of WW1. The people he sought were over 101, one was 113 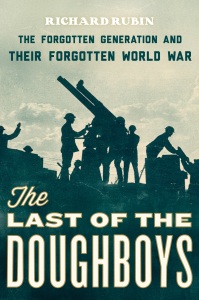 In 2003, author Richard Rubin set out to interview the last surviving veterans of World War One. The people he sought were over 101, one was 113.

It could not have been easy, beginning with the phone call to next of kin. There is no delicate way to ask the question, “Is he still with us?” Invariably, the answer was “no”.

Sometimes, the answer was “yes”, and Rubin would ask for an interview. The memories these people sought to bring back were 80 years old and more, and some spoke only sparingly.  Others were fountains of information, speaking as clearly as if their memories were from yesterday.

Rubin writes “Quite a few of them told me that they were telling me things that they hadn’t talked about in 50, 60, 70 years. I asked a few of them why not, and the surprising response often was that nobody had asked.”

Anthony Pierro of Swampscott, Massachusetts, served in Battery E of the 320th Field Artillery, and fought in several major battles of 1918, including Oise-Aisne, St. Mihiel, and Meuse-Argonne.  Pierro recalled his time in Bordeaux, as the best time of the war. “The girls used to say, ‘upstairs, two dollars.'” His nephew Rick interrupted the interview. “But you didn’t go upstairs.”  Uncle Anthony’s response was classic.  “I didn’t have the two dollars”.

They’re not all men, either. 107-year-old Hildegarde Schan of Plymouth, Massachusetts talks about taking care of the wounded in the post-war years.

Howard Ramsey started the new burial ground in France that we now know as the Meuse-Argonne American Cemetery. “So I remember one night”, he said, “It was cold, and we had no blankets, or nothing like that. We had to sleep, we slept in the cemetery, because we could sleep between the two graves, and keep the wind off of us, see?”

There was J. Laurence Moffitt of Orleans, Massachusetts. Today, we see the “Yankee Division” on highway signs. At 106, this man was the last surviving member of his generation, with a memory so clear that he could recall every number from every fighting unit of the 26th Division.

George Briant was caught in an open field with his battery, with German planes dropping bombs on them.  He thinks he was hit by every one of them.  After several months in the hospital, he begged to go back to the front.  On the last night of the war, November 10, 1918, Briant came upon the bodies of several men who had just been shelled.   “Such fine, handsome, healthy young men”, he said, “to be killed on the last night of the war.  I cried for their parents. I mean it’s a terrible, terrible thing to lose anyone you love in a war, but imagine knowing precisely when that war ends, and then knowing that your loved one died just hours before that moment.”

In all, Rubin interviewed dozens of these men, and a handful of women. Their stories can be found on their own You Tube channel, https://www.youtube.com/user/LastOfTheDoughboys. I highly recommend it.  Their words are far more powerful than anything I could write about them. 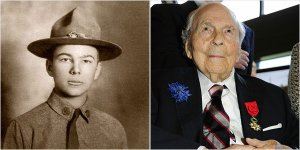 Frank Woodruff Buckles, born Wood Buckles, is one of them. Born on this day in 1901, Buckles joined the Ambulance Corps of the American Expeditionary Force (AEF) at the age of 16. He never saw combat against the Germans, but he would escort 650 of them back home as prisoners.

Buckles was a civilian in 1940, working for the White Star Lines and the WR Grace shipping companies. His work took him to Manila, in the Philippines, where he remained after the outbreak of WWII. Buckles was helping to resupply U.S. troops when he was captured by Japanese forces in January 1942, spending the next three years and two months as a civilian prisoner in the Santo Tomas and Los Baños prison camps.

Corporal Frank Buckles passed away on February 27, 2011 at the age of 110, and was buried in Arlington National Cemetery, the President of the United States in attendance. The Last of the Doughboys, the last American veteran of WWI, was gone. The last living memory of the war to end all wars.