Though the Japanese government held considerable animosity for that of the United States, the people of Japan seemed a different story

USS Panay was a flat bottomed river craft, built in Shanghai as part of the Asiatic fleet and charged with protecting American lives and property on the Yangtze River, near Nanking.

Japanese forces invaded China in the summer of 1937, advancing on Nanking while American citizens evacuated the city.  The last ones boarded Panay on December 11:  five officers, 54 enlisted men, four US embassy staff, and 10 civilians.

Japanese air forces received word the morning of December 12, 1937, that Chinese forces were being evacuated on several large steamers and a number of junks, about 12 miles north of the city.

Anchored a short way upstream along with several Chinese oil tankers, Panay came under bombing and strafing attack that morning, sinking mid-river with three men killed.  43 sailors and five civilians, were wounded.  Two newsreel cameramen were on board at the time of the attack, and were able to film part of it.

The American ambassador to Japan at the time was Joseph C. Grew, a man who was more 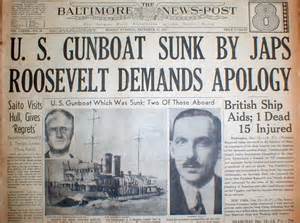 than old enough to remember how the sinking of the Maine in Havana Harbor brought the US into war with Spain in 1898.  Grew hoped to avoid a similar outcome following the Panay sinking, though Japanese authorities were less than helpful.  US cryptographers uncovered information shortly after the attack indicating that aircraft were operating under orders, while the Japanese government continued to insist that the attack had been accidental.

The matter was officially settled four months later, with an official apology and an indemnity of $2,214,007.36 paid to the US government.  The “accidental attack” narrative appears to have been a safe story both sides pretended to accept, but it seems a little hard to believe.   HMS Ladybird had been fired on that same morning by Japanese shore batteries, and the attack was followed a month later by the “Allison incident”, in which the American consul in Nanking, John M. Allison, was struck in the face by a Japanese soldier.

Added to the fact that American property was being looted by Japanese forces, it seems clear that relations between the two governments were poisonous at the time.

Interestingly, though the Japanese government held considerable animosity for that of the United States, the people of Japan seemed a different story.  Ambassador Grew was flooded with expressions of sympathy from Japanese citizens, who apologized for their government and expressed affection for the United States.

They came from citizens of all ages and walks of life, from doctors and professors to school children.  The wives of high ranking Japanese officials apologized to Grew’s wife without their husbands’ knowledge, while ten Japanese men describing themselves as retired US Navy sailors living in Yokohama, sent a check for $87.19.

A typical letter read: “Dear Friend! This is a short letter, but we want to tell you how sorry we are for the mistake our airplane made. We want you to forgive us I am little and do not understand very well, but I know they did not mean it. I feel so sorry for those who were hurt and killed. I am studying here at St. Margarets school which was built by many American friends. I am studying English. But I am only thirteen and cannot write very well. All my school-mates are sorry like myself and wish you to forgive our country. To-morrow is X-Mas, May it be merry, I hope the time will come when everybody can be friends. I wish you a Happy New Year. Good-bye.”

The two governments never did patch things up.  The US placed an embargo in September 1940, prohibiting exports of steel, scrap iron, and aviation fuel to Japan, in retaliation for their occupation of northern French Indochina:  modern day Laos, Cambodia and Vietnam.

Japan occupied southern Indochina by the summer of 1941, as the US, Great Britain, and the Netherlands retaliated by freezing Japanese assets.

Throughout that summer and fall, Japan tried to negotiate a settlement to lift the embargo on terms allowing them to keep their newly captured territory, while at the same time preparing for war.  General Hideki Tojo, future Prime Minister, secretly set November 29 as the last day on which Japan would accept a settlement without war.

Air and naval forces of the Imperial Japanese government attacked the US naval anchorage at Pearl Harbor, about a week later.