The American medic, knowing he had to convey the intent of the message, translated as “Du kannst zum Teufel gehen”. You can go to hell.

The largest German offensive of the western front burst out of the frozen Ardennes forest on December 16, 1944, aiming to drive a wedge between British and American forces, and to capture the Belgian port of Antwerp, vital to the German’s ability to re-supply. It was called “Unternehmen Wacht am Rhein”, “Operation Watch on the Rhine”.

The tactical surprise was complete, allied forces driven back through the densely forested regions of France, Belgium and Luxembourg. Wartime news maps showed a great inward “bulge” in the lines, and the name stuck. The Battle of the Bulge was the largest and bloodiest battle fought by the US in WWII, fought in the harshest winter conditions in recorded history and involving 610,000+ Americans.

The seven roads leading to Antwerp converged in Bastogne, in what the Germans called “Straße Oktopus”, “Road Octopus”. The town was strategically indispensable to the German drive on Antwerp, and all or parts of 7 German armored divisions converged on the place. Over 54,000 men. The Allies understood the importance of the place as well as the Germans, and General Eisenhower dispatched the 101st Airborne Division to hold the town at all costs. 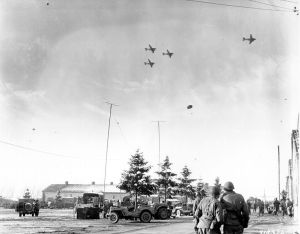 For two days, a desperate defense of the nearby villages of Noville and Foy held back the 2nd Panzerdivision, as 11,000 men and 800 officers of the 101st joined a combined force of 11,000 converging on Bastogne. By the 21st, Bastogne’s field hospital was overrun, they were surrounded by forces outnumbering them 2½ to one. Poorly supplied for the cold winter conditions with air supply made all but impossible by weather conditions, the citizens of Bastogne gave their blankets to the American soldiers, along with white linens which they used for camouflage.

On the morning of December 22, 1944, two German officers appeared at the American perimeter along with two enlisted men, carrying a white flag. They were a Major Wagner of the 47th Panzer Corps, and Lt. Hellmuth Henke of the Panzer Lehr Operations Section. They carried a note from German General Luttwitz, 165 words in all, and reading in part: “To the U.S.A. Commander of the encircled town of Bastogne. There is only one possibility to save the encircled U.S.A. troops from total annihilation: that is the honorable surrender of the encircled town. In order to think it over a term of two hours will be granted beginning with the presentation of this note”.

The note worked its way up the chain of command to the acting Division Commander, General Tony McAuliffe. Told that there was a surrender ultimatum, McAuliffe first thought that it was the Germans who wanted to surrender. Soon disabused of that notion, he laughed and said: “Us surrender? Aw, nuts!”

Knowing that he had to reply, McAuliffe said “Well I don’t know what to tell them.” Lt. General Harry Kinnard spoke up, saying, “That first remark of yours would be hard to beat”. McAuliffe said, “What do you mean?” and Kinnard replied “Sir, you said ‘Nuts’.” They all agreed, and McAuliffe wrote his reply. “To the German Commander, “Nuts!” The American Commander.”

Joseph H. “Bud” Harper was the American army officer who delivered the reply, with medic Ernie Premetz acting as translator.

Confused by the American slang, Henke asked “What does that mean?” Harper said to Premetz “You can tell them to take a flying shit.” The medic, knowing he had to convey the intent of the message, translated as “Du kannst zum Teufel gehen”. You can go to hell. Harper then said, “If you continue to attack, we will kill every goddamn German that tries to break into this city.” Henke replied, “We will kill many Americans. This is war.” Harper then said, “On your way Bud, and good luck to you.”

Years later, Harper would say that he always regretted wishing them luck.

By the end of January, the last great effort of German armed forces had been spent and driven back beyond their original lines. An official report by the US Army on the Battle of the Bulge lists 108,347 casualties, including 19,246 killed, 62,489 wounded and 26,612 captured and missing. Those numbers could have been far worse, if not for what newspapers would soon call the “Battered Bastards of Bastogne”.

Augusta Marie Chiwy (“Shee-wee”) was the bi-racial daughter of a Belgian veterinarian and a Congolese mother she never knew.  Thinking it safe to visit her father in Bastogne that Christmas, Chiwy found herself, like everyone else in that place, surrounded.  A trained nurse, Chiwy spent the 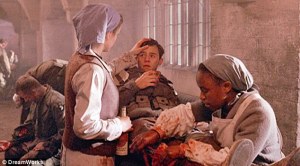 entire siege tending to the wounded, along with Dr. Jack Prior.  Once, she even ran through enemy fire to collect the wounded from the field.  On Christmas eve, she was blown off her feet and through a wall. She got up and went back to it, despite the direct hit that killed 30 American wounded, along with the only other nurse at the Rue Neufchatel aid station, Renée Lemaire.

A Black nurse called “Anna” briefly appeared in Historian Stephen Ambrose’ ‘A Band of Brothers’, and on the HBO series based on the book.  But who was Anna?  Was she a myth?  British military historian Martin King discovered her in a nursing home, 61 years after the encirclement at

Bastogne.  Chiwy married after the war, and rarely talked about her experience in Bastogne.  It took King a full 18 months to coax the story out of her.  The result was the 2015 Emmy award winning historical documentary, “Searching for Augusta, The Forgotten Angel of Bastogne”.

In 2011, she was awarded a Knighthood in the Order of the Crown in the name of King Albert II of Belgium.  The United States Army awarded her the Civilian Award for Humanitarian Service, presented by the U.S. Ambassador to Belgium.  Augusta Chiwy died on August 23, 2015, near Brussels.