Imagine an army of circus riders, equipped with composite bows and a minimum of 60 arrows apiece, each capable of hitting a bird in flight

The Eurasian Steppe is a vast region of grasslands and savannas, extending thousands of miles east from the mouth of the Danube, almost to the Pacific Ocean. There’s no clearly defined southern boundary, as the land becomes increasingly dry as you move south. To the north are the impenetrable forests of Russia and Siberia.
The 12th century steppe was a land of inter-tribal rivalry, immersed in a poverty so profound that many of its inhabitants went about clad in the skins of field mice. Ongoing acts of warfare and revenge were carried out between a kaleidoscope of ever changing tribal confederations, compounded and egged on by interference from foreign powers such as the Chinese dynasties to the south.
Into this land was born the son of the Mongol chieftain Yesügei, born with a blood clot grasped in his fist. It was a sign, they said, that he was destined to become a great leader. By 1197 the boy would unite the nomadic tribes of northeast Asia into the largest contiguous empire in history, extending from Korea in the east, through Baghdad and Syria all the way into eastern Europe. His name was Temujin. He is known to history as the Great Leader of the Mongol Empire, Genghis Khan. 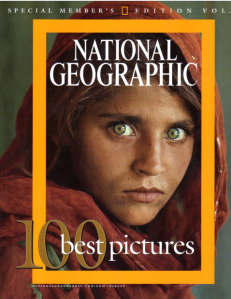 The Steppes have long been a genetic crossroad, the physical features of its inhabitants as diverse as any in the world. The word “Rus”, from which we get Russia, was the name given to Viking invaders from earlier centuries. History does not record what Genghis himself looked like, though he’s often depicted with Asian features. There is evidence suggesting he had red hair and green eyes. Think of that beautiful young Afghan girl, the one with those killer eyes on that National Geographic cover, a few years back.
The Mongols called themselves “Tata”, while others called them after the people of Tartarus, the Hell of Roman mythology. They were the “Tatars” to the people they terrorized: “Demons from Hell”.
The two most prominent weapons in the Mongol arsenal can be found in the words “Horse Archer”. Imagine an army of circus riders, equipped with composite bows and a minimum of 60 arrows apiece, each capable of hitting a bird in flight. They have no fewer than 3-4 small, fast horses apiece, and are able to transfer mounts in mid-gallop in order to keep their horses fresh. In this way, riders could cover 100 miles and more in a day. Stirrups allowed them to fire in any direction, including backward. The bow, a laminated composite of wood, horn and sinew, combined the compression of the interior horn lamina with stretching animal sinews glued to the exterior. The weapon was capable of aimed shots at five times the length of a football field. Ballistic shots into large groups were common as far as 2½ times that distance. The average draw of an English longbow is 70-80 lbs. The Mongol composite bow ranged from 100 to 160 lbs.
After the death of Genghis’ eldest son Jochi, who pre-deceased his father, the Great Khan installed his grandson Batu as Chief of state (Khan) of the Kipchak Khanate to the north. In 1235, the Great Khan Ögedei, who had succeeded his father on Genghis’ death in 1229, ordered his nephew Batu and an army of 130,000 circus riders to conquer Europe, beginning with the Rus.
13th century Russia was more a collection of principalities than it was a single nation. One by one they fell to the army of Batu, known as the “Golden Horde”. Ryazan, Kolomna and Moscow. Vladimir, Rostov, Uglich, Yaroslavl, and a dozen others. Some of the names are familiar today, others were extinguished for all time. All fell to the Golden Horde.     Smolensk alone escaped, having agreed to submit and pay tribute. The city of Kitezh, as the story goes, submerged itself into a lake along with its inhabitants, at the approach of the Horde. It was this day, December 6, 1240, when Mongols under Batu Khan occupied & destroyed Kiev after several days’ struggle.
The violence of the age was so vast and horrific that it’s hard to get your head around. WWII, the deadliest conflict in human history, was a time of industrialized mass slaughter from the battlefields to the death camps. WWII ended the lives of roughly 3% of the inhabitants of earth, 40 to 72 million souls dead in a few short years. By comparison, the Mongol conquests killed 30 million over 162 years, mostly one by one by edged or pointed weapons. When it was over, 17% of the entire world’s population, had vanished.
By the end of 1241, Mongol armies had crushed opposing forces from the Plains of 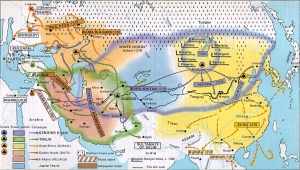 Hungary, to parts of Austria, to Eastern Persia.   Plans were being laid for the invasion of Germany, Austria and Italy in December, 1241, when news arrived informing them of the death of the Great Khan. Ögedei and Batu wanted to continue, but the Law of Yassa required that all Princes of the Blood return to Karakorum and the Kurultai, the meeting of Mongol Chieftains.
The Celtic warrior Calgacus once said of the Roman conquests that “They make a desert, and they call it peace”. It was likewise for the Mongol Empire; a time of peace for those who would submit and pay tribute. A time when “A maiden bearing a nugget of gold on her head could wander safely throughout the realm.” This “Pax Mongolica” lasted through the reign of the Great Khan and his several successors, making way for the travels of Marco Polo. The 4,000 mile long “Spice Roads”, the overland trade routes between Europe and China, flourished throughout the 14th and 15th centuries, entirely under Mongol control. The “Black Death” of the 14th century would begin to change that. 100 years later, the fall of Byzantium and marauding bands of   Muslim brigands were making the east-west overland trade routes increasingly dangerous. In 1492, the Spanish Crown hired an Italian explorer to find a water route to the east.
The Mongols would never regain the lost high ground of December 1241, as they fell to squabbling over bloodlines. Berke, grandson of Ghenghis and brother of Batu, converted to Islam, creating a permanent division among the descendants of the Great Khan. Timur-i-leng, “Timur the Lame”, or “Tamerlane”, professed to be a good Muslim, but had no qualms about destroying the capitals of Islamic learning of his day. Damascus, Khiva, Baghdad and more, have never entirely recovered. Best known for the pyramids of skulls left behind, as many as 19 million fell to Tamerlane’s murderous regime.
The Golden Horde ruled over parts of Russia until the time of Ivan IV “Grozny” (The Terrible) in the 1550s.
The Mongol hordes never went away, not entirely. Modern DNA testing reveals that up to 8% of certain populations across the Asian subcontinent, about .5% of the world’s population, descends directly from that baby holding the blood clot, Genghis Khan.