In New York city and state alike, economic ties with the south ran deep. 40¢ of every dollar paid for southern cotton stayed in New York in the form of insurance, shipping, warehouse fees and profits. 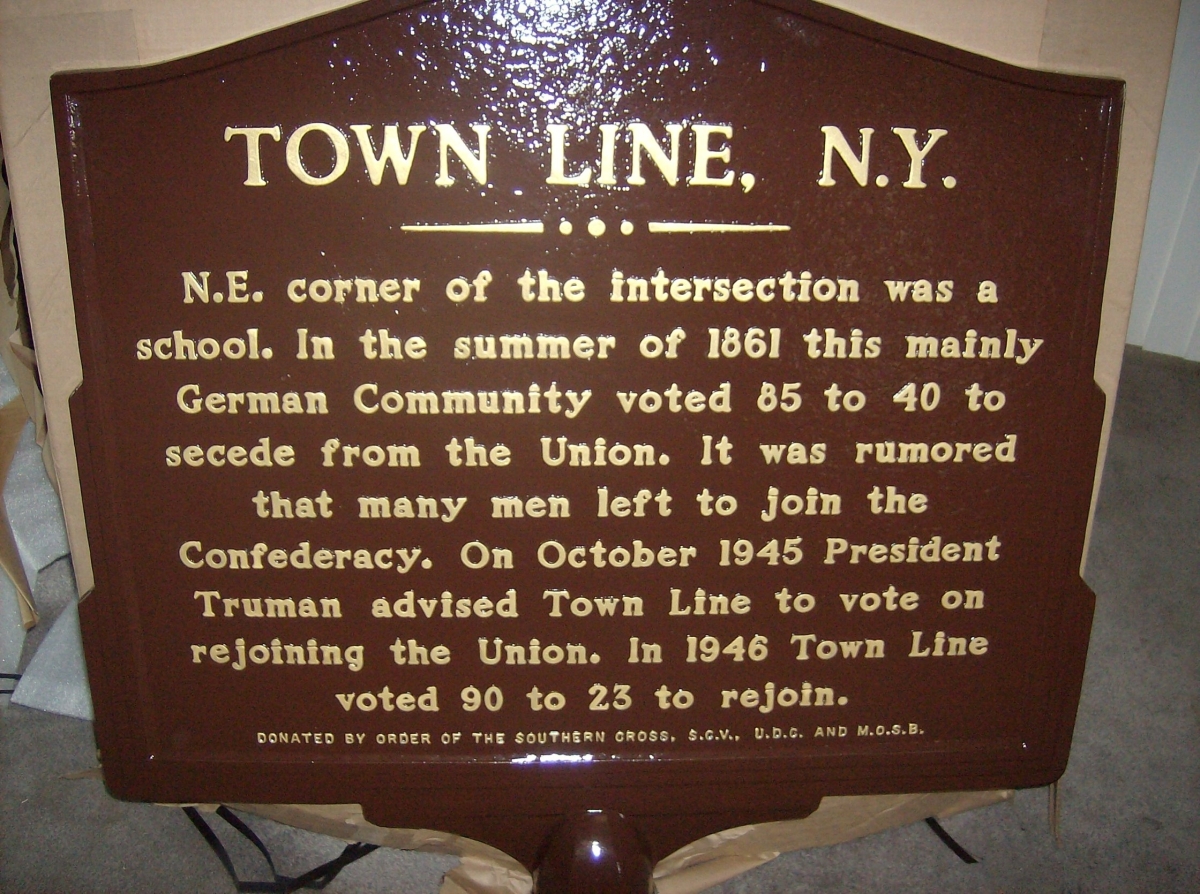 By the early 1830s, cotton exceeded the value of all other American exports, combined. As secession loomed over the nation, one Chicago Daily Times editorial warned that if the South departed “in one single blow, our foreign commerce must be reduced to less than one half of what it is now”.

Fun Fact: South Carolina seceded in December 1860, and the world waited to see who’d follow.  New York City became the next to call for secession on January 6, when Mayor Fernando Wood addressed that city’s governing body.  “When Disunion has become a fixed and certain fact”, he cried, “why may not New York disrupt the bands which bind her to a venal and corrupt master…and destroyed the Confederacy of which she was the proud Empire City?”

In New York city and state alike, economic ties with the south ran deep.  40¢ of every dollar paid for southern cotton stayed in New York in the form of insurance, shipping, warehouse fees and profits.

30 minutes’ east of Buffalo, the village of Lancaster contemplated staying with the Union.  500 miles from the nearest Confederate state, George Huber remembered the time.  “When war was declared, Lancaster seethed with the news, and many were the nights we stayed up as late as 12 o’clock to talk things out.  I was twelve years old at the time, but I remember the stern faces of the elders and the storm of passionate and angry discussion. Soon the town split into two factions, it was a very tense situation…Often the excitement ran so high that if a man in either group had made the slightest sign, neighbors would have been at each other’s throats and fists would have taken the place of words.”

“Town Line”, a hamlet on the village’s eastern boundary, put the matter to a vote.  In the fall of 1861, residents gathered in the old schoolhouse-turned blacksmith’s shop.  By a vote of 85 to 40, Town Line voted to secede from the Union.

As casualty reports came back from the front there was angry talk of arresting “Copperheads” for sedition.  “Seceders” grew quiet, afraid to meet in public places amidst angry talk of lynching.  A half-dozen or so of the more ardent secessionists actually went south to fight for the Confederacy.  Others quietly moved north, to Canada.   Outside of Lancaster, no one seemed to notice.  Taxes continued to be paid. No federal force ever arrived to enforce the loyalty of the small village.

A rumor went around in 1864, that a large Confederate army was building in Canada, poised to invade from the north.  Town Line became a dangerous place for the few southern sympathizers left.  Most of those remaining moved to Canada and, once again, Lancaster became the quiet little village in upstate New York, that nobody ever heard of.

Impatient to get on with it, Dade County Georgia “symbolically” seceded both from the state as well as the Union, back in 1860.  Officially, Dade County seceded with Georgia in 1861, and rejoined with the rest of the state in 1870, but the deal was sealed on July 4, 1945 when a telegram from President Harry S. Truman was read at a celebration marking Dade County’s “rejoining” the Union.

By October 1945 there legally remained only one part of the former Confederate States of America. The little hamlet of Town Line, New York.

On October 7, 1945 there arrived a note by courier express.  “There are few controversies that are not susceptible to a peace time resolution” read the note, “if examined in an atmosphere of tranquility and calm rather than strife and turmoil. I would suggest the possibility of roast veal as a vehicle of peace.  Why don’t you run down the fattest calf in Erie County, barbecue it and serve it with fixin’s in the old blacksmith shop where the ruckus started? Who can tell? The dissidents might decide to resume citizenship.”  The note was signed “Very Sincerely Yours, Harry Truman”.

Fireman’s Hall became the site of the barbecue, as “the old blacksmith shop where the ruckus started” was too small for the assembled crowd.  On October 28, 1945 residents adopted a resolution suspending the 1861 ordinance of secession by a vote of 90-23. The Stars and Bars of the Confederate States of America was lowered for the last time, outside the old blacksmith shop.

Alabama member of the United States House of Representatives John Jackson Sparkman, may have had the last word:  “As one reconstructed rebel to another, let me say that I find much comfort in the fact that you good people so far up in Yankee land have held out during the years. However, I suppose we grow soft as we grow older.”