Warm and dry in our rooms we can only wonder what went through the minds, of those lowering the lifeboats. Among them was Thomas Millar who must have wondered why. He had wanted to give little Tommy and Ruddock, a better life. He was about to leave his sons, orphans. 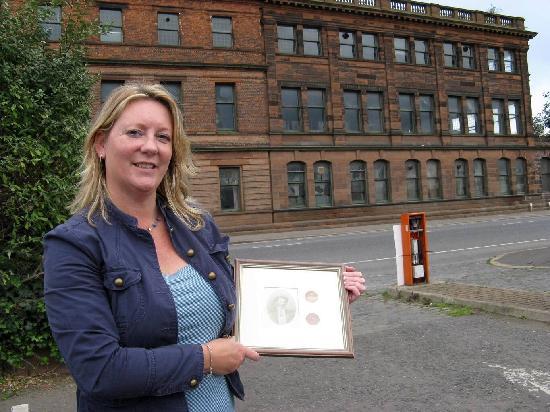 The great ship left the port of Southampton, England on April 10, 1912, narrowly averting an accident only minutes into her maiden voyage.

The largest liner in the world at this time, the bow wave of the RMS Titanic lifted the liners SS City of New York and Oceanic at their moorings.  Dropping into the trough, New York’s mooring cables snapped with a sound like a rifle shot as the vessel swung about, stern-first. The crew of the tugboat Vulcan struggled frantically to bring New York under tow as Titanic’s Captain Edward Smith ordered starboard engines hard astern. Collision was averted, by a scant four feet.

The idea for this largest of all luxury liners came about in 1907, construction beginning on March 31, 1909 at the Harland and Wolff shipyards of Belfast, Ireland.

In its prime Harland and Wolff was the largest shipyard in the world with some 40,000 workmen tramping to work across the cobblestone paved streets, of Belfast.

Thomas Millar was one of those workers. The son of a sailor Millar grew up in the shadow of the great vessels of northern Ireland and all but destined, for the shipbuilding industry. First came the apprenticeship with Harland & Wolff and later work at Vickers of Barrow, Workman, Clark & Co. of Belfast before returning to work, at Harland & Wolff.

Millar took pride in his work, assigned to help build the great engines of RMS Titanic and proud to take some small part in the technological wonder, of the age. At night Millar would tell the boys about his work, wanting to instill in them the same pride he felt, in seeing the great liner take form.

Disaster struck the family in January 1912 when Jennie died suddenly, of tuberculosis. With work now nearing completion on Titanic, the grieving father thought about a fresh start. He would improve his lot and that of his small family. So it was he left the dockyards to work, for the White Star Line. He would get himself settled and, when the time was right, he would reunite with his boys to pursue their new life. In America.

Thomas accepted work as assistant deck engineer for the White Star Line responsible for the upkeep of cranes, davits and the like. As things turned out he was assigned to the maiden voyage of the vessel he had helped to build. RMS Titanic.

With 16 transverse bulkheads Titanic could survive the breach, of as many as four. Shipbuilder Magazine dubbed the vessel “unsinkable”. The name was never officially sanctioned by her builders, but no matter. From that day, to this the name lives on, in the public imagination.

At last came the day. Time to leave. The work would be constant, and Thomas knew this was no place for children. He left the boys with his aunt Mary bidding the two, goodbye. “Be good to your aunt” he told the boys, “and try not to fight with your cousins”. He reached in his pocket and pulled out two new pennies. “Don’t spend these” he told his sons, “until we’re together again”.

Later that day the boys stood on the shores of Belfast Loch watching the liner, steam away. So tightly did each grip his penny the date imprinted into the palm of his small hand. 1912.

The story from here, is familiar. On Sunday April 14, Titanic was 400 miles off the coast of Newfoundland. Conditions were clear, calm and cold, just a few degrees above freezing. There had been warnings of drifting ice from other ships in the area, but no ice was believed to pose a danger, to such a ship as Titanic. Captain Smith said it himself, that he “[couldn’t] imagine any condition which would cause a ship to founder. Modern shipbuilding has gone beyond that.”

Lookout Frederick Fleet alerted the bridge. Iceberg dead ahead at 11:40pm. First Officer William Murdoch ordered the engines in reverse, veering the ship to port. Lookouts were relieved, thinking that collision was averted. Below the surface, the starboard side ground into the iceberg, opening a gash the length of a football field.

The ship was built to survive flooding in four watertight compartments. The iceberg had opened five. As Titanic began to lower at the bow, it soon became clear. The great ship was doomed.

Those aboard were poorly prepared for such an emergency. The vessel was built for 64 wooden lifeboats but only carried, 16. Based as they were on ship size and not the number of passengers and crew, regulations required enough for 990. Titanic carried enough for 1,178.

There was room for over half of those on board, provided that each boat was filled to capacity. And yet, many boats were launched only half-full. Confused and still sleepy in the midnight air many refused the small boats, reluctant to leave the “safety” of the 40,000-ton ship. In other cases so strictly did some adhere to the “women and children first” directive, that evacuation included women and children, only. The first lifeboat in the water, rated at 65 passengers, launched with only 28 aboard. Lifeboat #1 rated for 60, contained 12.

In the hour and ½ it took to lower the lifeboats Titanic’s enormous propellers were visible above the water. Warm and dry in our rooms we can only wonder what went through the minds, of those lowering the lifeboats. Thomas Millawas one of those. Did he wonder in those last hours of his life…why? He had left to seek a better life for little Tommy and Ruddock. He was about to leave them orphans.

1,496 died that night of 2,223 passengers and crew. Mostly from hypothermia. Thomas Millar’s body if it was ever recovered, was never identified. Tommy and Ruddock never did spend those pennies. The coins remain treasured family heirlooms from that day to this. You can still see those two pennies if you like, on the streets of Belfast. There Thomas’ Great-Granddaughter Susie Millar directs “the original & ONLY Titanic themed tour in Belfast guided by the direct descendant of a crew member”. http://www.titanictours-belfast.co.uk/