The job of the Arlington Ladies is to honor, not to grieve, but it doesn’t always work out that way.  Linda Willey of the Air Force Ladies describes the difficulty of burying Pentagon friends after 9/11, while pieces of debris yet littered the cemetery.

The first military burial at Arlington National Cemetery was that of Private William Henry Christman, 67th Pennsylvania Infantry, interred on May 13, 1864. Two more joined Christman that day, the trickle soon turning into a flood. By the end of the war between the states, that number was 17,000 and rising.

In modern times, an average week will see 80 to 100 burials in the 612 acres of Arlington.

Private Arciola joined a quarter-million buried in our nation’s most hallowed ground on March 31. Two hundred or more mourners attended his funeral, a tribute befitting the tragedy of the loss of one so young.

Sixteen others were buried in Arlington that Friday, most considerably older. Some brought only a dozen or so mourners. Others had no friends or family members whatsoever on-hand, to say goodbye.

Save for a volunteer, from the Arlington Ladies.

In 1948, Air Force Chief of Staff General Hoyt Vandenberg and the general’s wife Gladys made a practice of attending military funeral services at Arlington National Cemetery.

Sometimes, a military chaplain was the only one present at these services. Both Vandenbergs felt that a member of the Air Force family should be present at these funerals.  Gladys began to invite other officer’s wives. Over time, a group of women from the Officer’s Wives Club were formed for the purpose.

In 1973, General Creighton Abrams’ wife Julia did the same for the Army forming a group calling themselves “Arlington Ladies”. Groups of Navy and Coast guard wives followed suit, in 1985 and 2006.

Traditionally, the Marine Corps Commandant sends an official representative of the Corps to all Marine funerals.  The Marine Corps Arlington Ladies were formed in 2016.

Arlington Ladies’ Chairman Margaret Mensch explained “We’ve been accused of being professional mourners, but that isn’t true. I fight that perception all the time. What we’re doing is paying homage to Soldiers who have given their lives for our country.” 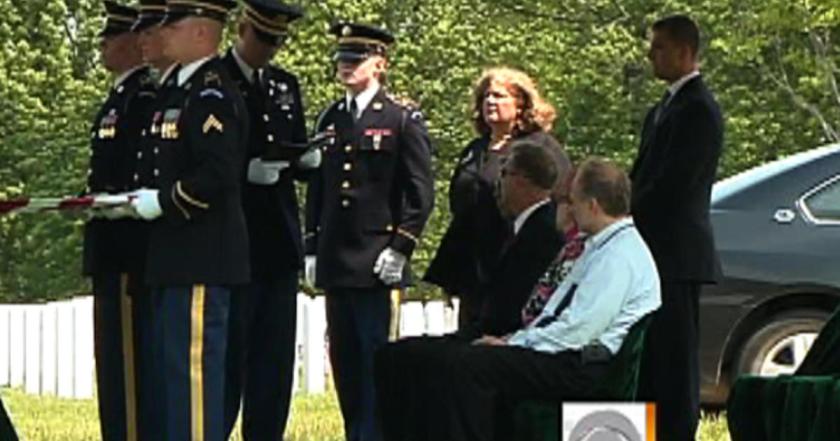 The casual visitor cannot help but being struck with the solemnity of such an occasion. Air Force Ladies’ Chairman Sue Ellen Lansell spoke of one service where the only other guest was “one elderly gentlemen who stood at the curb and would not come to the grave site. He was from the Soldier’s Home in Washington, D. C. One soldier walked up to invite him closer, but he said no, he was not family”.

The organization was traditionally formed of current or former military wives. Today their number includes daughters and even one “Arlington Gentleman”. 46 years ago they came alone, or in pairs. Today, 145 or so volunteers from four military branches are a recognized part of all funeral ceremonies at Arlington National Cemetery, their motto: “No Soldier will ever be buried alone.”

The volunteer arrives with a military escort from the Navy or the United States Army 3rd Infantry Regiment, the “Old Guard”. The horse-drawn caisson arrives from the old post chapel, carrying the flag draped casket. Joining the procession, she will quietly walk to the burial site, her arm inside that of her escort. A few words are spoken over the deceased, followed by the three-volley salute. Off in the distance, a solitary bugler sounds Taps.

The folded flag is presented to the grieving widow, or next of kin. Only then will she break her silence, stepping forward with a word of condolence and two cards: one from the service branch Chief of Staff and his wife and a second, from herself.

Joyce Johnson buried her husband Lieutenant Colonel Dennis Johnson in 2001, a victim of the Islamist terrorist attack on the Pentagon. Johnson remembers the Arlington Ladies’ volunteer as “a touchingly, human presence in a sea of starched uniforms and salutes”. Three years later, Joyce Johnson paid it forward, and became one herself.

Any given funeral may be that of a young military service member killed in service to the nation, or a veteran of Korea or WWII, who spent his last days in the old soldier’s home. It could be a four-star General or a Private. It matters not a whit.

“We’re not professional mourners. We’re here because we’re representing the Air Force family and because, one day, our families are going to be sitting there in that chair”. – Sandra Griffin, Air Force volunteer, Arlington Ladies

Individual volunteers attend about five funerals a day, sometimes as many as eight. As with the Tomb of the Unknown sentinels who hold their vigil heedless of weather, funeral services pay no mind, to weather conditions. The funeral will proceed on the date and time scheduled irrespective of rain, snow or heat. Regardless of weather, an Arlington Lady Will be in attendance.

The job of the Arlington Ladies is to honor, not to grieve, but it doesn’t always work out that way.  Linda Willey of the Air Force Ladies describes the difficulty of burying Pentagon friends after 9/11, while pieces of debris yet littered the cemetery. Paula McKinley of the Navy Ladies still chokes up, over the hug of a ten-year old girl who had just lost both parents. Margaret Mensch speaks of the heartbreak of burying one of her own young escorts after he was killed in Afghanistan, in 2009.

Barbara Benson was herself a soldier, an Army flight nurse during WWII. She is the longest serving Arlington Lady. “I always try to add something personal”, Benson said, “especially for a much older woman. I always ask how long they were married. They like to tell you they were married 50 or 60 years…I don’t know how to say it really, I guess because I identify with Soldiers. That was my life for 31 years, so it just seems like the natural thing to do.”

Elinore Riedel was chairman of the Air Force Ladies during the War in Vietnam, when none of the other military branches had women representatives. “Most of the funerals were for young men,” she said. “I saw little boys running little airplanes over their father’s coffins. It is a gripping thing, and it makes you realize the awful sacrifices people made. Not only those who died, but those left behind.”

Mrs. Reidel is a minister’s daughter, who grew up watching her father serve those in need. “It doesn’t matter whether you know a person or not”, she said, “whether you will ever see them again. It calls upon the best in all of us to respond to someone in deep despair. I call it grace…I honestly feel we all need more grace in our lives.”

Rest In Peace, Dad. You left us too soon.