“Any man who thinks he can be happy and prosperous by letting the government take care of him; better take a closer look at the American Indian”. – Henry Ford 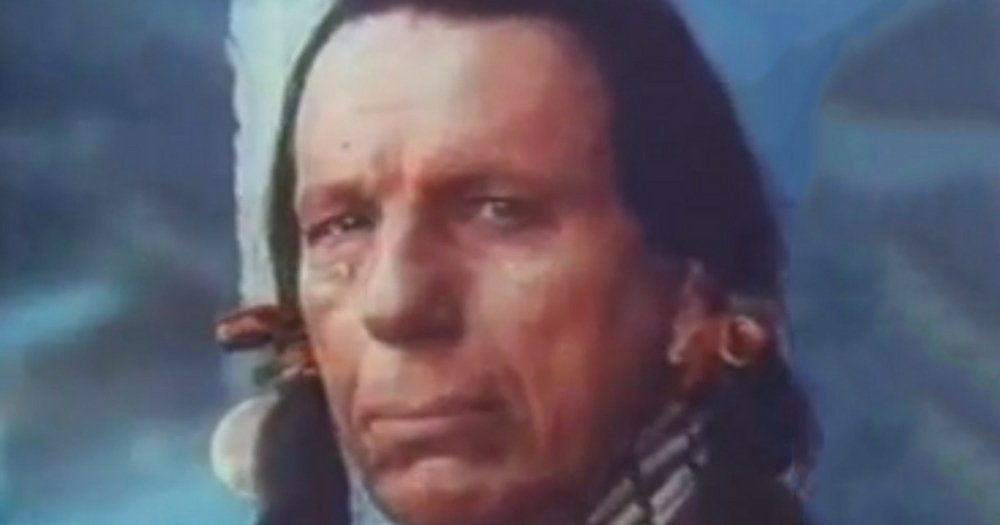 In the motion picture business, the term “silent film” is a retronym, a description coined after the fact to distinguish the genre from “talkies”. The Jazz Singer produced in 1927 was the first feature length picture featuring synchronous recorded music and lip-synchronized singing and speech. Within a decade, widespread production of silent films, had ceased. The era of the modern motion picture, was born.

For Iron Eyes Cody, a career spent in motion pictures reads like a history of the industry itself. This self-described son of a Cherokee father and Cree mother and born with the name “Little Eagle” began a long acting career, in the early 1930s.

“Iron Eyes learned much of his Indian lore in the days when, as a youth, he toured the country with his father, Thomas Long Plume, in a wild west show. During his travels, he taught himself the sign language of other tribes of Indians.”

From future President Ronald Reagan to Bob Hope, there is scarcely anyone prominent in the first half-century of the entertainment industry who didn’t work with “Hollywood’s favorite Native American”. A close personal friend of Walt Disney, Cody appeared in over 100 television programs including many Disney productions. In 1974, Cody appeared on an episode of Mr. Rogers’ Neighborhood, featuring native American dancers. That’s him chanting in the background, on Joni Mitchell’s 1988 song “Lakota” from the album, Chalk Mark in a Rainstorm.

Jay Silverheels, the native American actor who portrayed Tonto in the Lone ranger, used to question Cody’s story. Native American stunt man Running Deer pointed out that something seemed off, Cody’s background didn’t make sense but, no matter. No use getting in the way of a good story.

The period beginning with the Cold War and ending with Woodstock was a time of sea change in American life. Babies weren’t the only thing that “boomed”. The economy exploded and with it, disposable income. Families bought cars and televisions, bought TV dinners and went on road trips. Sperry & Hutchinson company “Green Stamps” were handed out at department stores, grocery stores and gasoline stations, redeemable for Fabulous Gifts and Prizes. During the 1960s, S&H boasted about producing three times the number of stamps, as the United States Post Office.

Along with all this conspicuous consumption came conspicuous amounts, of litter. Engine oil and other solvents were drained directly into sewer drains to become part, of inland waterways. Garbage was everywhere. The situation became so bad in 1969, Cleveland’s Cayuhoga River, caught fire.

The Santa Barbara oil spill of January and February 1969 killed aquatic wildlife by the tens of thousands and remained for years the largest such spill in American history, eclipsed only by the 1989 Exxon Valdez disaster and the Deepwater Horizon spill, of 2010.

For Wisconsin Democratic Senator Gaylord Nelson, the time was right to bring a lifelong passion for environmental conservation, to center stage. Joined by Republican Congressman Pete McCloskey, the campaigns of 1969 culminated in the first “Earth Day” on April 22, 1970. President Richard Nixon and 1st Lady Pat Nixon planted a tree on the White House lawn, in celebration.

For Earth Day 1971, the nonprofit organization Keep America Beautiful launched the Public Service Announcement the Ad Council later called one of the “50 greatest commercials of all time.”

There he was, Iron Eyes Cody, paddling his canoe down that garbage infested river surrounded by smog, pollution and trash. Stepping onto the junk strewn shore, a bag of rubbish explodes at his feet, carelessly tossed from a passing car. Not a word was spoken, excepting the narrator’s voiceover. Just the actor, turning to the camera, a single tear coursing down his weathered cheek.

The “Crying Indian” ad incited a frenzy of neighborhood action. Cleanup brigades fanned out across the nation, reducing litter by an estimated 88% across 38 states. Iron Eyes Cody was rewarded with two Clio awards and his own star on the Hollywood Walk of fame. The “Face of Native Americans” was plastered across billboards, posters and magazine spots. Advertisers estimate his image was viewed no fewer, than 14 Billion times.

It’s hard to say that anything bad came of the story. The garbage was cleaned up, Hollywood raked in the cash, but Iron Eyes Cody had a secret.

In 1996, a reporter from the New Orleans Times-Picayune took a trip to Gueydan Louisiana and stumbled into that secret. “He just left” recalled Mae Abshire Duhon, Iron Eyes Cody’s sister, “and the next thing we heard was that he had turned Indian.”

Iron Eyes Cody was in fact Espera Oscar de Corti, born April 3, 1904 in rural southwest Louisiana, the second of four children born to Sicilian immigrants Antonio de Corti and Francesca Salpietra. Six years later, Antonio took his three boys and left for Texas, abandoning his wife and daughter. It was there that Cody (Corti) developed an affinity for the windswept deserts and for Native American culture.

In 1919, film producers came to the area to shoot a silent film, “Back to God’s Country”. Oscar was cast as an Indian child.

Following his father’s death five years later, Oscar traveled to California to pursue a career as an actor.

A cynic would call the man’s story a fraud and a fake, and maybe they’re right. Or maybe the transformation was as personal, as real to this Italian American, as it is possible to get. Off camera and on, De Corti portrayed a life borne of the First Nations. “Nearly all my life” he once told reporters, “it has been my policy to help those less fortunate than myself. My foremost endeavors have been with the help of the Great Spirit to dignify my People’s image through humility and love of my country. If I have done that, then I have done all I need to do“.

Iron Eyes Cody died peacefully in 1999 at the age of 94, leaving this poetic tip of the hat to the culture he had adopted, as his own. “Make me ready to stand before you with clean and straight eyes,” he wrote. “When Life fades, as the fading sunset, may our spirits stand before you without shame.”