On the morning of December 14, 1862, Richard Kirkland took as many canteens as he could carry, and stepped into the no man’s land between two watching armies. 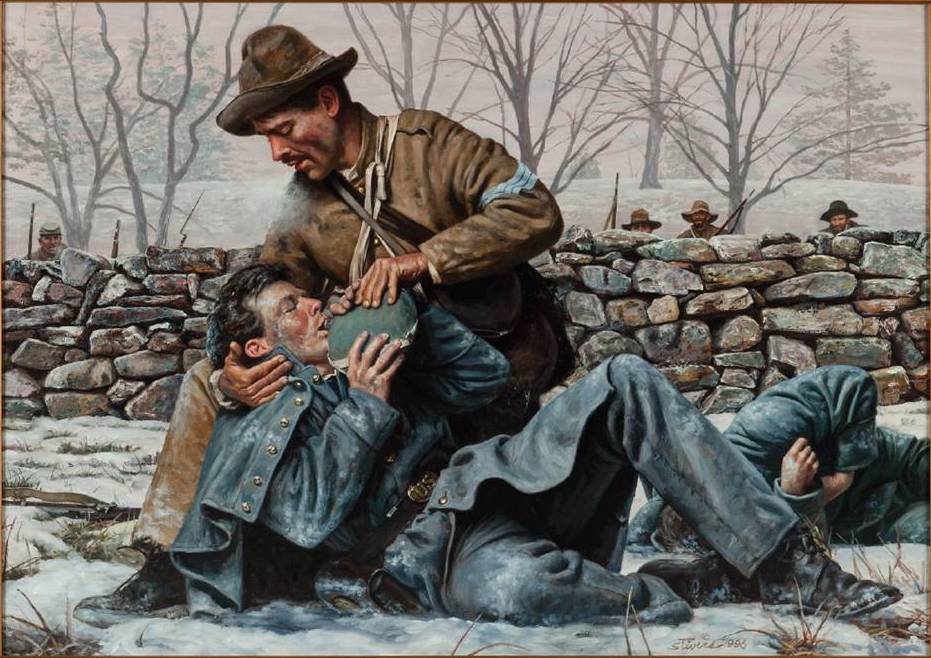 One of the bloodiest battles of the Civil War began on December 11, 1862, when some 200,000 combatants collided in the town of Fredericksburg, Virginia.

The Union crossing of the Rappahannock was intended to be a surprise, depending on pontoons coming down from Washington to meet up with General Ambrose Burnside’s Union army in Falmouth, across the river from Fredericksburg.

The army of the Potomac arrived on November 19 with no sign of pontoons.  When they finally arrived, heavy snows slowed military operations for an additional week.  Lt. General James Longstreet and Lt. General Thomas Jonathan “Stonewall” Jackson had more than enough time to prepare defenses.

Burnside’s crossing began on the morning of December 11, as engineer battalions constructed bridges in the face of determined Confederate fire. Several groups of soldiers had to row across the river, the battle then moving through the streets and buildings of Fredericksburg as Union and Confederate troops fought the first urban combat of the Civil War.

On the morning of the 13th, Robert E. Lee’s Confederate forces occupied a seven-mile curving line, with the five divisions of Longstreet’s Corps on the left along Marye’s Heights, west of town.  Fighting began on both ends of the Confederate position, more or less simultaneously.  George Meade had some early successes against Stonewall Jackson’s dug-in positions on the right, but requested reinforcements never arrived.  By the end of the day, the old farmer’s term “slaughter pen”, had taken on new and heretofore unimaginable horrors.

In contrast to the swampy approaches on the Confederate right, 5,000 soldiers under James Longstreet looked out from behind the stone wall on Marye’s Heights to an open plain, crossed from left to right by a mill run, 5-feet deep, 15-feet wide and filled with 3-feet of freezing water.

Confederate artillery commander Edward Porter Alexander looked out on that field and said “a chicken could not live on that field when we open on it”.  He was right.  For six hours, the Union army threw one attack after another against the rebels behind that wall.  Fourteen attempts.

As the sun went down on the evening of December 13, the ground below Marye’s Heights was carpeted with the mangled, dead and dying bodies of Union soldiers.

The Army of the Potomac suffered over 13,000 casualties at Fredericksburg, about two-thirds of them in front of that wall.  Lee’s army, by comparison, suffered around 4,500 losses.  Watching the great Confederate victory unfold from his hilltop command post, Robert E. Lee intoned, “It is well that war is so terrible, or we should grow too fond of it.”

Union ambulance corps had all they could do to remove their own wounded from the plains looking up on Marye’s heights but dared not enter within Confederate range of fire, in front of that wall.

All through the night of the 13-14th, the pathetic moaning of mangled and dying Union soldiers could be heard along the heights.

It’s easy to imagine that some Confederate soldiers reveled in all that carnage, but not all. The groans and the cries of agony, must have been difficult to hear.  There wasn’t a man among them who didn’t understand that, but for the grace of God, he himself could be out there.

For Sergeant Richard Kirkland, Company G, 2nd South Carolina Infantry, it wasn’t enough to sit and listen.  He could no longer stand to hear “those poor people crying for water”.  Kirkland left his position and made his way to General Joseph Kershaw’s headquarters, to ask permission to help.

On the morning of December 14, 1862, Richard Kirkland took as many canteens as he could carry, and stepped into the no man’s land between two watching armies.  No one fired. None so much as even moved.  Sgt. Kirkland worked his way alone from one wounded man to the next, straightening out a shattered leg here, there spreading out an overcoat, always with a quiet word of encouragement and a drink of water.

Kirkland was out there for no less than an hour and a half.  Alone in no man’s land, under the watchful eyes of two hostile armies. He never left until he had helped every fallen soldier, Federal and Confederate alike, on that part of the battlefield.

General Kershaw later gave this account:  “Unharmed he reached the nearest sufferer. He knelt beside him, tenderly raised the drooping head, rested it gently upon his own noble breast, and poured the precious life-giving fluid down the fever scorched throat. This done, he laid him tenderly down, placed his knapsack under his head, straightened out his broken limb, spread his overcoat over him, replaced his empty canteen with a full one, and turned to another sufferer.”

Richard Kirkland would not survive the war.  He met his end while leading an infantry charge the following September, at a place the Chickasaw called “house or dwelling place of the king.“ Chickamauga. There is no way to know how many lives were saved by the courage, the kindness and the tender mercy of one man, this day in 1862.

Richard Rowland Kirkland is long gone now but the memory lives on. Of that singular act of courage and compassion, of the Angel of Marye’s Heights.