For the United States it was First Blood.  The first American to die in the “War to End all Wars”.

One-hundred and five years ago, the “War to end all Wars” had not yet entered the 9th month.  The war of mobility from 1914 was gone now, replaced by the hundreds of miles of trench-works, destined to characterize the remainder of the war.

Off the battlefield, German and British governments sought control over the waters and thus to choke the economic life, each out of the other.

In 1914, both Germany and the United Kingdom were heavily dependent on foreign trade, not only to feed their own war industries but also to feed civil populations, back at home.

After the war, the German Board of Public Health claimed 763,000 civilian deaths due to disease and starvation, specifically brought about by the blockade.  Ten years later, one academic study put the number at 424,000.

In theory, neutral America was happy to trade with any and all comers but in practice, Britannia ruled the waves, her deep-water surface fleet holding all but undisputed superiority over Atlantic trade routes, the English Channel, and the North Sea.

To the Kaiser’s way of thinking, blockade parity was to come in the shape of a submarine.

Leon Chester Thrasher was an American mining engineer from Hardwick, Massachusetts.  That March, the 31-year-old  was leaving Liverpool, returning to a job on the Gold Coast of British West Africa aboard the cargo-passenger ship RMS Falaba.

The German submarine U-28 stopped Falaba on this day in 1915, later sinking the vessel to the bottom with a single torpedo and killing 104, including Leon Thrasher.

For the United States it was First Blood.  The first American to die in the “War to End all Wars”.

German policy varied over the course of the war, from unrestrained submarine warfare, to strict adherence with international law. U-28 Commander Freiherr Georg-Günther von Forstner claimed to have given Falaba 23 minutes to evacuate, cutting that short and firing his torpedo only in response to Falaba’s distress rockets and wireless pleas for assistance.

British authorities claim Falaba was given only 7 minutes’ warning.  Hardly enough to evacuate 245 passengers and crew. 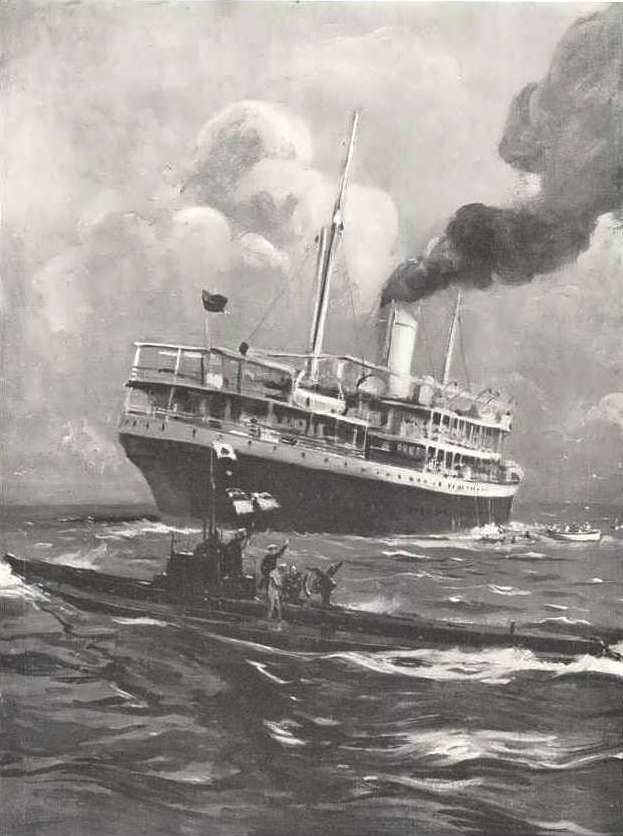 The death of the first American in the European war set off a diplomatic row which threatened for a time to bring the Americans into the war. American newspapers called it the “Thrasher Incident”, denouncing the sinking as a “massacre”. An act of “piracy”.

Germans claimed that secondary explosions within Falaba’s hull proved her to be anything but neutral, carrying some 13*tons of contraband ammunition, intended to kill German boys on European battlefields. Eyewitness accounts failed to settle the matter, but many tended toward the German view. 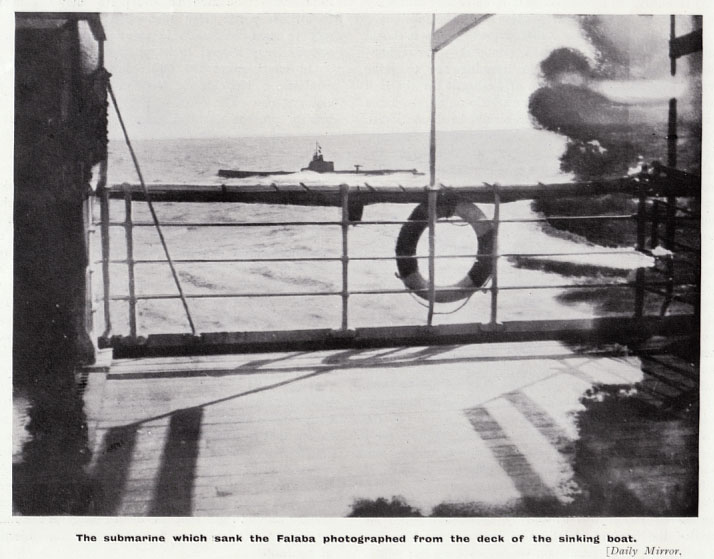 President Woodrow Wilson stayed his hand, winning re-election the following year with the slogan, “He Kept Us Out of War”.

What remained of Leon Thrasher washed ashore on the coast of Ireland in July 1915, following 106 days in the water. Authorities initially believed him to be a victim of the RMS Lusitania sinking, designating the remains, Body No. 248.

The U-boat U-20 had torpedoed the Cunard liner RMS Lusitania off the coast of Ireland only 40 days earlier killing 1,198, 124 of whom were Americans. The US came close to the brink of war that time too, but the last and final straw would not come for another two years.

The United States entered the war in April 1917 as a result of the resumption of unrestricted submarine warfare and a German telegram, to the government of Mexico.