In 1943, Adolf Hitler’s bomb makers concocted an explosive coated in a thin layer of real chocolate and wrapped in expensive black & gold foil labeled “Peter’s Chocolate”. When you break a piece off this thing, you might wonder in the last moments of your life.  What the hell is this canvas doing in a chocolate bar?

In a Spanish dictionary, the word “Bobo” translates as “stupid…daft…naive”. The slang form “bubie” describes a dummy. A dunce. The word came into English sometime around 1590 and spelled “booby”, meaning a slow or stupid person.

In a military context, a booby trap is designed to kill or maim the person who activates a trigger. During the war in Vietnam, Bamboo pit vipers known as “three step snakes” (because that’s all you’ll get) were tucked into backpacks, bamboo sticks or simply hung by their tails, a living trap for the unwary GI.

The soldier who goes to lower that VC flag might pull the halyard rope may hear distant snickering in the jungle, before the fragmentation grenade goes off. Often, the first of his comrades running to the aid of his now shattered body hits the trip wire, setting off a secondary and far larger explosive.

Not to be outdone, the operation code-named “Project Eldest Son” involved CIA and American Green Berets sabotaging rifle and machine gun rounds, in a way that blew the face off the careless Vietcong shooter.

German forces were masters of the booby trap in the waning days of WW1 and WW2. A thin piece of fishing line, connecting the swing of a door with a hidden grenade at your feet. A flushing toilet explodes and kills or maims everyone in the building. The wine bottle over in the corner may be perfectly harmless, but the chair you move to get to it, blows you to bits.

Virtually anything that can be opened or closed, stepped upon or moved in any way, can be rigged to mutilate the unwary, or kill. Fiendish imagination alone, limits the possibilities. Would the “Joe Squaddy” entering the room care if that painting on the wall was askew? Very possibly not but the “officer and a gentleman” may be moved to straighten the thing out at the cost of his hands, or maybe his life.

In the strange and malignant world of Adolf Hitler, the German and British people had much in common.  Are we not all “Anglo-Saxons”?  The two peoples need not make war, he thought, except for their wretched man, Winston Churchill.

Prime Minister Winston Churchill had been a true leader of world-historical proportion, during the darkest days of the war.  To take the man out, just might cripple one of Hitler’s most virulent adversaries.

In 1943, Adolf Hitler’s bomb makers concocted an explosive coated in a thin layer of real chocolate and wrapped in expensive black & gold foil labeled “Peter’s Chocolate”. When you break a piece off this thing, you might wonder in the last moments of your life.  What the hell is this canvas doing in a chocolate bar?

So it was, that Nazi Germany planned to kill the British Prime Minister, by booby trapped chocolate placed in a war cabinet meeting room.

We rarely hear about the work of the spy or the saboteur in times of war. They are the heroes who work behind enemy lines, with little to protect them but their own guts and cleverness. Their work is performed out of sight, yet there were times when the lives of millions hung in the balance, and they never even knew it.

The lives of millions, or perhaps only one.  German agents operating inside the United Kingdom were discovered by British spies, the information sent to MI5 senior intelligence chief, Lord Victor Rothschild.

Lord Rothschild, a scientist in peace and member of the Rothschild banking family immediately grasped the importance of the information.  On this day in 1943, Rothschild typed a letter to illustrator Laurence Fish.  The letter, marked “secret”, begins:

“Dear Fish, I wonder if you could do a drawing for me of an explosive slab of chocolate…”

The letter went on to describe the mechanism and included a crude sketch, requesting the artist bring the thing, to life.

Laurence Fish went on to be a commercial artist and illustrator, best remembered for his travel posters of the 1950s and ’60s.  He always signed his posters, “Laurence”.  Dozens of wartime drawings were quietly forgotten and left in a drawer, for seventy years.

Hitler’s bomb makers devised all manner of havoc, from booby trapped mess tins to time-delay fuses, meant to destroy shipping, at sea.   In 2015, members of the Rothschild family were cleaning out the house, and discovered a trove of Fish’s work. 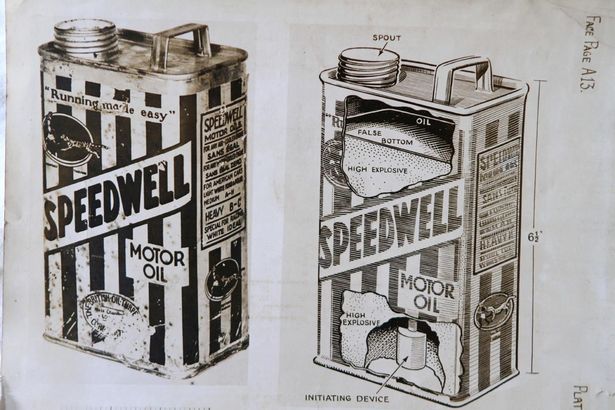 The artist is gone now but his work lives on.  Fish’s illustrations are now in the hands of his widow Jean, an archivist and former journalist living in Winchcombe, Gloucestershire.  Perhaps to be shown one day, in some public archive or museum.

Taken together, Laurence fish’s illustrations represent a precise and hand drawn record of an all but forgotten part of the most destructive war, in history.