The Lancaster Ohio High School junior’s project got a “B Minus”.  He was offended.  A buddy had taped five leaves to a white sheet of paper. His project received an “A”. 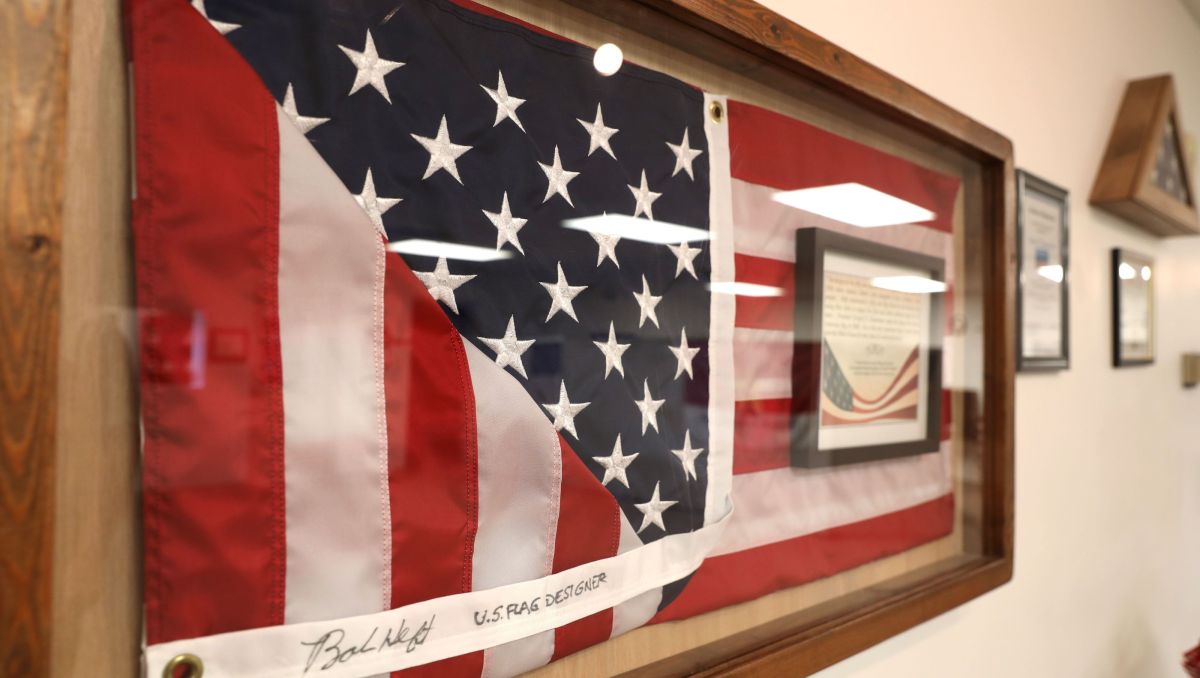 The first distinctly American flag featured the Red Ensign of the United Kingdom of Great Britain, emblazoned with the words “Liberty and Union”, a solemn declaration that the colonies would stick together, and colonist’s rights as British citizens, would not be abridged. First raised above the town square of Taunton Massachusetts on October 19, 1774, the Taunton Flag flies above the “Silver City”, to this day.

The first national flag of the fledgling nation was designed by Philadelphia milliner Margaret Manny, featuring the Union Jack and alternating red and white stripes, symbolizing the thirteen original colonies.  The “Continental Colors” were first raised on December 3, 1775 above the United States Navy’s first flagship USS Alfred along with the “Don’t Tread on Me” of the Gadsden flag, the personal ensign of the Navy’s first Commodore, Esek Hopkins.

Boston loyalists had just received copies of a conciliatory speech delivered by King George III when Manny’s “Grand Union” was raised above the siege of Boston on January 2, 1776.  British observers took the display to be a sign of surrender, leading many to think of a more uniquely American banner. 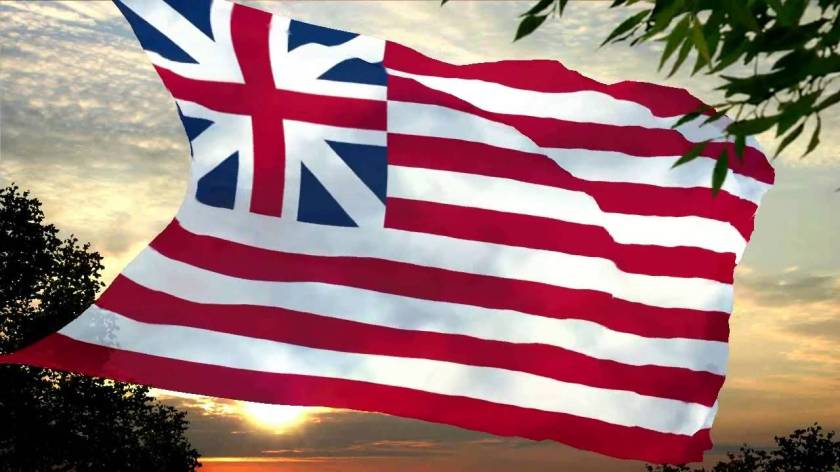 History fades into mythology during the confusion of early 1776, when the Continental Congress authorized the Commander-in-Chief $50,000 to acquire “sundry articles for use in the continental army,” including “colours.” According to legend, Washington traveled with English born merchant and founding father Robert Morris to the Philadelphia upholstery shop of George and Elizabeth Ross, with a design for thirteen red and white stripes and as many six-pointed stars, on a field of blue.

“Betsy” Ross showed the group how, by folding in a certain way, a five-point star could be fashioned with a single cut of her shears.  The first “Star Spangled banner”, was born.

Surprisingly, there exists no “official” symbolism behind the Red, White and Blue.  In 1782, the Congress of the Confederation chose those same colors for the Great Seal of the United States describing the meaning of each, as follows:

According to legend, Washington himself interpreted the stars as coming from the sky, the red from the British colors with the white stripes signifying secession from the home country.

Since that day in 1776, flag makers have simply added stars, with every new state. Or so it would seem, but it’s not that simple. Each new flag is its own careful design, the arrangement of each star, precise and symmetrical.

The sun that rose on this day in 1958, shone down on a flag containing 48 stars. Alaska and Hawaii would not be admitted, until the following year.

Robert G. Heft was a high school junior at that time, and a Boy Scout with Troop 113 in Lancaster, Ohio. Alaska and Hawaii were in the news at that time.  Heft thought it was just a matter of time, and they would become #49 and 50. When the History teacher assigned a school project, the boy knew what he wanted to do. “I had never sewn in my life,” Heft told StoryCorps in 2009. “I watched my mom sew, but I had never sewn. And since making the flag of our country, I’ve never sewn again.” He went home and he found a pair of scissors. It could not have thrilled his parents to find him in the kitchen, cutting up their flag.

“The teacher said, ‘What’s this thing on my desk?’” Heft later explained, “And so I got up and I approached the desk and my knees were knocking.  He said, ‘Why you got too many stars? You don’t even know how many states we have.’”

Heft was bent out of shape.  His project had gotten a “B Minus”.   A buddy had labeled and taped five leaves to a white sheet of paper. His project received an “A”.

“If you don’t like the grade, get it accepted in Washington,” the teacher said “Then come back and see me. I might consider changing the grade.”

Two years came and went, along with twenty-one letters to the White House, and eighteen phone calls.

And then came the phone call, at work. The operator. The President of the United States wants to talk to you.

The voice that came over  the line, was that of Dwight David Eisenhower.

“Is this Robert G. Heft?”
“Yes, sir, but you can just call me Bob.”
“I want to know the possibility of you coming to Washington, D.C., on July Fourth for the official adoption of the new flag.”

Heft put the President of the United States on hold and worried to his boss. “Dwight” wants me to come to Washington.  I don’t have any time off. 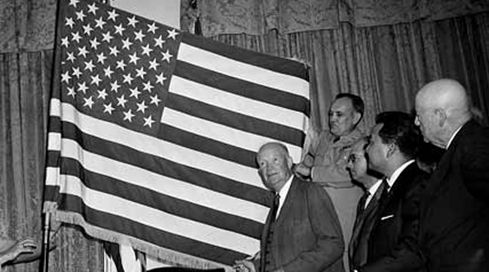 Needless to say, the Boss figured a way.  Heft’s design had been chosen, over 1,500 others.  So it is that a Boy Scout and a High School Junior, designed the flag we all know, as the Star spangled banner.   Bob Heft passed away in 2009.  It is his flag we salute, to this day.

35-year-old lawyer and amateur poet Francis Scott Key wrote the words for the “Star-Spangled Banner”on September 14, 1814, on the back on an envelope. The words were later set to the music of an 18th century English drinking song called “To Anacreon in Heaven.”