The Dickin Medal has been awarded 71 times since its inception, recipients including 34 dogs, 32 pigeons, 4 horses and, to date, one cat.  A ship’s cat, the champion rat killer of the Yangtze, Simon.

Mankind first crossed the line from hunter-gatherer to farmer, some ten thousand years ago. The earliest civilization known mainly for agricultural subsistence is the naturally well-watered region around Jericho, circa 8000BC. From that day to this, grain stockpiles and domesticated livestock have attracted vermin.  With that came the wild ancestor of the common house cat, Felis silvestris catus.

From the earliest times when man took to the sea, food stores were an attractive free ride, for rodents.

Rats reach sexual maturity in as little as four to five weeks and complete the act of procreation, in the blink of an eye. Litters average 8 to 14 “kittens” and run as high, as 21. With an average gestation period of only 21 to 23 days, rat infestations get out of hand with shocking rapidity.

Left uncontrolled, rats and mice can destroy ship’s stores in a matter of weeks. The “ship’s cat” was a feature of life at sea from the earliest days, first controlling damage to pantries, ropes and woodwork and, in more modern times, electrical wiring.  To say nothing, of rat-borne disease.

Not without reason, are cats seen as good luck at sea. The power of cats to land upright is due to extraordinarily sensitive inner ears, able to detect even minor changes in barometric pressure. Sailors paid careful attention to the cat’s behavior, often the first sign of foul weather ahead. 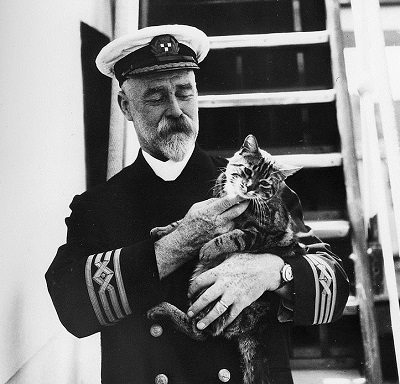 Once driven nearly to extinction, the Norwegian Forest cat (Norwegian: Norsk skogkatt) is believed to descend from Viking-era ship’s cats, brought to the Scandinavian peninsula from the modern-day United Kingdom, sometime in the first millennium.

“Simon” was found in 1948, one of countless and nameless cats roaming the dockyards of Stonecutter’s Island, in Hong Kong. He was about a year old at that time, a sickly little waif, smuggled on board the HMS Amethyst by 17-year-old Ordinary Seaman, George Hickinbottom. Lieutenant Commander Ian Griffiths liked cats, and well understood the threat posed by rodents, in the hot and humid weather in that time and place.  Happily, the job of ship’s cat was open at that time, however (says Hickinbottom), ‘He warned me that if he saw any muck on board, he’d have me up on a charge.’ The crew made sure any ‘muck’ was quietly tossed overboard.

Simon quickly earned the admiration of the Amethyst crew, with his prowess as a rat killer. Seamen learned to check their beds for “presents” of dead rats while Simon himself could usually be found, curled up and sleeping in the Captain’s cap.

The first mission assigned to incoming Skipper Bernard Skinner was to travel up the Yangtze River to Nanjing to replace the duty ship HMS Consort, then standing guard over the British embassy.  On this day in 1949 and only a hundred miles upriver, Amethyst came under fire from the People’s Liberation Army (PLA).

Amethyst returned fire but it wasn’t long before she was disabled, run aground with most of her guns too high to return fire.  The first salvo from the Communist guns exploded in the Captain’s quarters, mortally wounding Commander Skinner and badly injuring the ship’s cat.

By 9:30, wounded First Lieutenant Geoffrey L. Weston made his last transmission: “Under heavy fire. Am aground in approx. position 31.10′ North 119.20′ East. Large number of casualties”.

The order was given to evacuate and some managed to swim to the Nationalist side, despite fire from Communist batteries. For the rest, the following three months turned to a tense and deadly standoff known as the Amethyst Incident.

Simon was brought to the sick bay, where surviving members of the medical staff removed four pieces of shrapnel from his body and dressed his burned flesh and singed fur.  He was not expected to make it through the night.

As the weeks dragged to months, Simon did not die but recovered and resumed his duties, below decks.  A good thing it was, too.  The trapped and cornered vessel was overrun, with vermin.  Simon returned to his work with a vengeance, even earning the fanciful rank of “Able Sea Cat” after killing one notorious rat known as Mao Tse-tung.

The Amethyst incident resulted in the death of 47 British seamen with another 74, wounded. HMS Amethyst herself sustained heavy damage in the episode.  The heavy cruiser HMS London, the destroyer HMS Consort and the sloop HMS Black Swan were also damaged.

Unseen amidst the economic devastation of World War One, the domesticated animals of Great Britain were in desperate straits. Turn-of-the-century social reformer Maria Elizabeth “Mia” Dickin founded the People’s Dispensary for Sick Animals (PDSA) in 1917, working to lighten the dreadful state of animal health in Whitechapel, London. To this day, the PDSA is one of the largest veterinary charities in the United Kingdom, conducting over a million free veterinary consultations, every year.

The “Dickin Medal” was instituted on December 2, 1943, honoring the work performed by animals in World War Two.  The “animal’s Victoria Cross”, it is equivalent to the highest accolade in the British system of military honors, comparable to the American Medal of Honor.

The Dickin Medal has been awarded 71 times since its inception, recipients including 34 dogs, 32 pigeons, 4 horses and, to date, one cat.  A ship’s cat, the champion rat killer of the Yangtze, Simon.

Simon returned to accolades in Great Britain, awarded a Blue Cross medal, the Amethyst campaign medal and Naval General Service Medal with Yangtze clasp.  Unhappily, Simon did not survive his war wounds, after all.  Required to be placed in quarantine like any animal entering the United Kingdom, Simon succumbed to complications of his injuries and died on November 28, 1949.

Hundreds attended Simon’s funeral at the PDSA Ilford Animal Cemetery in east London, including the entire crew of HMS Amethyst. These words were inscribed on the stone, which marks his grave:

IN
MEMORY OF
“SIMON”
SERVED IN
H.M.S. AMETHYST
MAY 1948 — NOVEMBER 1949
AWARDED DICKIN MEDAL
AUGUST 1949
DIED 28TH NOVEMBER 1949.
THROUGHOUT THE YANGTZE INCIDENT
HIS BEHAVIOUR WAS OF THE HIGHEST ORDER

“Oskar” was plucked from the ocean on May 27, 1941 by sailors from HMS Cossack, following the sinking of the German Battleship, Bismarck. So named from the International Code of Signals for the letter ‘O’, code for “Man Overboard”, Oskar became ship’s cat aboard the British warship until October 27 when a German torpedo blew off the forward one-third of the destroyer, killing 159 sailors. Oskar survived this disaster as well, making his way to land and thence to the British aircraft carrier HMS Ark Royal and dubbed “Unsinkable Sam”. The mighty carrier was herself sunk by a German torpedo on November 14, leaving Unsinkable Sam “angry but quite unharmed” clinging to a plank, in open ocean. World War Two would would rage for another four years, but not this particular ship’s cat. A superstitious lot, no sailor wanted any part of a shipmate who’d been through three wrecks. Sam was transferred first to the Governor of Gibraltar and then back to the United Kingdom where he lived out the rest of his days, at the “Home for Sailors”, in Belfast.