In the 1850s, then-Secretary of War Jefferson Davis was convinced that camels were the military super weapon of the future. 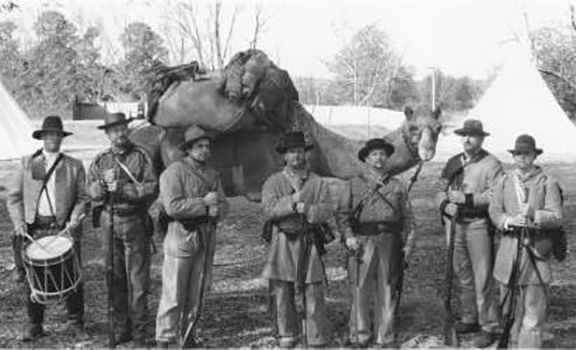 The Cedar Hill Cemetery in Vicksburg contains some 5,000 stone markers in ‘the soldier’s rest‘, each placed in memory of one who died in defense of the city.  Even the one with the camel on it. 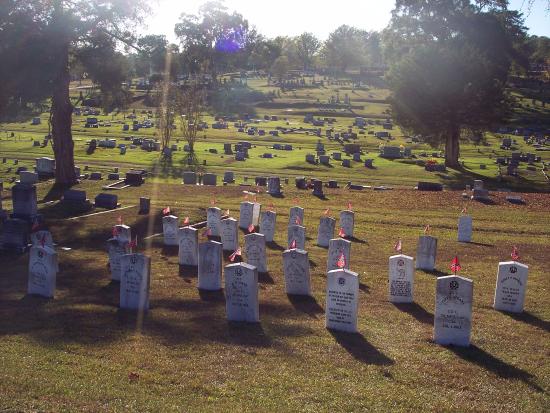 This story begins with Jefferson Davis, in the 1840s. Today, we remember Davis as the one President of the Confederate States of America. Then, he was a United States Senator from Mississippi, with a pet project of introducing camels into the United States.

Re-introducing them might be more like it. Today, the distribution of these animals is almost the inverse of their area of origin. According to the fossil record, the earliest camelids first appeared on the North American continent, these even-toed ungulates ancestor to the Alpaca, Llama, Guanaco and Vicuña of today. 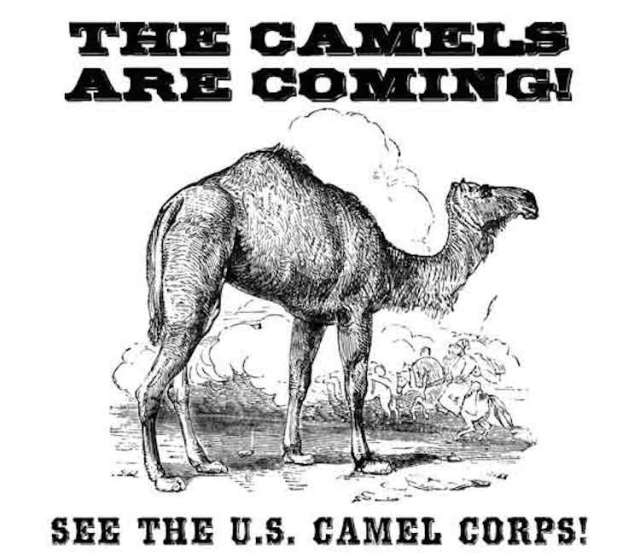 Davis envisioned the day when every southern planter would have a stable full of camels. In the kind of pork barrel tit-for-tat spending deal beloved of Congressmen to this day, the Senator slid $30,000 into a highway appropriations bill, to get the support of a colleague from Illinois. 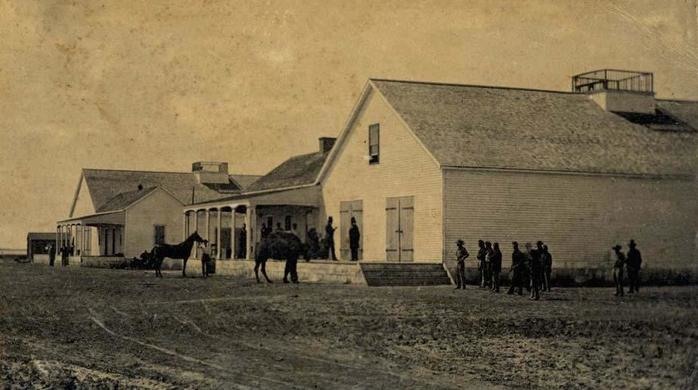 The measure failed but, in the 1850s, then-Secretary of War Davis persuaded President Franklin Pierce that camels were the military super weapons of the future. Able to carry greater loads over longer distances than any other pack animal, Davis saw camels as the high tech weapon of the age. Hundreds of horses and mules were dying in the hot, dry conditions of Southwestern Cavalry outposts, when the government purchased 75 camels from Algeria, Tunisia and Egypt. Several camel handlers came along in the bargain, one of them a Syrian named Haji Ali, who successfully implemented a camel breeding program. Haji Ali became quite the celebrity within the West Texas outpost. The soldiers called him “Hi Jolly”.

When Civil War broke out, Camp Verde Texas had about 60 camels. The King of Siam, (now Thailand), saw the military advantage to the Confederacy, and wrote to President Abraham Lincoln. “Here”, he wrote, “we use elephants”. The King went on to propose bringing elephants into the Northwest, to help the Union war effort. This “animal arms race” appears to have gotten no further than the King’s letter to the President, but the imagination runs wild at the idea of War Elephants at Gettysburg. 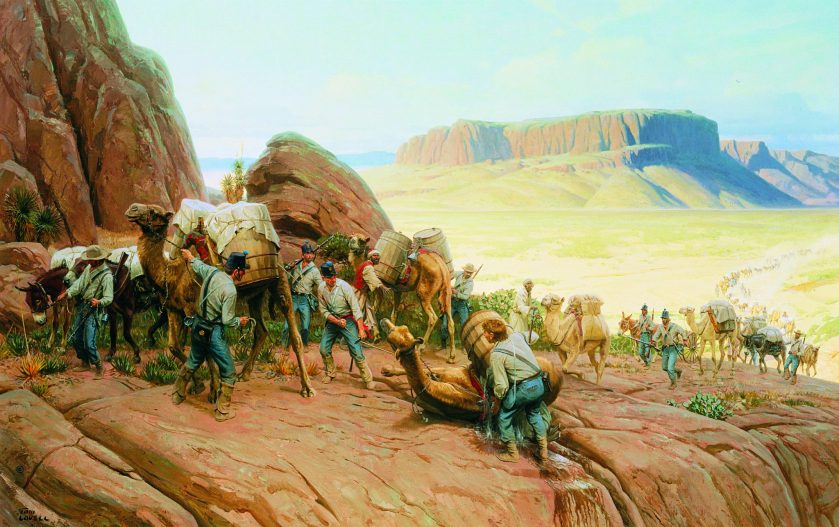 The horse lobby did a lot to kill the camel project, and the animal’s unpleasant personality traits didn’t help. A camel will not passively accept a riding crop or a whip. They are vengeful, and can spit stinking wads of phlegm with great accuracy over considerable distances. If they’re close enough, they will rake the skin off your face with their front teeth. Camels have been known to trample people to death.

Douglas wouldn’t permit himself to be tethered, but he always stuck around so he was allowed to graze on his own. Southern soldiers became accustomed to the sight of “Old Douglas”. The 43rd Mississippi became known as the “Camel Regiment,” but the horses never did get used to their new companion. On this day in 1862, Major General Sterling Price was preparing to face two Union armies at Iuka, when the sight of Old Douglas spooked the regimental horses. One horse’s panic turned into a stampede, injuring several of them and possibly killing one or two. 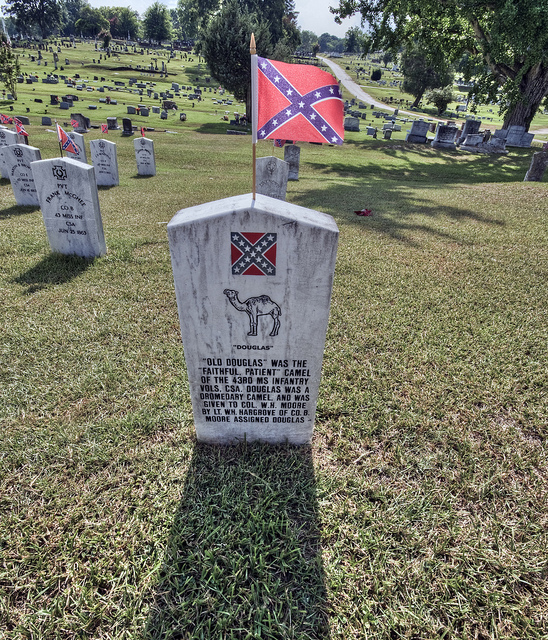 So it is that there is a camel at the Cedar Hill Cemetery in Vicksburg, Mississippi. He is not forgotten. Douglas and other camels of the era are remembered by the Texas Camel Corps, a cross between a zoo and a living history exhibit.

The organization’s website begins with: “Texas Camel Corps was established to educate the public about the historic use of camels in America in the 19th century”. I just might have to check that out. 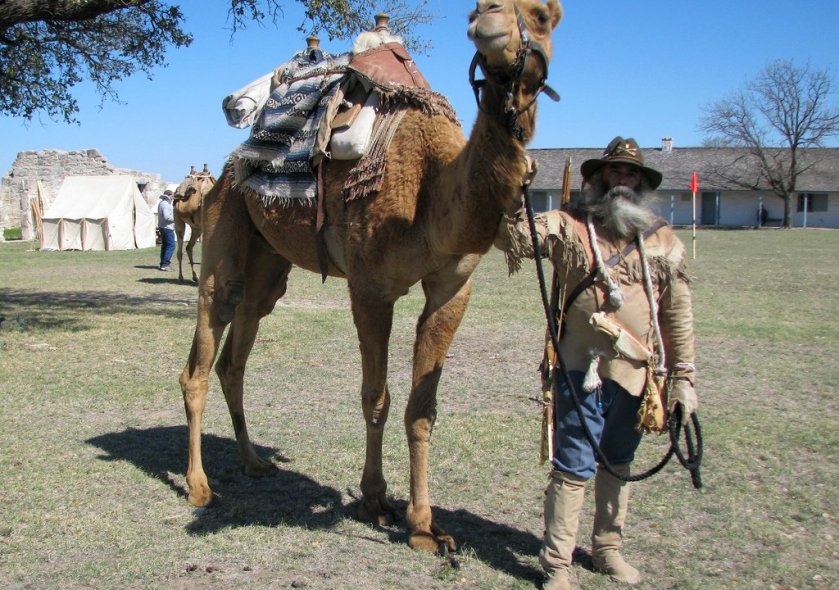